M-Audio's aim for the BX5 D2 was to make a studio monitor that's compact but doesn't compromise on sound. Have they succeeded? 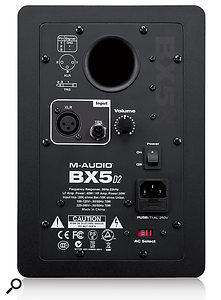 The rear panel houses the input jack and XLR sockets, as well as the input gain control.

Despite today's crowded marketplace, new nearfield monitors just seem to keep on coming, this latest model from M-Audio being aimed at the smaller project studio, where compact desktop speakers are needed. Each cabinet measures 252 x 176 x 195mm (HxWxD), weighs in at 5kg, and is attractively finished in satin-black vinyl laminate. The reassuringly solid cabinets have rounded corners, for reduced edge diffraction, and a neat touch is a recessed power LED on the front of each speaker. These show at their brightest when you're in the correct listening position and the speakers are angled properly.

As with the majority of nearfield compact speakers, the cabinets are ported to make the most of the low end. On these, the flared port is on the rear panel, to avoid port noise being directed towards the listening position. Overall, these look like solidly engineered little speakers that follow established two-way, active, ported principles.

The BX5 D2 is a bi-amplified design, with two Class-A/B amplifiers providing a total of 70 Watts of power. A 40W amplifier feeds a five-inch low-frequency/mid-range driver, and the one-inch, silk-dome tweeter has its own 30W amp (the crossover frequency is set at 3kHz). Both drivers are recessed flush with the sculpted front baffle, and the edge of the woofer opening is flared to provide a smooth transition from the roll surround to the baffle. The woofer has a curved, conical cone, fabricated from woven Kevlar and supported in a rubber surround. The literature states that the high-temperature voice-coil design reduces power compression effects, which otherwise reduce efficiency when the speakers get hot through heavy use.

Internal control circuitry helps to protect the speakers from damage: a subsonic filter keeps out the extreme low frequencies that might otherwise stress the speakers unnecessarily, while RF filtering keeps out frequencies above the audio range. The circuitry also avoids thumps during power up or down, and there's amplifier protection against overheating or over-current.

The speakers are equipped with separate jack and balanced XLR inputs, and the jack may be used with either unbalanced or balanced signals. A volume pot sets input gain, but there are no EQ switches or other frequency adjustments. Power comes in on the usual IEC socket, and there's a power switch on the rear panel, along with a voltage selector for 115/230V operation. There's no external heat sink — the metal rear panel provides the only heat‑dissipation path.

The quoted frequency response for these speakers is 53Hz to 22kHz, though no tolerance figures are given. There's also no maximum SPL quoted. 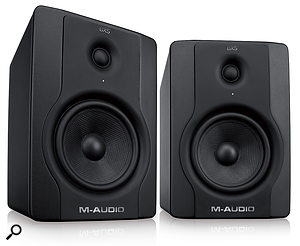 It's easy to hear the shortcomings in any small speaker when it's compared directly with a really good-quality, full-range studio monitor, but given their size and pricing, these monitors perform surprisingly well. Yes, the bass end is less extended than you'd expect from a big monitor, and what bass you do hear suffers from the inevitable time-smearing effects of a small, ported cabinet, but the speakers still deliver a real sense of weight, and they actually sound tighter when played at moderate volumes than they do at very low levels.

High frequencies can sound a touch reedy, especially on edgy vocals, but othewise vocals come across as quite natural-sounding. You can hear plenty of detail in mixes, and there's also the good stereo imaging associated with small speakers. Separation between instruments, while not in the same league as from full-range monitors, is good for this class of speaker, and the impression you get of a mix is pretty realistic. There's a slight emphasis on the mid-range — but then that's pretty much what you'd expect from a small-box design like this.

Overall, these speakers go as loud as you'd realistically need them to go in a nearfield environment, and they deliver a reasonably true impression of mix balances. Such shortcomings as they have are likely to make you work harder on your mix to keep the mid-range clean and the highs smooth-sounding — which is actually no bad thing.

The lack of deep bass extension makes any small speaker of this type less useful as a main monitor for mixing dance music, but for general pop, rock or acoustic work, they should do the job nicely. There is a lot of competition in this price sector, but the performance of the BX5 D2s suggests that they should be added to your list of speakers to check out if you're in the market for a pair of small nearfield monitors.

At the budget end of the range, the Alesis Monitor 1 Mk IIA and the Fostex PM-series monitors always score highly, as do the Tannoy Reveals. Also look at the KRK Rokit RP6 G2, the Edirol MA 15D and the Samson Resolv A5.

Few nearfield monitors deliver ideal performance in all areas, but if your mix sounds good on the BX5 D2s and also checks out on headphones, there shouldn't be much wrong with it.