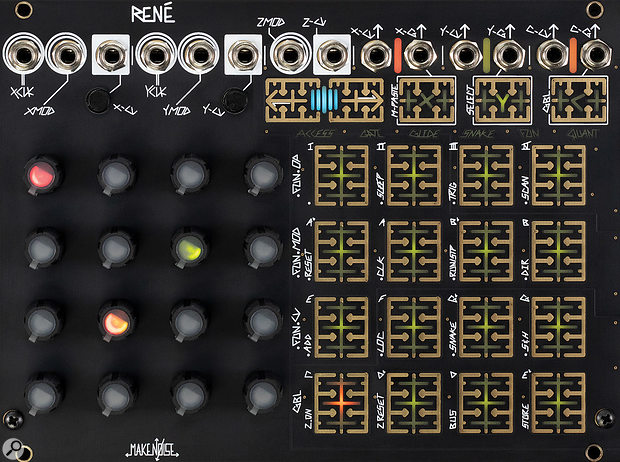 Make Noise proudly promote the René as "the world's only 3D Cartesian Music Sequencer". I had no idea either, but it's been fun finding out.

The first incarnation of Make Noise's flagship sequencer module was released back in 2011. This new version takes the concepts introduced by the original and multiplies them by three.

A brief recap. The original René was a 4x4 grid of knobs with a matching grid of touch-plates. No change there. The knobs adjust step values and the touch-plates provide a variety of functions including gates, skips, quantisation and more. The X and Y axes of the sequencer can be clocked separately, allowing for complex sequences that are far longer than 16 steps. For example, if you clock only the X axis, your sequence will be four steps long and consist of the bottom row of four values looping endlessly. When the Y clock input receives a trigger, the sequencer moves up a row. By combining separate clock divisions or triggers to the X and Y clock inputs, real-time non-linear sequencing is possible. This is Cartesian sequencing, named after French philosopher and mathematician René Descartes, who developed the coordinate system.

That base concept represents just one of René 2018's three channels: X, Y and C. Each one represents a separate sequence with independent values, gate patterns, skip patterns and CV/gate outputs. X and Y are sequences clocked from their respective clock inputs and C is the Cartesian sequencer which is clocked using both the X and Y clocks as described above.

Channels are selected using the X, Y or C touch-plates towards the top of the module. Then a pair of left/right touch-plates flip through pages of functions that apply to the 4x4 touch-plate grid. A handy label lights up to show you which function is currently active.

For the sake of clarity, I'll ignore the physical order of the functions and explain them in order of complexity instead. Gate allows you to decide whether or not each step outputs a gate at its corresponding gate output. Access, which on most other sequencers would be called Skip, revokes access to a particular step when disabled. Slide causes a fixed length CV slide from one step to another. Quant turns the 4x4 grid into a note selector that allows you select or deselect notes for inclusion in the quantised CV output. A thoughtful addition here is the ability to restrict a quantised output to a range of octaves from one to four — useful for instantly placing the huge range of the CV output into a musical range for bass, leads, etc.

Now come the really interesting pages. Snake jumbles up the order of the steps in preset patterns. The feature is presumably named after the retro computer game, as the patterns often resemble the pixelated protagonist's meanderings. Snake is a great way to non-destructively remix a pattern. It will work on channels X and Y, but not on channel C as that channel takes its path directly from the other two.

The final page is called Fun and contains a range of functions toggled or triggered by the touch-plates. This includes options to use each channel's CV and Mod inputs in different ways. The Mod input can be used as either a sequencer reset, run/stop, direction or an additional clock input. The CV input, with its trimmer pot, can be used for transposing the channel's sequence, direct step location access or Snake pattern selection.

On top of this mountain of sequencing madness are the States — presets to you and me. A State saves all three sequences and their respective Fun settings. State switching can be clocked or automated using the Z-Mod or Z-CV inputs, or done directly from the touch-plates. Sixty four States can be saved, an improvement over the original René's 16. There are copy and paste functions so that you can create variations of patterns easily.

I found myself using René in one of two fundamental ways. Firstly, as a simple sequencer. It is quick and easy to get straightforward sequences from the X and Y channels, perhaps using the Access, Gate and Quant functions to add finesse. You get predictable outputs and you can dial in precise values or notes where needed. The second approach is to let René run wild, use the Snake, Cartesian channel and more esoteric functions to come up with sequences which are totally unpredictable whilst remaining musical. Sequences born in this way can be difficult to edit precisely but will spit out melodies and CV streams that you would never have programmed intentionally.

There are so many ways to skin the proverbial cat when it comes to external control and manipulation. For example, just as I was wrapping up this review, it occurred to me that I could use a joystick controller to control the exact location of the current step in the C channel's 4x4 grid by connecting a joystick's X and Y outputs to the X and Y CV inputs and putting them both in LOC (location) mode. The current step of the C channel then followed the exact plot of the joystick on its X and Y axes. Very cool!

René 2018 is clearly a labour of love. It's beautifully thought out and encourages experimentation without relinquishing control. The generous new functionality over the original René will rightly tempt a lot of fans to upgrade. The more advanced functions will require some re-reading of the relevant manual chapters to be fully grasped, but you will be rewarded with a module that encapsulates all that is good about modular sequencing and you'll be finding new and inspiring ways to use it for a long time.