On review here are two of Sicilian company MC AudioLab’s offerings for the popular 500–series format: the MP1 transistor–based mic preamp, and the OC1, an interesting take on optical compression. Although fellow contributor Bob Thomas reviewed their TP1tp rackmount preamp back in SOS May 2011 (http://sosm.ag/mcaudiolab-tp1tp), and they’re well-enough regarded in their country that fellow Italian manufacturers Sknote have gone to the bother of creating a plug–in to model their tube EQ, this was the first time I’d had the opportunity to play with any of this company’s products.

The 500–series market is now a very competitive one, with new modules coming out seemingly every week and, recently, some manufacturers adding aggressively priced options to their range. A relatively unknown manufacturer needs to do something to make themselves stand out, then, and the most obviously striking way MC AudioLab have chosen to do this is to paint their modules a very bright fuchsia colour. The uniqueness is more than skin-deep, though, because the design for the OC1 Compressor is quite unusual, as I’ll explain later. These units are also quite keenly priced, considering the quality on offer. Is all this enough to persuade potential users to try something a little different? Let’s find out...

Looking at the MP1 preamp first, the bold colour choice meant it stood out in my 500–series chassis. Although I wouldn’t say that it looked or felt particularly expensive, it has a reassuringly handmade feel, good, solid switches and controls, and features a proprietary discrete op amp. All the facilities you’d normally want in a preamp are included: 48V phantom power, 20dB pad and polarity–invert switches and a high–impedance class-A transistor DI input are all arranged in a sensible, no–frills layout on the front panel. The preamp is capable of adding 60dB of gain, which should be enough for most sources, the exception being very low-output mics used on quiet sound sources — in which scenario I’d suggest that your first task would be to reconsider your mic choice! A small four–LED meter informs you when a signal is present, at roughly what level and when it’s approaching clipping. 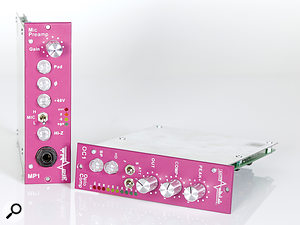 I threw the MP1 straight into action to capture a variety of sources in a busy tracking session. Its first port of call was on toms and, later, hi–hat, on a drum recording. In both roles it produced a nice and clear but full sound, which seemed pretty neutral — in other words it delivered highly usable results. Moving on to electric guitars, I tried first a Shure SM57 moving–coil dynamic mic, and later a Beyerdynamic M160 ribbon mic on a guitar cabinet. The guitar style was fairly clean, and with either mic the MP1 seemed very at ease. If asked to make a comparison, I’d liken the sound of this preamp to that of the Focusrite ISA range, in that the sound is really quite neutral, but there’s just that hint of something warming the sonic character of the source — perhaps that’s to do with the fact that both designs employ Lundahl transformers to handle the input stage.

Like the ISA range, the MP1 also has a switchable impedance setting, in this case giving you the straightforward option of ‘high’ or ‘low’. I noticed a very subtle difference when going between the two — the higher setting made things a little brighter and leaner. Although subtle, this could be a useful option when recording guitars and vocals in particular.

The source on which I thought the MP1 really shone, though, was bass guitar, recorded not via a mic (not that there was anything wrong with that) but via the DI input on the front panel. Used for clean gain the sound was nice and full, but when ‘driven’ harder with higher levels at the input, the sound broke up in a really pleasing way; it did the overdriven bass ‘thing’ better than some of my much more expensive preamps. My only gripe would be with the basic metering. If you record a lot of bass via DI, though, and you’re a fan of overdriven bass tones in particular, it would be well worth checking this out.

Typically, I throw new processors in at the deep end on a session, without a glance at the manual. In the case of the OC1 compressor, though, while the layout appears clean and simple, closer inspection reveals unconventional control names and metering. It’s definitely helpful to understand more about the nature of this compressor before using it.

The MP1 microphone preamplifier, which doubles up as an excellent bass DI.Pulse–width modulation is used to control the gain element, an approach in which the signal in the control circuit is switched on and off very quickly to control the audio energy. The main advantage is that it’s possible to make the distortion products of compression more linear, and thus the sound of the compression smoother and more transparent than with other designs. This approach is already used to good effect by both Dave Hill and Great River but their designs are FET compressors, whereas this one employs a fast-reacting combination of LED and LDR (light-dependent resistor). I’m not aware of another optical compressor that operates in this way.

The meter’s ‘CR’ label stands for ‘compression ratio’ and its scale runs from 0–100. Rather than display gain reduction in decibels, as I’d normally expect, the level of the compressed signal is expressed in relation to the source level — if the meter were displaying 10 on the scale, for example, that would mean that the compressed signal was 10 percent lower in level than the signal at the compressor’s input. The idea is both to make the meter easy and intuitive to read and to encourage the user to rely more on their ears than their eyes.

The Peak control governs the amplitude of the modulated square wave, which is used to control the brightness of the LED in the opto circuit. Increasing the Peak setting therefore effectively lowers the threshold. The Comp control sets the ratio, but gentle ratios (5:1 and lower) are achieved over a very limited range — between about seven and 11 o’clock. It’s well into limiting at the 12 o’clock position and above that the result is a kind of ‘over-compression’, whereby a very loud input produces a quieter output than a quiet input! A kind of inverse dynamic. It’s a very unusual characteristic, which can produce some interesting effects. 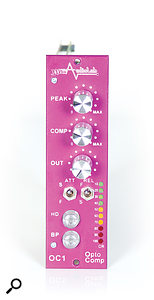 The OC1 optical compressor, which features an unusual ‘compression ratio’ meter.More conventional are the make-up gain control and the simple options of ‘fast’ or ‘slow’ attack and release times. Also featured is an HD button, which offers ‘soft’ or ‘hard’ compression by engaging a 100Hz high-pass filter in the gain-control signal. With the soft setting selected, the compressor does not respond to low-frequency content, the idea being that this allows the compressor to be used to give more assertive control of the mid-range whilst retaining the smooth, effortless compression character.

Once I’d grown accustomed to operating the OC1’s controls, I found it to be highly effective in controlling a range of different material.

I first tried the OC1 on transient–rich sources, including kick and snare drums, and was impressed with the natural way in which I was able to ‘fill out’ and control the drums when using this processor quite subtly. Once the compression got above about 10–15 percent, the result seemed a little less stable, but engaging the high–pass filter on the gain–reduction circuitry gave me more control. I also put the OC1 to use on male and female vocals and, again, I found that when I used it fairly moderately I was able to get the vocals sitting much better in my mix, without being able to detect any unwanted compression artifacts. That, usually, is precisely what I want from a vocal compressor! I formed similar impressions when using this device on an acoustic guitar.

The only general issue I experienced in terms of control was that the attack and release options felt a little crude to me — they’re adequate, but I did feel that more options or possibly a variable setting would have been nice. 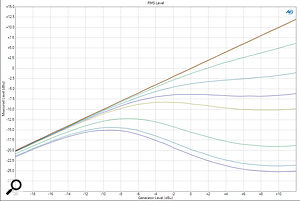 This graph shows the input versus output levels for different ‘Comp’ control settings with the ‘Peak’ control at the 12 o’clock position. The latter establishes a ‘threshold’ of compression at around -12dBu. With the Comp control fully counter-clockwise (seven o’clock) there’s no compression, but higher settings, up to about 11 o’clock, introduce a range of low ratios with a soft-knee characteristic. By the 12 o’clock position the compressor reaches a limiting behaviour. The most interesting behaviour occurs for higher Comp settings, with a pronounced ‘over-compression’ effect, where the output level is turned down substantially.My lasting general impression of the OC1, then, is of a compressor that works nicely for subtle–to–moderate amounts of transparent compression on most sources. It’s trickier striking the right balance when being really aggressive with the compression, but I suspect that it could be useful in a lot more scenarios once you’ve had enough time to really get to grips with the design and this style of compression.

Because it’s different from most compressors, I think it would take most people a while to become comfortable enough with the OC1 to use it while tracking. But it was an enjoyable unit to mix with and, thankfully, this is not one of the many 500–series compressors which should come bundled with a magnifying glass to adjust anything! Familiarity would, I am sure, soon overcome any of the concerns I’ve discussed. In short, while this compressor might present an interesting learning curve, it offers remarkably distortion–free gain reduction and it’s great to see a company offering something a bit more adventurous than yet another yesteryear clone.

Both of these hand–assembled modules are very capable and clean–sounding devices. The pink livery isn’t the only thing to make them stand out: the compressor, which combines a PWM approach to gain control with optical compression, is particularly interesting, and possibly unique. However, I suspect that it will present a challenging learning curve for some.