For those not up with the sub-genres of electronic music, Neuro (or Neurofunk) is a form of drum and bass that mixes techno and house influences with distorted synths. Getting their dark dirt on are the Loopmasters with this set of Neuro drum & bass samples. Weighing in at 650MB, this collection is split between loops and hits/multisamples. 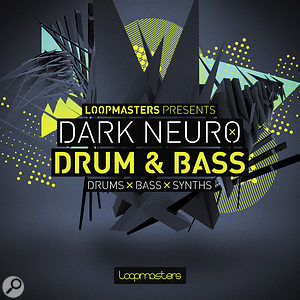 Starting with the 170 loops (also included in REX format), these are split into three folders: bass, drum and music. The bass loops, from the outset, are happy to get in your face and have some real attitude to them.

The music loops follow in a similar vein — more cutting, buzzing synth action with a few more subtle dark atmospheres thrown in. Mixing the cutting and atmospheric really makes these music loops stand out as the stars of this collection. The aggressive, buzzy lines really rip, some future rave-like liquid synth lines nastily snake about, whilst the more restrained textures add a nice sense of darkness.

Beats are split into three variations: Full, Kick Snare and Topline. This adds a layer of flexibility to chop and change between the loops as well as making breakdowns and drops much easier. Sound wise, the beats themselves are programmed in keeping with the neuro style rather than cut-up breaks and are full and weighty. There’s some heavy compression used to make the kick and snare pound and the 174bpm tempo rolls them along nicely. The only slight disappointment with the beats is that many use the same drum hits, and bigger variation in the drum sounds would have been nice. That said, they are all well put together, solid, chunky and bang on genre.

Alongside the loops are four folders of single hits split into bass, drum, effects and synth. The bass and synth multisamples are powerful and dirty, a fair chunk have a vocal quality to them, whilst others are raspy, distorted or percussive. The production is good, as is the synth programming, and it all has that darker, aggressive edge.

Drum hits, like the beat loops, are nice and chunky. There’s a nice range of percussion and hi-hats, but the kicks and snares do seem a touch too samey. The small selection of effects are nicely put together and include impacts, drops and risers. These are very tasty and I’d like to have seen some more.

The only real complaint I have about this collection is that its palette of sounds, whilst on the whole great, is perhaps slightly too narrow. Yes, it sits squarely in the neuro sub-genre, as the name suggests, but where the boundaries are slightly widened, in the music loops for example, it really stands out and I would have liked to have seen that carried through to all the sections. That said, this is a very good collection of darkly aggressive (there’s that word again) loops and samples that would easily slip into the darker, dirtier side of electronic production, whether that be Complextro, Grime, Dubstep or EDM. Oli Bell