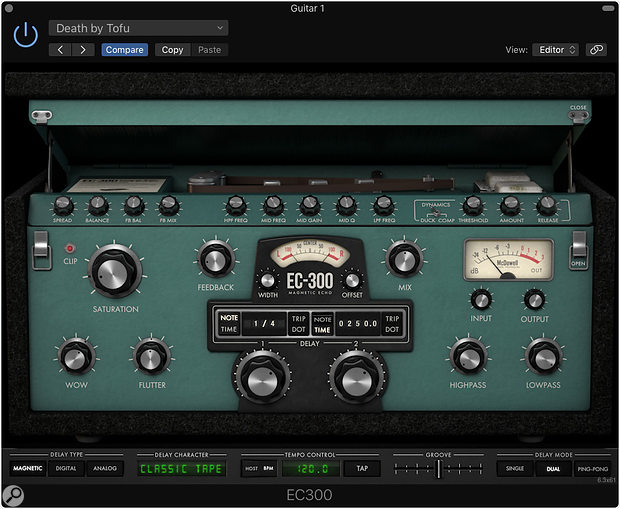 The GUI for the Magnetic mode looks for all the world like an antique tape echo.

McDSP’s tasty echo presents a mouth-watering trio of vintage delay styles, with a side order of freakiness.

McDSP’s EC300 Delay covers a lot of ground. Not only does it emulate the three main types of hardware delay unit, referred to here as Magnetic, Analog and Digital, but it also adds various sub-types in each category, along with appropriate modulation for each delay type, comprehensive filtering, and a choice of bit resolutions for the digital algorithms. It also features a library of over 70 impulse responses from loudspeakers and other transducers, borrowed from McDSP’s FutzBox plug-in, which can be applied to the delays. All the usual plug-in formats are supported, as well as AAX DSP and Venue S6L and S3L consoles, and EC300 is authorised using the iLok system. At present, EC300 is Mac-only, though Windows support is promised soon.

EC300 hosts two separate delay lines, which can be configured in single, parallel or ping-pong modes. Single mode provides just one delay control, producing the kind of delays you might expect from a single-head tape echo, while dual mode provides separate controls for the two delay lines, which by default are panned hard left and right. In ping-pong mode, delay one feeds into delay two.

Each of the three EC300 delay types has its own distinctive user interface, and all three types include a choice of delay ducking or compression plus overall high- and low-cut EQ that affects all the delayed signal. The Magnetic and Digital types also feature variable saturation and additional EQ within the feedback path. Delay time can be freely adjustable, sync’ed to host tempo with a choice of note values (including dotted and triplet notes) or tapped in manually. You can add variable swing and a time offset between the two delays. A closable ‘lid’ hides all the more advanced controls, leaving you with just the essentials, and a common ‘always visible’ strip at the bottom of the screen is used for selecting the delay type, delay character, tempo options, groove amount and single/dual/ping-pong delay mode.

The GUI for the Magnetic mode looks for all the world like an antique tape echo, and though most of the controls are self-explanatory, the Dual Delay Adjust Controls merit further explanation. Spread uses phase manipulation to emphasise stereo width between the left and right delay outputs, while Balance adjusts the relative levels of Delay one and Delay two. FB Bal adjusts the relative amounts of feedback applied to delays one and two, while FB Mix adjusts how much of one delay’s output is fed into the feedback path of the other to add rhythmic complexity to the repeats. In single-delay mode, any non-applicable controls are hidden. Delay Character allows five different styles of delay to be selected, from warm to slightly bright and dirty, with one option appearing to replicate cassette tape.

A three-band EQ with a fully parametric mid and adjustable high and low frequency bands affects the signal as it recirculates around the feedback path, while the wet/dry Mix and Feedback controls do much as expected, with the caveat that the feedback amount can go well beyond 100 percent to compensate for any level lost in the feedback loop through EQ or saturation. Width adjusts the panning of the Delay 1 and Delay 2 outputs, with values of over 100 percent creating an extra wide image.

On top of the raw delay setting, Offset allows an additional timing difference to be applied between delay one and two to add complexity. Separate modulation controls synthesize wow and flutter to add tape-like warmth and richness, while a Saturation control simulates overdriving the input. The dynamics section can be set for delay ducking or compression, with variable threshold, amount and release time; clicking the output VU meter switches it to showing the amount of gain reduction taking place.

The Analog delay GUI has a quite different visual feel to it. This time, a Character menu accesses five different styles of ‘bucket brigade’ delay emulation, including one with resonant repeats. There’s no EQ other than the main high and low filters, and the modulation is replaced by a more conventional LFO-based system with a choice of waveforms. The dynamics section is the same as in Magnetic mode. 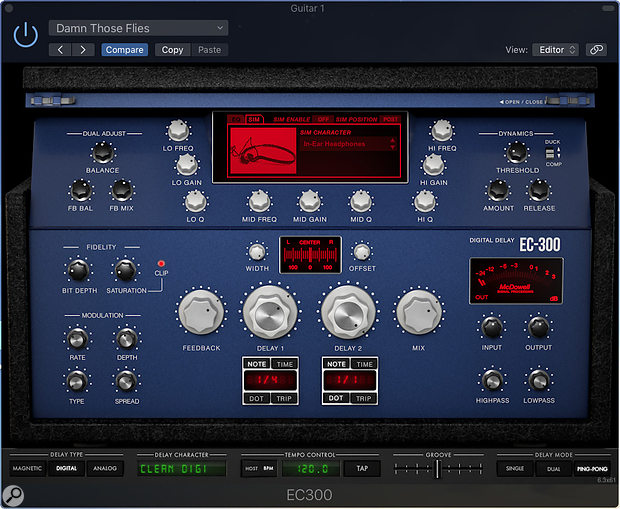 In Digital mode, the EQ section can be replaced with one of a library of impulse responses.

Things start to get really interesting in Digital mode, where the feedback-path EQ becomes a fully parametric three-band affair with a choice of ‘EQ characters’, complete with graphical curve adjustment and visualisation. The Lo/Hi Res EQ option uses the high-pass and low-pass resonant filters from McDSP’s Filterbank F202 plug-in. Controls familiar from the other modes are joined by adjustable bit depth and saturation, and you get the choice of using one of the Synthetic Impulse Response (SIM) options instead of the EQ section in the feedback path. The EQ Position can also be switched to come after the delay.

Most of the SIM settings replicate different types of loudspeaker, many of which are small, lo-fi devices or even earbuds. There’s also a dustbin, a watercooler bottle, a plastic pipe and even a vacuum cleaner hose, all of which colour the repeats in interesting ways, giving a useful choice of textures that still manage to sound musical.

The Power Of Three

Tape mode offers nominally clean but musical delays that sit nicely behind the dry sound without seeming to compete with it too much. I found that the Saturation control added quite a lot of dirt at anything other than the lowest settings, but if you use it sparingly, it can enhance the character without becoming too obvious. Having EQ in the feedback path makes it easy to set up delays that drift into the distance, or become thin and squawky, as the repeats die away, while the Wow and Flutter controls add a nice touch of authenticity to the proceedings. Having a ducking or compression option for the delays is also useful: ducking, in particular, allows the delay level to swell up during pauses in the dry signal. 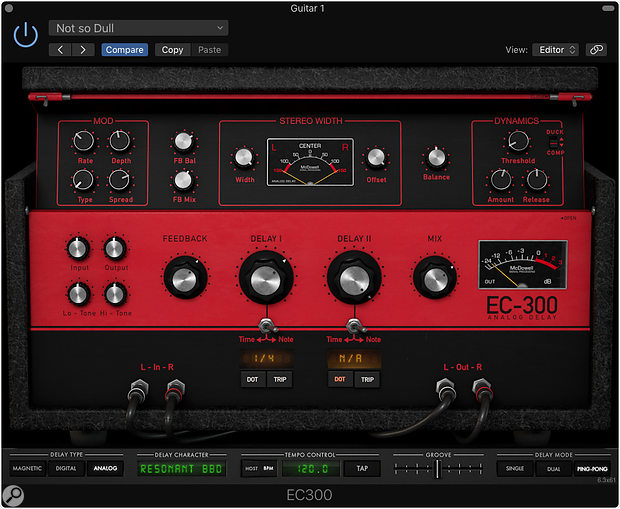 Analog mode came as something of a surprise, as many of the bucket-brigade emulations I’ve heard simply present you with a dull delay that doesn’t quite capture the character of a real charge-coupled delay-line. I think the McDSP engineers have done an excellent job here, as all the warmth and complexity of the real thing comes across very nicely, especially when high levels of feedback are in use. Happily you don’t get the background noise that came as part of the baggage with some of the early originals! There’s something of an Electro-Harmonix flavour to some of the settings, especially when you use the Resonant variant or add subtle modulation.

Digital mode also offers some surprises, with some seriously lo-fi possibilities alongside the expected clean and clinical delays. Having both saturation and bit-depth reduction available means you create some wonderfully noxious sounds too — if you add modulation and saturation to a 4-bit delay, you can conjure up the sound of a swarm of flies accompanying you. Not only that, but switching to the SIM mode gives you access to EC300’s big library of impulse responses, most of which produce a character that simple EQ can’t replicate. I particularly like the fax-machine speaker option, which gives a nicely focused delay sound that sits well behind guitar, and I would have liked to see a few more ‘brave’ additions to the IR library or the ability to import your own IRs.

The ability to combine modulation with very short delay times means that EC300 can also generate pretty convincing mild flanging and rich chorus effects — note that there’s interaction between the processing in the feedback loop and the feedback control itself that varies between the three delay types, so if you set up a stable repeating delay in Magnetic mode, you might find that this builds up into runaway feedback if you switch to Analog mode! The one feature the EC300 doesn’t have is the ability to set up multi-head delay emulations beyond its two delay lines, to mimic devices like the Roland Space Echo or Watkins Copicat, but I can’t say I really missed it.

As with any plug-in as comprehensive as this one, experimentation pays dividends, and regardless of what you want from a delay, EC300 pretty much has it covered and then some. While there are many other very capable delays from which to choose, few are so versatile and none that I know of use impulse responses to create different delay characters.

EC300 does pretty much everything you’d want in a vintage delay emulation, and does it very well.