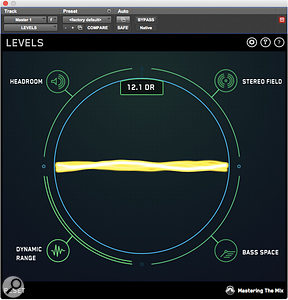 Most right-thinking people now agree that the ‘loudness wars’ of the ’90s and ’00s were a Bad Thing, and that the subsequent shift towards loudness-normalised playback has been a major turn for the better. However, what the old peak-normalised regime did have in its favour was simplicity. If you were doing home mastering for CD, you simply cranked up the output limiter to the point where you started to find the side-effects unacceptable. Today, there’s a bewildering variety of streaming formats to cater for, each applying its own set of rules, which often aren’t made public. In a world where louder is no longer automatically better, how do we avoid pitfalls at the mastering stage?

Two things are paramount when mastering for a loudness-normalised environment. One is getting the dynamic range of your mix into the right ballpark. The other is ensuring that your mix not only does not hit 0dBFS, but that it does not contain inter-sample peaks that will introduce distortion in data-compression codecs. There are now numerous metering plug-ins that can tell you whether your mix meets these criteria, but they are often seriously pricey, and some are not exactly intuitive in use.

Levels from Mastering The Mix is a refreshing alternative, presenting the metering tools that are needed in today’s loudness-normalised world in an affordable, easy-to-use package. Its friendly graphical interface can be switched to display one of four different visualisations of your music. Perhaps the most important of these is the default Headroom view, which shows the all-important integrated and short-term LUFS readings alongside an oversampling true peak meter. A related view is the Dynamic Range meter, which displays the peak-to-loudness ratio or ‘crest factor’ of a signal, and helpfully changes colour to indicate when you’re in danger of eradicating too much dynamic range from your music. 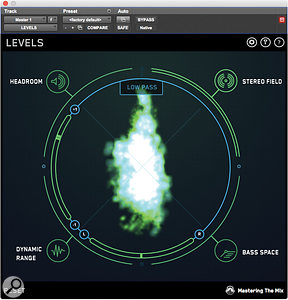 Get these readings in the right zone, especially the last of them, and you can be confident that no nasty surprises will await when your music is streamed from YouTube or Spotify, but there’s more. The Stereo Field page provides simple but effective vectorscope and correlation meters, with the option to focus only on what’s going on below 300Hz, while Bass Space is a dedicated four-band spectrum analyser targeting 40, 80, 120 and 160 Hz, to let you identify and eradicate unwanted subsonic noise.

Mastering The Mix have deliberately omitted some of the bells and whistles you’d find in a ‘high-end’ metering plug-in, but I think that for the intended market, that’s exactly the right decision. Unless you know exactly what you’re doing, the ability to choose different measurement standards or reconfigure the operation of the metering algorithms is likely to introduce confusion and doubt without noticeable benefits. Levels is not intended to be the be-all and end-all of metering, but provides a simple, effective and very user-friendly set of tools precisely tailored to address the most important issues in music mastering today. The difference it could make to your music is probably a lot greater than the difference the asking price will make to your bank balance!