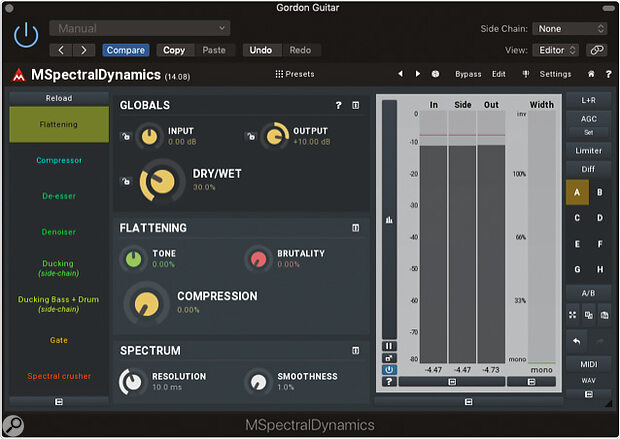 Melda Productions MSpectralDynamics is a spectacularly useful plug‑in that uses spectral processing in a number of ways, both curative and creative, from evening out the spectral content of a sound, through applying noise reduction to spectral crushing. For those looking for something cheaper and simpler to use, MSpectralDynamicsLE is based on the same engine as MSpectralDynamics and comes with the same factory presets and top‑level controls. Indeed the same download is used for both the full and LE versions, with the LE unlock code simply hiding the deeper Edit section of the full version. All the common plug‑in formats are supported on Mac OS and Windows, and because the authorisation is via a personal code that identifies the user, the plug‑in can be installed on multiple machines belonging to that user.

Eight operating‑mode selection panels are shown to the left with the main controls to the right. When a mode is selected the control layout changes appropriate to that mode. To the right of those is the metering section and at the top of the control panel is the Global section, which not only looks after input, output levels and wet/dry balance but also sprouts some additional knobs depending on the mode. In Compressor mode, for example, there are controls for the amount of compression and tone. Below are other controls specific to the current mode and, at the bottom, the two Spectrum controls for adjusting the resolution and smoothness of the spectral processing.

Though the eight modes might suggest conventional processing, MSpectralDynamicsLE applies processing separately to each frequency in the spectrum, which opens up a lot of useful possibilities. Flattening mode evens out the spectral content of the material and can work well on both individual tracks and whole mixes or submixes. In Compressor mode the process is similar, but only loud frequencies are affected. I have found both these modes to be extremely useful in controlling the boom or boxiness of acoustic guitars, for example.

I was impressed by how natural this form of ducking can sound...

In the ducking mode, a side‑chain signal controls the ducking process in such a way that only conflicting frequencies are ducked, making the process sound far less obtrusive than conventional ducking. Using vocals and guitar as an example, it is possible to help the vocal rise above a guitar without the guitar sounding noticeably quieter. Another very common conflict arises with bass instruments and kick drums so there’s a special side‑chain mode for dealing with that situation. I was impressed by how natural this form of ducking can sound.

The De‑esser targets only those frequencies that need taming, and the user can set the general frequency of the problem area as well as adjusting other familiar parameters. It may be adjusted in a similar way to a standard de‑esser but it sounds much more transparent. Denoiser works in the same way as many other spectral denoisers, suppressing frequencies that fall below the threshold, but it lacks the ‘learn’ capability of dedicated solutions. As long as you don’t try to reduce the noise by too great a degree, it can be quite effective — but push it too hard and you’ll get that familiar watery warble.

Both Spectral Gate and Spectral Crusher can be coaxed into producing vocoder‑like filter sounds, making for easy but effective sound design, again with just a small number of controls to tweak. The Edit mode of the full‑fat version shows useful graphics and also gives you more parameter adjustment, but you’re not missing out by starting with LE, as there is an upgrade path. One feature I did miss from the full version was the frequency display with a draggable threshold superimposed upon it. But given its affordability and library of tweakable presets, you could get a lot of mileage out of this LE version before feeling the need to upgrade.