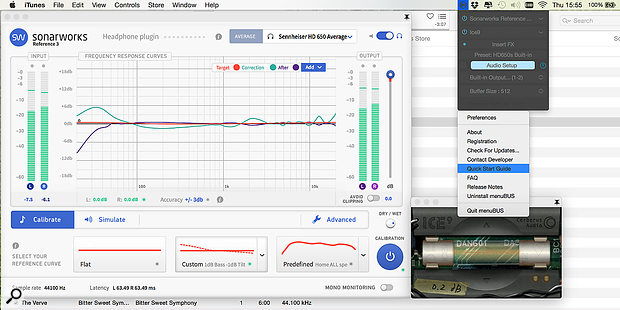 MenuBUS is a very neat execution of a simple idea. Essentially, it’s a virtual soundcard which is inserted between your various Mac OS apps and your physical audio interface, and can host AU-format plug-ins. When loaded, it sits discreetly in your Mac’s menu bar. Click on its little waveform-in-a-circle icon and you can click a slot to add a plug-in, and can select your preferred output device. And at heart, it’s that simple. The obvious possibilities include running speaker or headphone correction software, such as Sonarworks Reference 3, but you can also use it to host various metering/analysis plug-ins. Having experimented with a few unstable beta plug-ins of late, I’ve also found it useful to host Cerberus Audio’s ICE9 plug-in, which mutes the audio in the event of a rogue plug-in spewing out full-scale digital noise (not a pleasant experience if you’ve left generous headroom on your mix bus!). There are a few other useful features — your Mac’s speaker volume keys can be used, even if routing MenuBUS to a different audio device (such as my RME Fireface). It’s possible to record a shortcut key to bypass the processing, which is a handy feature. And you can store preset effects chains, complete with the output device, so you can instantly recall settings for different rooms/headphones.

Over the time I’ve been evaluating this, I’ve encountered a couple of minor bugs, but I have to say that the company have proved very responsive, with free updates being issued frequently to add refinements or to address problems encountered with a few specific plug-ins, and they’ve also made historical versions available, so you can access these in the event that you encounter problems with any future updates. Alas, I’ve not yet been able to get my Nugen Audio Visualiser 2 plug-in to work in Yosemite on my MacBook Pro, but it has been running perfectly well on others’ systems, and the developer tells me they’re working to resolve this issue as soon as they can. All in all, then, this is a very useful little gadget and well worth the modest price of admission. Matt Houghton