This Polish company’s debut product, an inductor EQ, could be just the thing to apply a little professional polish to your recordings.

Miad Audio — slightly confusingly labelled as ad (‘muad’) on the hardware itself — are a start–up boutique equipment manufacturer from Poland. At the moment they offer only one product, the LCPQ 4040, which is a very high–quality, four–band, single–channel, parametric equaliser. It features transformer–balanced input and output and passive inductor–capacitor–resistor (LCR) EQ stages, with discrete transistor buffer/gain stages, and a three–year limited warranty.

The DC input accepts a cable from the separate PSU, which can supply power to two LCPQ 4040s. 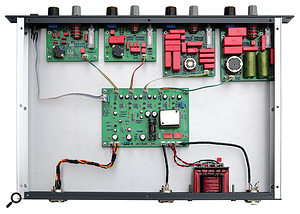 A shot of the LCPQ 4040’s internals, showing lovely Wima capacitors and multitap inductor cores on all four filter modules, mounted behind front-panel knobs. Transistor gain stages and bypass relays are on a central PCB with the input transformer. The output transformer is on the rear panel with a Zobel network across the terminals.As you might expect from a boutique manufacturer, this product is constructed using components from all the top–name manufacturers and it’s built and wired by hand. It features Carnhill line input and output transformers, as well as custom–made five percent tolerance tapped inductors, again made by Carnhill, in all four EQ sections. The rotary frequency–selection switches are from Grayhill, and the section gain controls are (very light–action) Bourns conductive–plastic potentiometers. The passive components include ‘red–brick’ five–percent tolerance Wima polypropylene film capacitors in the filter circuitry, and Panasonic ‘audio–grade’ electrolytic capacitors in the discrete–transistor gain stages. In fact, all of the component tolerances have been kept as tight as possible to ensure good stereo imaging when two units are used together.

DC Power for the LCPQ 4040 is connected via a supplied two–metre, six–pin XLR cable, which conveys ±28V DC for the audio electronics and +24V DC for the bypass relays and indicator lamp. Separate grounds are maintained for the audio and relay supplies, as well as the chassis, right back to a star point in the supplied external linear power unit (PS230). There will inevitably be some people who dislike the use of an external PSU, but taking the mains transformer out of the rack unit is a good idea in this case — it minimises magnetic coupling into the inductors within each EQ band, of course, so it’s a case of audio quality having been prioritised over convenience. That said, the external PSU has some advantages when it comes to convenience and price too — the free–standing PSU brick can cater for two LCPQ 4040s via its two six–pin XLR outputs. The IEC mains inlet has an integral fuse–holder and voltage selector (115/230V AC) and the front panel accommodates an on–off rocker switch and a trio of very bright red LEDs, to indicate the status of the three power rails.

The 1U rackmounting EQ unit’s case is a very nicely finished aluminium affair with a grey, anodised and engraved front panel. It extends about 300mm behind the rack ears and weighs 3kg. The transformer–balanced (floating) line input and output are connected via proper Neutrik XLRs and the controls are well-spaced, with big OKW knobs, with well laid-out and easy–to–read panel markings. Curiously, the knobs all sit about 6mm proud of the front panel, which looks a little odd, as if the control shafts are too long!

Using the LCPQ 4040 is very straightforward, starting with an illuminated push–button on the right–hand side to deselect the bypass relays and switch the unit into operation. Each of the four EQ bands are provided with a grey mode button, a rotary centre–frequency switch (see box), and a rotary gain control providing a sensibly constrained ±12dB range. There is no centre–detent on the gain controls, but each section does have a proper bypass position (Off) on the frequency switch, so the lack of a defined unity–gain point isn’t a major concern. The section mode buttons convert the top and bottom bands between shelf and bell modes, and the two middle bands between normal and high–Q (narrow bandwidth) modes. The specifications do not state the specific bandwidth options, but I estimate the mid–band EQ sections to be about 1.3 octaves (Q=1.1) in standard mode, decreasing to around 0.7 octaves (Q=2) in the Hi–Q mode.

Before getting into the character of the EQ, it’s worth mentioning that with all four EQ bands bypassed individually the audio signal is still routed through the input and output transformers and the transistor gain stages. This allows the LCPQ 4040 to provide some subtle transformer character, if required as a high–quality line preamp stage.

Getting into the EQ itself, the first and over–riding impression is that it is extremely musical and can be adjusted very precisely. There are thirty–four selectable frequencies on offer across the four bands, with the two shelf sections overlapping the mid–sections nicely. In contrast, the two mid–bands don’t tread on each other’s toes too much, maximising the tonal shaping options across the mid–range. Greater precision and control are afforded at the frequency extremes by the option to convert the shelf responses to bells.

In many ways, the LCPQ 4040 feels like a mastering equaliser, purely because of the number and close spacing of the EQ centre frequencies, and although it doesn’t have switchable gain settings the constrained gain range and nice control law allow very precise gain adjustments.

This is very much a ‘shaping’ EQ rather than a ‘surgical’ one; something that works best when gently enhancing musical sources, rather than trying to correct major tonal flaws. At the low end it can deliver weight and bloom very nicely, while the high–end boost is fabulously airy, adding gloss and sheen without any hint of harshness or grit. The mid–range section bandwidths are well chosen to allow an instrument’s character to be subtly but beneficially enhanced or tamed without becoming obvious.

Relatively few modern equalisers employ inductors at all, and the few that do often restrict them to just the low sections, not the high bands, too. To my ears, inductor–based equalisers just sound more natural, and this Miad equaliser certainly confirms that view. All in all, I have to say that I am very impressed with both the engineering and musicality of the LCPQ 4040.

Although multi–band all–inductor equalisers seem relatively rare, I recently reviewed the Ocean Sound Signature Three, which is much less expensive than the Miad but has a similar all–inductor configuration combined with discrete–transistor circuitry. That also delivered a very classy sound. For a similar cost to the Miad there are many other high–quality dual–channel EQ options available, though. For passive EQ with valve electronics, there’s the Summit Audio EQF100, Manley EQP–1A Enhanced Pultec, and Gyraf Audio Gyratec XIV. Moving into discrete–transistor designs, the Great River EQ–2NV and Avalon AD2055 can be considered, and for op–amp–based units, the Bettermaker EQ232P Remote, and API 5500 Stereo EQ (the latter using API’s discrete op–amp stages, of course).

Running a pair of LCPQ 4040s through a set of standard bench tests using an Audio Precision test unit, I measured very similar figures for both units. You can see the results in the plots given below.

To summarise, total harmonic distortion (THD) was around 0.005 percent at +4dBu, and the signal–to-noise ratio was 87dB (unweighted, ref +4dBu). Combined, these gave a THD+N figure of about 0.007 percent or –81dB (unweighted, 22Hz–22kHz). The frequency response reached –3dB at 7Hz and 50kHz when terminated with 600Ω (the HF roll–off extends to nearly 80kHz when connected to a high–impedance destination).

The specifications claim a maximum output level of +21dBu into 600Ω but I found the review unit could achieve +23dBu with a 600Ω termination, delivering only 0.1 percent THD (and 0.3 percent at +24dBu). This result gives a total dynamic range capability of around 109dB (AES17, A-wtd). Both the signal–to–noise ratio and dynamic range figures are around 5dB lower than claimed in the specifications. 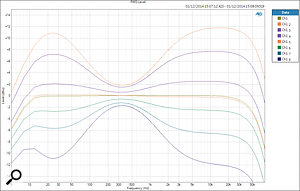 A set of LF and HF shelf responses, plotted across a 5Hz–80kHz bandwidth, illustrating the general character and ranges. 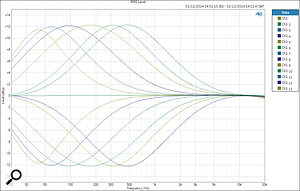 A complete set of LF bell responses at every frequency setting. 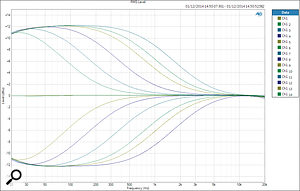 As the previous plot, but for the default shelf mode. 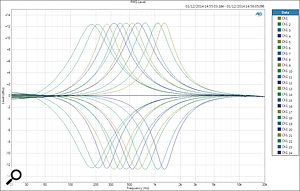 The responses at each frequency option for the LMF band when set to narrow bandwidth (Hi–Q). 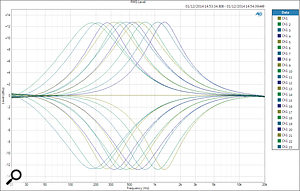 As the previous plot, but for the standard bandwidth mode. 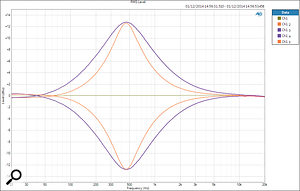 A comparison of the normal and Hi–Q bandwidth settings at a single frequency. 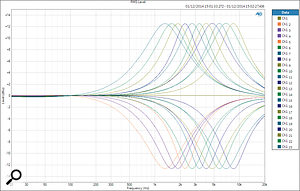 As above, but for the high–mid frequency band in high–Q mode. 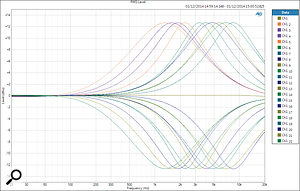 As above but in normal mode. 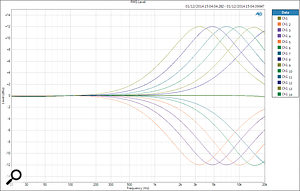 A set of band 4 bell responses. 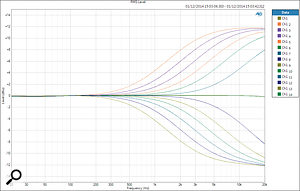 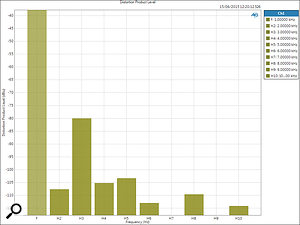 A histogram of the major distortion components at the nominal operating level +4dBu. 3rd harmonic is dominant. 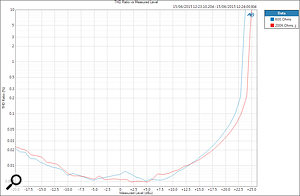 A plot of the distortion amount versus the output level (for 600Ω and high–impedance loads), showing the onset of saturation/clipping.

Running a pair of LCPQ 4040s through a set of standard bench tests using an Audio Precision test unit, I measured very similar figures for both units. Total harmonic distortion was around 0.005 percent at +4dBu, and the signal-to-noise ratio was 87dB (unweighted, ref. +4dBu). Combined, these gave a THD+N figure of about 0.007 percent or –81dB (unweighted, 22Hz–22kHz). The frequency response reached –3dB at 7Hz and 50kHz when terminated with 600Ω (the HF roll–off extends to nearly 80kHz when connected to a high–impedance destination).

The specifications claim a maximum output level of +21dBu into 600Ω, but I found the review unit could achieve +23dBu with a 600Ω termination, delivering only 0.1 percent THD (and 0.3 percent at +24dBu). This result gives a total dynamic range capability of around 109dB (AES17, A-wtd). Both the signal–to–noise ratio and dynamic range figures are around 5dB lower than claimed in the specifications.

If you want more detailed information, you can find plots generated during these tests on the SOS web site.

The switched centre–frequency options for each band are:

A very nicely conceived and built four–band equaliser with passive LCR filtering on each band and copious centre–frequency options. The buffer and gain stages are constructed from discrete transistor circuits, and the audio is transformer coupled in and out.