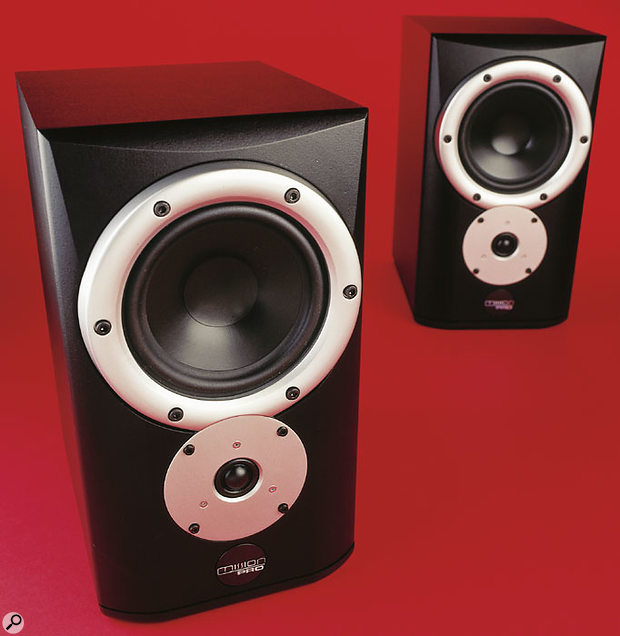 The Pro SM6Ps see a big name in hi-fi moving into the home studio market. So should we choose to accept these Missions? This review will self-destruct in five seconds...

The name of Mission has been well known in British hi-fi circles for around 25 years, but the Pro SM6P is their first foray into studio monitoring. As with other Mission designs, the speakers are built 'upside down' with their tweeter at the bottom, but the Mission badge can be rotated if you prefer to stand the speakers the conventional way up, or even use them on their sides. This degree of configurability is useful as the tweeters should be arranged to be close to head height, or at least directed towards the listener's head, while at the same time kept as far as possible from reflective surfaces, such as mixing consoles and computer desks. Side mounting should be last resort with any monitor, however, as it significantly narrows the 'sweet spot'.

Based on a fairly conventional ported two-way topography, the Pro SM6Ps are passive and have their ports on the rear panel below the chunky, gold-plated binding terminals. MDF is used for the cabinet construction; the front baffle is an immense 38mm thick and the front corners are generously radiused to minimise diffraction effects. Each speaker weighs 8.1kg and the drivers are mounted symmetrically so that both speakers in a pair are identical. The slightly ostentatious trim around the bass/mid driver gives the speakers a rather hi-fi look, but a smart one! Both drivers are magnetically shielded to allow operation close to old-fashioned CRT computer monitors. The 150mm bass driver is driven by a 32mm voice coil and based around a dual-layer cone material known as Paramid, in effect a sandwich of paper pulp and Aramid fibres giving a structure that is hard on the outside and soft on the inside, the idea being to combine stiffness with a good level of self-damping.

The tweeter is a soft-dome device 26mm in diameter and capable of working up to 30kHz. It's driven via a passive second-order crossover built from audiophile-grade capacitors and coils. The cabinets are finished in a scratch-resistant black coating and internally damped using Mission's own fibrous damping material, Acufill. A flared outlet profile has been given to the bass port to minimise turbulence noise and the whole system has been engineered to give smooth dispersion characteristics across the frequency range.

What all this adds up to is a compact speaker system that can operate from 58Hz to 28kHz with a nominally flat response. Its sensitivity is a reasonable 88dB SPL for 2.83 Volts at 1 metre, the maximum SPL is 108dBA peak and the peak power handling is 140 Watts peak or 70 Watts IEC. In practice, this means that using an amplifier rated between 100 and 150 Watts at modest levels should ensure clipping never takes place, and many home studios could get away with half this power. There are louder monitor speakers, but these will provide plenty of level for sensible nearfield listening.

After wheeling out the usual array of test CDs, I connected the Pro SM6Ps to an amplifier rated at 150 Watts per channel and also set up my AVI Bigga-Tron speakers for comparison. Sand-filled metal stands were used for the test. The Bigga-Trons are around twice the cost of the SM6Ps, but as they behave very well in most respects, they make a useful yardstick for passive speakers of this size.

My first impression was of smoothness when compared with some of the more aggressive monitors I've reviewed over the past few months — these are monitors you could work with for long periods without getting fatigued. At moderate listening levels, this smoothness is combined with clarity and a surprising degree of bass extension — kick drums are interpreted with real weight but without that 'one note' character you hear from over-tuned cabinets. Overall, the tonal balance feels right, though the sound becomes a little less well focused at higher SPLs, and in comparison with my AVIs, the impression of being able to hear 'into' the music isn't so strong — the AVIs definitely have the edge on definition. However, the Missions do compare very well with other passive monitors in their price class, and providing they are mounted on solid stands to keep the bass end tight, they are capable of excellent results. My own view is that they are best suited to the smaller studio where nearfield monitors would normally be used but where a 'grown up' degree of bass extension is preferred.

As we emphasise on so many occasions, loudspeaker design always has to be a compromise, price being one of the more obvious variables. In the Pro SM6Ps, Mission have managed to build an attractively priced passive monitor using decent components and voiced to be as neutral and honest as possible. The compromise is that the sonic integrity suffers a little at high SPLs, but at typical nearfield monitoring levels, there should be no problem. The bass is smooth and even, though perhaps not quite as well defined as you might expect with a more expensive monitor, while the use of a high-quality, soft-domed tweeter means that you get plenty of high-end extension without the speakers sounding brash.

When it comes down to the wire, what really matters is that mixes balanced to sound good on your monitors should also sound right played on other systems, and from my experience with the Pro SM6Ps so far, they should measure up pretty well in this respect. Some users may also be appreciative of the fact that the Pro SM6Ps look more like hi-fi speakers than studio monitors, especially where the same speakers have to be used for mixing and domestic listening.

The Mission Pro SM6Ps offer comfortable and tonally neutral monitoring with a useful degree of bass extension in a compact, visually attractive package.