The KRP1 Krautrock Phaser is a modern recreation of a German classic. 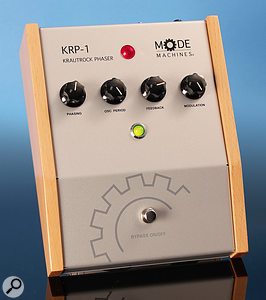 Many of the sound effects that we now take for granted actually appeared as recently as the 1970s. The chorus ensemble was the first of these, and was soon followed by the phaser; most notably by the Roland Phase 5 and MXR Phase 100 in 1974, and the Electro‑Harmonix Small Stone the following year. Nonetheless, there appear to have been a handful of earlier, more experimental phasers, and the country in which their sonic boundaries were most likely to be pushed to the limit was Germany, the home of electronic music. German bands were often more interested in processing sounds than they were in playing dozens of notes in the shortest possible time, and pre‑eminent among these was Tangerine Dream, whose trademark 'whoosh' was created by playing a Mellotron through a hand‑built German phaser called the Gert Schulte Audio Elektronik Compact Phasing 'A'. You can't overestimate the importance of this unit, and some people have suggested that it was as important as the band's keyboards and synthesizers. Shortly thereafter, Kraftwerk adopted the 'A', while in the plank‑spanking world it was used by none other than Richie Blackmore of Deep Purple, so it was surely only a matter of time before a clone would emerge. It has taken nearly four decades for it to do so but, finally, here it is: the KRP1 'Krautrock' Phaser.

The first thing I noticed about the KRP1 is that it's heavy. Despite being hand‑made (which I think is sometimes a mixed blessing), it feels robust, and while one would have to be brave or foolish to take an original Compact Phasing 'A' on the road today, I would have no hesitation in bolting a KRP1 to a pedalboard and shoving it in the back of a van. Unfortunately, I was less happy when I found its wall‑wart, because I had expected an integrated power supply. Another thing I should point out is that the wooden end‑cheeks shown in the photographs are optional extras and cost an additional £20$30.

Setting up the KRP1 was, of course, trivial. Plug in a mono source, one or both outputs, plus the DC supply, and you're ready to go. Happily, the input is not an exact clone of the A's, because it has been tweaked to accept a wider range of signal levels, resulting in cleaner and brighter results from low‑level instruments such as guitars and Pianets.

As you can see, there are just four knobs. The first three of these are easily understood; they control the width of the sweep, the period of the sweep, and the depth of the notches, while the large lamp on the panel gives you an immediate indication of the sweep rate and your position within it. However, obtaining a specific effect is less than straightforward, in large part because even the manufacturer appears to be unsure what happens when you adjust the fourth knob, labelled Modulation. Some people, including the presenter of Mode Machines' own on‑line demo, have described this as a Mix knob, controlling the relative amplitudes of the dry and wet signals in stereo use, but simple tests demonstrate that this is not the case. It sounds as if it is applying a slight phase shift or detune between the channels, although the effects that you can obtain from it — which include mild pseudo‑stereo panning — can depend upon the positions of the other controls.

On the back of the unit, you'll find two control inputs and a switch. In principle, their operations are self‑evident. The first allows you to control the amount of phasing using a foot (volume) pedal, while the second allows you to control the rate using a second. The switch, labelled Auto/Manual, suggests that you can bypass the phasing depth and rate controls and treat the KRP1 as a sophisticated wah pedal, but that's not quite correct, because there are still interactions between the top panel knobs and any values determined by the pedals. By the way, the fledgling documentation did not mention this, but I found that I needed to use pedals with TRS jack plugs for everything to work. When did phasing become so complex? 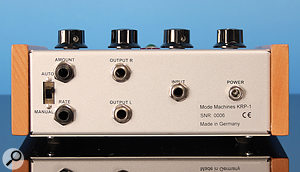 The KRP1's rear panel, featuring footpedal inputs for amount and rate, two quarter‑inch outputs, a single quarter‑inch input and a socket for the external PSU.

Given its background, I thought that it would be interesting to compare the KRP1 with two vintage phasers, an original Small Stone and a Roland Phase Five. Despite the fact that all these units operate on the same principles, the sonic differences between them are immense, although, when you consider the unusual architecture of the KRP1, this maybe isn't as surprising as it first appears.

Experimenting with the KRP1's stereo output channels (the EH and the Roland are strictly monophonic), I patched it through a mixer to two sets of speakers: a wide, stereo pair of active monitors, and a stage combo with stereo inputs but just a single speaker enclosure. I found that the sound of the Left channel was often — although not always — different from that of the Right, which in turn could be different from L+R played in stereo, which was again different from L+R mixed to mono. While these differences were often subtle, sometimes they were not, and I found that they greatly extended the range of effects available.

In use, it soon became apparent that the KRP1 has a wider frequency response than either of the other phasers, resulting in a cleaner, brighter sound. Harder to describe, the KRP1 also has a distinctive character that is quite unlike the EH and the Roland. This is particularly apparent when applying deep sweeps to harmonically rich sounds, and you can hear why musicians in the 1970s used the Compact Phasing A with their Mellotrons' strings and vocal tapes, as well as with the string synths of the era. What's more, the KRP1 is capable of producing the 'clipped' sweep of the Compact Phasing A, where the notches are so high up the spectrum at the top of the sweep that the phasing effect appears to pause at the top, then rush down, sweep up, pause and continue again. It's very distinctive, and Tangerine Dream fans will recognise it instantly. I suspect that, when Tangerine Dream first passed their Mellotron's '3 Violins' through an 'A', it would have been almost impossible to avoid composing Phaedra.

The KRP1's other great strength lies in the range of subtle effects that conjure sparkle and je ne sais quoi for instruments such as guitars, Clavinets, Rhodes pianos and Pianets. Used sympathetically, it adds fairy dust with a delicacy that other phasers cannot.

Inevitably, not all is hunky‑dory, and I found that you have to be careful when using the KRP1 because, while it looks like a new piece of kit, it retains many of the foibles of the original. As well as the oddities of the Modulation knob and the foot pedals, the feedback loop is not constrained to gains below which self‑oscillation occurs, so beware ear‑shredding screams if you're not circumspect in its use. You also have to be careful to avoid distortion with some signals and, although the unit is not overly hissy, it was prone to generating hum when connected directly to my active monitors. What's more, the affected signal was often significantly louder than the input, and whereas the original Compact Phasing A could fade its effect in (or out) when you switched it on (or off), the KRP1 does not; the stomp button is a hard bypass so you get a significant discontinuity when you jump from the unaffected to the affected sound (or vice‑versa). Finally, the external PSU started to buzz after a few hours operation. I hope that this is just a one‑off fault with the supplied unit, but it's worth noting nonetheless.

For some reason, I had approached the Krautrock phaser with a certain degree of disinterest. I was also sceptical that, in a world replete with usable phasers costing less than £100$200, a clone of a long‑defunct and little-known unit could justify anything like a price of £399$589. Then it took me much longer to get to grips with it than I had expected.

So here goes... I admit it, I was wrong. While not perfect, the KRP1 sounds great and — whether you're using it to create deep, whooshing sweeps or add delicate sparkle to signals — it works beautifully with both guitars and keyboards. It's not cheap, and there are other high-quality phasers available, but this is one of those rare cases where the idiosyncrasies of the product add to its character rather than detract from its usability. It's not for everyone, admittedly, but if you're in a Tangerine Dream tribute band, you have to buy one of these. If you're not, you're still going to be tempted.

In principle, any phaser is an alternative to the KRP1; a vintage phaser even more so. But its most significant competition lies in the form of the thoroughly contemporary Moogerfooger MF103 12‑stage phaser. This is a much more flexible device, since it offers two phasing modes (six‑stage for three notches, and 12‑stage for six notches), a wider range of sweep rates, overdrive, level matching between the input and affected signals, and CV control over all four main parameters: Rate, Amount, Sweep and Resonance. So why would anyone look at the simpler and less flexible KRP1? The answer is, of course, because they sound different.

The History Of The KRP1

The KRP1 is the brainchild of a German engineer, Jurgen Haible, whose recreations of interesting analogue processors and synthesizers are highly respected among synth enthusiasts.

He first cloned the Compact Phasing A in 1999. The development had been financed by MAM (Music & More), whose co‑owner Michael Thorpe had approached him to discuss the possibility of manufacturing the finished unit as a MAM product. But MAM were in financial difficulties, and although Thorpe demonstrated the KRP1 prototype at the NAMM show in 2000, the project was shelved.

In 2007, Haible began selling the clone as a DIY kit, but in 2009 he and Thorpe decided that there was room in the market for both the kit and the finished product. Unable to decide whether to reinvent MAM or use Thorpe's TBS (Touched By Sound) brand, they chose instead to create a new brand, Mode Machines, which now carries the KRP1, the Xoxbox (apparently pronounced 'socks box') clone of the Roland TB303, and the SL1 Synthlab analogue monosynth.

I asked Mode Machines' Michael Thorpe what the Modulation knob does, and he told me, "We came to the conclusion that it does not have a fixed function. It seems to work in combination with the knobs next to it, and its effect also seems to depend on what frequencies are present in the input signal. We discovered this problem years ago when we first thought about cloning the Compact Phasing A, because we couldn't tell what the function was. But comparing the KRP1 to the original units, we are sure that we have cloned it correctly. I think that Gerd Schulte didn't know what he was trying to make in the early days! Perhaps we had better call it the 'Secret Knob' from now on.”

There are lots of cheap, not very nice phasers on the market, plus a tiny handful that are nicer and more expensive, but very few set your ears a‑tingling. Although the KRP1 is possibly the most costly of them all, it can sound superb and it has bags of character. If you're looking for effects with a bit more polish than the norm, you have to try it.