Mackie's Blackjack is the smallest interface yet to feature their acclaimed Onyx mic preamps. 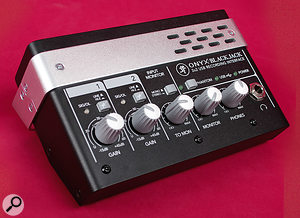 The Mackie Onyx Blackjack is a combined USB audio interface and monitor-level controller aimed at those who only need to record one or two inputs at a time, but who want the preamp and digital conversion quality of Mackie's larger Onyx interfaces and mixers.

The unit is designed for desktop use, and Mackie's designers have clearly gone for simplicity, quality and very robust packaging. The folded‑steel case has a built‑in rear leg so that it sits at a sensible angle on the desk, and all the connections are kept at the back, out of the way.

The Blackjack works with both Mac and PC computers and is compatible with all the major DAW software, other than those software products tied to the manufacturer's own hardware. While the Blackjack is class compliant and will work without the need for drivers, PC users running Windows are advised to download and install the latest ASIO driver from www.mackie.com/products/onyxblackjack for the best performance.

The Blackjack comes with a bundled copy of Mackie's Tracktion 3 software, which provides a pretty painless way to get into computer recording if you're not already wedded to a particular DAW.

The Blackjack features two Onyx preamps, having mic/line inputs on 'combi' jacks/XLRs, with individual DI switching for using the line jacks as high-impedance inputs, and switchable global phantom power. The monitor outputs are on balanced quarter‑inch jacks, governed by the Monitor level control, and there's a headphone output and accompanying level control on the front panel.

The only thing missing is an S/PDIF digital input; you may not need it very often, but they come in handy for importing DAT tapes or other digital formats. 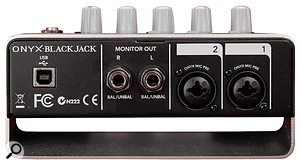 At the rear, we find a USB connection, a pair of monitor outputs on quarter‑inch jacks and the two 'combi' jack/XLR inputs.

The Onyx mic preamps, which have simple metering in the form of a dual‑colour signal/overload LED, are the same as those used in Mackie's Onyx‑series mixers, and our reviews of these products have always included favourable comments about their sound. There is no pad or low‑cut filter on this version but there's plenty of headroom, and impressive signal transparency with up to 60dB of gain. Mackie claim their Onyx preamps rival the most expensive boutique mic preamps for quality. While we probably wouldn't go quite that far, they certainly are impressive.

Conversion is via highly specified Cirrus Logic chips, and power for the circuitry comes from the USB port, so there's no need for a separate PSU. These 24‑bit Cirrus Logic converters are capable of a 114dB dynamic range (A‑weighted), which is way beyond the signal‑to‑noise spec of most studio gear. Importantly, the gain staging within the unit means that the preamp circuitry is correctly matched to the A-D conversion, to maintain headroom while minimising noise and distortion.

An important feature is the Input Monitor knob, which mixes the input signal with the DAW return mix for simple latency‑free 'source' monitoring. This means that you can set larger buffer sizes when recording without suffering that annoying delay in the headphones. Just remember to turn software monitoring off in your DAW to avoid hearing direct and delayed sound at the same time! A Mono button puts the input-monitored signal into both left and right phones and speakers if preferred; otherwise channel one is heard on the left and channel two on the right.

In general, the technical spec is similar to what you'd expect from a Mackie console, except, of course, that the frequency response is dictated to some extent by the sample rate used. You can run the Blackjack at sampling rates of up to 96kHz, and it delivers a 15Hz to 22kHz response accurate to 0.2dB. At 44.1kHz, you still get a 15Hz to 21kHz range. The frequency response of the preamps and other analogue components extends some way beyond this, with the preamps being only 0.2dB down at 50kHz. The converter dynamic range is inevitably greater than the noise floor of the circuitry, but again the circuitry performs pretty much as you'd expect from a Mackie mixer, with a generous input headroom up to +10dB in mic mode and +25dB for the line inputs.

Plugging the Onyx into my Macbook Pro, I launched Logic Pro and immediately found the Blackjack available as a named input source — no drivers, no fuss. As with most mic preamps that use standard potentiometers, the useful mic gain does tend to be bunched into the last one third of the gain control's travel, but that didn't present any problem, as I set the gain for a speech test at a 96kHz sample rate. The playback quality was excellent, so I repeated the test at 44.1kHz. There was a small but discernible difference between high and low sample rates, the higher rates seeming to give a fuller, slightly smoother sound that some might describe as more 'analogue'. The difference is quite subtle, and is in line with what I've heard from other mid‑priced interfaces, so it is down to the individual to decide whether the extra fidelity is worth trading against half your computer's track playback and plug‑in count. I can't really ascribe a specific tonal character to the Onyx preamps — they just sound clean and musical to my ears.

Music playback through the Blackjack was also to a high standard, even at 'normal' sample rates, with a full but well‑controlled low end and smooth, extended highs. The headphone output delivers plenty of clean level, too.

The bottom line is that this simple and very affordable little unit delivers both on sound quality and convenience, in a package that's as robust as you could wish for. I had no problems with USB whining in the background, and unlike some of the lighter plastic interfaces on the market, it didn't fall off the desk as soon as I plugged in a mic cable!

Other than an S/PDIF input, there's really nothing more you could ask for in a basic interface, and while there are cheaper alternatives, once you add in the cost of a monitor controller/headphone amp and take into account both the mechanical and audio quality, the Blackjack starts to look like a real bargain.

There are many similarly sized interfaces available, including the less costly Presonus Inspire (which is Firewire‑based), but nothing I've used yet has matched this combination of a good-quality interface with practical monitoring in such a robust package.

The Blackjack is an irresistible combination of chunky‑but‑compact hardware with exactly the right facilities for basic recording to a high standard.