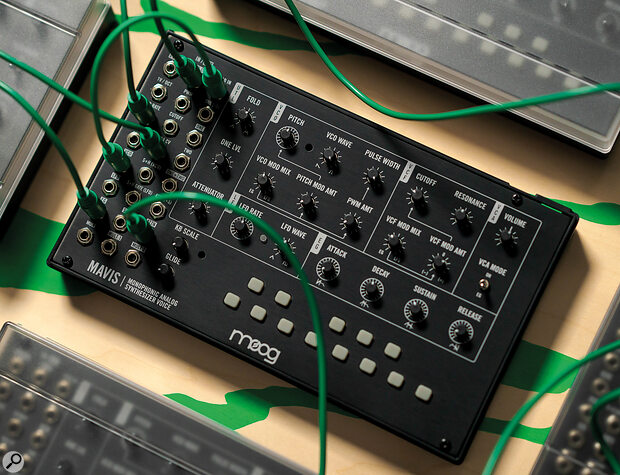 Meet Mavis, Moog’s affordable semi‑modular with more than a few tricks up its sleeve.

Back in 2014 Moog released a small and rather unusual synth called the Werkstatt ø1. Originally conceived as a project for Moogfest 2014’s engineering workshop and never intended for general production, the plucky Werkstatt proved so popular with its makers that it soon found itself on sale to the general public.

Aside from its unconventional development the Werkstatt was unusual in three ways: one, it came as a kit and required assembly; two, it sported a pin‑connector patchbay (with optional 3.5mm breakout board); and three, it was much, much cheaper than Moog synthesizers normally are. Presumably development on the semi‑modular Mother‑32 was well underway by the time the Werkstatt came along, but to everyone outside the company it was the first indication that Moog were considering a new direction. Eight years later it seems a safe assumption that the majority of synths sold by Moog are black, semi‑modular and much cheaper than Moog synths used to be. Moog have moved on, and the plucky Werkstatt which may or may not have inspired this new direction, has moved on too. It returns now, reimagined as the Mavis...

Much like Gandalf The White, the Mavis bears many similarities to its first incarnation, but is generally better, more powerful and enjoys an assured maturity perhaps lacking in the original. This is not the result of a touch‑and‑go battle with the forces of darkness, but more likely because of a more conventional route into production than the Werkstatt and Moog’s subsequent experience in building very tightly engineered semi‑modular synths. Like its predecessor, the Mavis is also a single‑VCO, semi‑modular analogue synth that requires assembly, but it has gained extra patch points, a Utilities section, a wave folder(!), a four‑stage envelope and all sorts of other useful functions. In fact at this stage we’ll stop comparing the Mavis to the Werkstatt (and Gandalf) and concentrate on it as a synth in its own right.

Building your Mavis couldn’t be simpler. There’s no soldering involved and the only tool you’ll need is a small crosshead screwdriver. If you don’t own a crosshead screwdriver you should buy one anyway. They’re brilliant. The whole process is very clearly described in the included quick‑start manual (more on that in a moment), but it basically amounts to screwing the PCB to the front panel, the font panel into the chassis and then screwing on the 24 patch‑point hex nuts with the tool supplied in the box. If you’re planning to Eurorack Mavis (see box), the chassis makes a handy platform to protect the PCB while you screw on the patch nuts.

It’s simple to assemble the Mavis, but it’s also satisfying and fun, and there’s even that familiar tingle of ‘will it catch fire’ you get when you power up any homemade electronic device for the first time. And for the record, no, it didn’t.

To return to the subject of the manual; the Mavis manual is excellent. Just as good as the Moog Sound Studio ones I’ll be banging on about momentarily in the nearby box, and written in a way that makes the Mavis as accessible to the complete beginner as to anyone else. Sadly, though, it’s not included in the box — it’s only available as a PDF from Moog’s website. It is very good, though.

So having built your own synthesizer, sort of, what kind of synthesizer is it? Well, on the face of it, a very simple one. There’s a single VCO, sweepable between saw and square waves, with controls for pitch, pitch modulation, pulse width and pulse‑width amount. There’s also a VCF — of the classic Moog ladder design, naturally — with cutoff, resonance and modulation, an LFO with controls for rate and waveform, and a four‑stage envelope going into a VCA.

Fairly straightforward so far, then, but there are a few small things that stand out as you study it more closely. For example, the modulation for pitch and filter cutoff is sweepable between the envelope generator and LFO, in which space are all sorts of unexpected and unconventional modulations. And the VCF Mod Amount control is bipolar, meaning that when you turn it clockwise from 12 o’clock the cutoff frequency goes up with the modulation and when you turn it anticlockwise it goes down. Simple enough, but it opens up a range of pleasing sound‑shaping possibilities. And then there’s the VCA Mode switch, which when switched on bypasses the envelope and sends a constant signal to the output — good news for drone enthusiasts and generally just very useful.

Beneath all this is a single octave of small rubber keys along with knobs for glide and keyboard scale. The keyboard is fine for triggering notes, but if your plans for the future include knocking out screaming multi‑octave prog solos, you may need to look elsewhere. The keyboard scale knob gives you one octave at its leftmost position, but increases the range as you turn it clockwise to a maximum of five octaves. Obviously this means the actual notes...