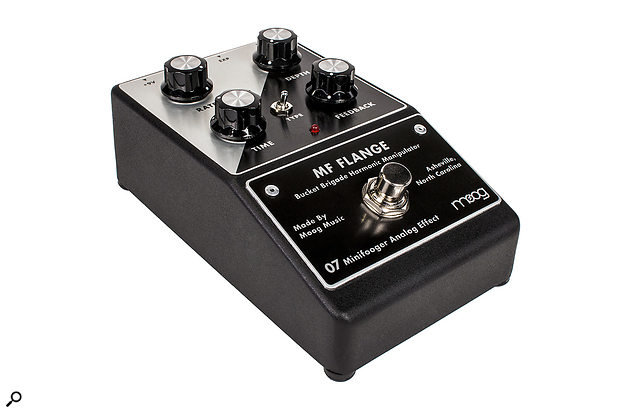 The MF Flange and MF Chorus pedals are the latest in Moog’s Minifooger line, the initial offerings of which we reviewed back in SOS May 2014 (http://sosm.ag/moogminifoogers). These two are based on a type of analogue delay line announced at the end of the 1960s, referred to as ‘bucket brigade’ devices or BBDs. BBD technology differs from that used in digital delays in one key respect: although the audio is sampled in a similar way, using a clock timebase, the result isn’t digitised. Instead, the voltage measured at each sample is passed along a chain of charge-coupled cells: like a long line of people holding buckets, passing water along the chain by pouring it from one bucket to the next. That is, very approximately, the process by which the electrical voltage or charge corresponding to each sample is passed along a line of electronic switches and capacitors in an analogue delay chip. As with real-world buckets, some charge gets ‘spilled’ or ‘leaked’, so the longer the chain, the less accurate and the more noisy the reconstructed waveform at the other end. That’s why analogue delay lines are well-suited to effects like flanging and chorus, where the required delay times are relatively short (although there can a certain amount of characterful charm in longer BBD delay lines too!).

Flanging and chorus are actually very similar processes, in that a modulated, delayed version of a signal is mixed with the dry version in equal amounts, and the main difference between these two pedals is the delay time. The MF Chorus uses a longer delay time (3.2 to 60 ms before modulation) than the MF Flange (around 0.5 to 16 ms before modulation, though it can be as much as 20ms at full modulation). Flangers typically include a feedback control to ‘deepen’ the comb-filtering effect but both these pedals include feedback controls. Their delay times also overlap somewhat, so each is able to stray into the other’s territory to some degree.

Power comes from a 9V centre-negative PSU (not included) or a battery. The battery is accessed by unscrewing the bottom panel; the rubber feet double up as screw-grips, so you don't need a screwdriver. In addition to four knobs, each pedal sports a small toggle switch, as well as a true bypass footswitch. A red LED shows when the pedal is active and pulses at the modulation rate.

The flanger has controls for modulation Rate, modulation Depth, delay Time and Feedback. A Type switch inverts the polarity of the feedback, to create two different timbres of comb filtering, one of which has a very ‘vocal’ quality. An external jack allows the delay time to be controlled by an optional pedal rather than the internal LFO, for tape-style flanging effects. Plugging a TRS jack into the output jack produces a pseudo-stereo output. It’s a neat trick, and an internal switch sets whether the bypassed signal comes out of one or both outputs. In stereo mode, one side gives you dry sound plus delay while the other gives you dry sound minus delay. This can sound very wide through two amps/speakers but you need to be mindful that when recording this effect, summing the two signals to mono will cause the delayed signals to cancel. 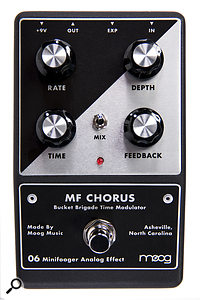 The MF Chorus has the same pseudo-stereo output and control layout as its twin, though the purpose of the toggle switch is a little different, and this time the external pedal input controls the modulation rate rather than the delay time. Offering three switch positions rather than the two of the flanger, the upper switch setting kills the dry sound, to produce a pitch vibrato using only the modulated delay. In the middle position, you get a warm chorus effect, and in the down position a brighter, more lively chorus-like sound. Adding feedback brings in some flange-like coloration.

Many pedals are designed to produce a sensible sound with all the controls set midway, but that’s not the case here — you really must explore the control ranges. The flanger, which can run from thin and whining to sounding like a resonant tunnel, reminded me very much of the first-generation Electro-Harmonix Electric Mistress pedals, but without the excessive hiss. Faster mod rates with less depth can produce a pseudo rotary-speaker effect. Overall, then, this pedal covers all the flanging options you could hope for, especially if you hook up that external pedal for a manual-sweep effect. And turn the delay time to maximum and the feedback to minimum, and you have a chorus effect too.

The Chorus pedal is also very versatile encompassing as it does flanging, vibrato, chorus and even slap-back delay, though the chorus character sounds more warbly than shimmery; you really must be careful with that depth control. To determine why this was, I set the speed slow and the depth high and listened to the pitch modulation in vibrato mode. It seems that the modulation waveform is rather asymmetrical, with a fast attack and a slower decay — a bit like a reverse sawtooth wave — so it’s no wonder the results always sound a little pulse-like. At low modulation depths, the warbling effect is still there but much less noticeable.

In vibrato mode, you get the expected pitch modulation — shorter delay times need to be used to avoid an unwanted delay. Reducing the depth in one of the chorus modes then setting a long delay time produces an almost rockabilly slap-back delay. As you might expect, the more feedback you add, the more resonant things sound, whichever mode you’re in. Using the external pedal to change the speed, it’s again possible to fake basic rotary-speaker effects, this time with the speed ramping between fast and slow.

In summary, then, both of these pedals cover a lot of tonal range and they do so without adding excessive noise — that’s quite an achievement when using BBD chips! Of the two, I preferred the flanger, though the chorus pedal is extremely versatile, falling down only when you want to produce those gentle, shimmery ’80s chorus sounds. For more assertive chorus styles it works very well, and having the range to serve up vibrato, slap-back delay and flanging is great. I loved using external pedal control, especially on the flanger, as it makes it possible to get very close to a random tape-echo vibe.

The pseudo-stereo output from either pedal sounds good played through two amps or a stereo PA system, though do note what I said about the cancellation in mono if you’re planning to record the effect.