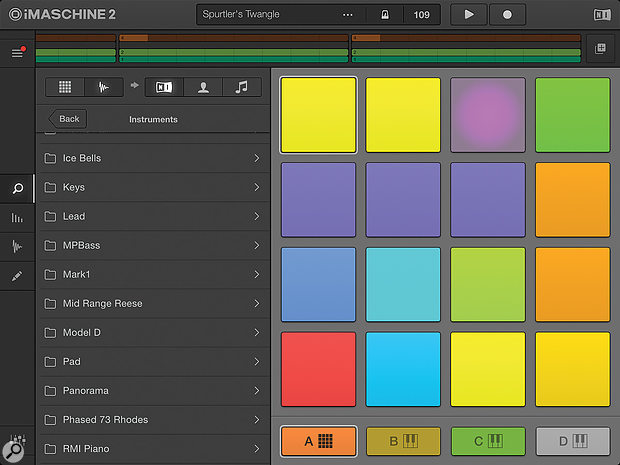 The groups and individual pads of an iMaschine kit can be coloured.

Previously, Native Instruments’ iMaschine was an inexpensive ‘groove sketchpad’, offering a flavour of the full experience for the iOS platform. A little over a year later, iMaschine 2 is here to take the idea a few steps further. The major difference between the versions is that the new one allows the creation of scenes. Scenes are arrangements of patterns in each of the four groups and they can be selected manually or played in succession. While it falls short of a full song mode, the implementation is consistent with Native Instruments’ philosophy on their hardware-fronted Mac/PC versions. Other new functionality includes an arpeggiator, instant chords and scale correction, plus you can colour the pads for ease of identification.

Although there’s no special upgrade path for owners of the first iMaschine, you’ll be relieved to know that existing songs and sounds can be opened in the new version. An internally accessed ‘Expansions Store’ features a healthy list of extra material at 79p99c each, or there’s a bundle deal for purchasing the lot. To get you in the mood for expansion, the free ‘Quantum Collection’ adds urban samples and instruments to the iMaschine 2 library, taking it to a respectable 637MB.

In use, iMaschine 2 is as fast and friendly as its predecessor. Perhaps the only flow-killer is being made to stop for a count-in whenever you start working on a new pattern. As before you’re given four groups, and each can play either a keyboard-based instrument or trigger 16 samples arranged in kit form. Surprisingly, you’re restricted to just four patterns per group, and while each of these can be up to 32 bars long, it doesn’t feel particularly flexible if you’re hell-bent on exceeding the old ‘sketchpad’ concept.

Instead of a manual there are a series of basic tutorials, but there’s very little to confuse or mystify. The swing and metronome settings aren’t immediately obvious but you’ll find them as soon as you reach to adjust the tempo. Everything else is readily accessed via recognisable icons.

The included content is polished and well up to expectations, at least in the percussion department. The rest is mixed, inevitably dance-fixated and consists of a cross section of playable synths, keyboards and basses, plus loops and sound effects of more questionable value. The drum kits are organised by genre and easily personalised by replacing individual samples, colouring the pads and so on. There’s no synthesis to play with (ie. no filter, envelope or LFO), but you can tweak the tuning, gain, pan and sample length of each factory sample — and of your own. 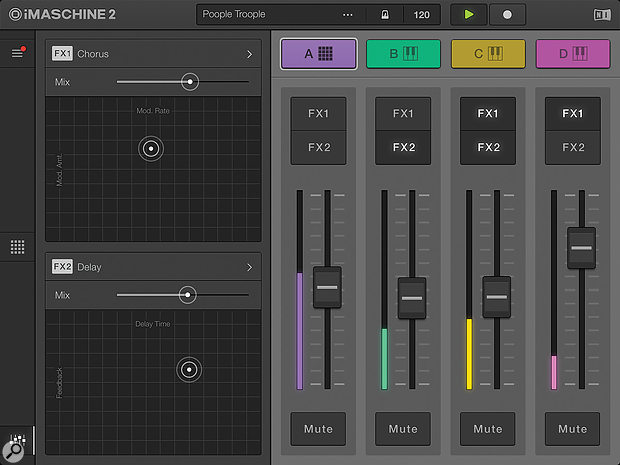 The iMaschine 2 mixer is a simple affair.

Sampling is reduced to its simplest form, but tools are provided to trim the results to the ideal size — or isolate individual hits from those factory loops. Similarly, human beat-boxers and loop-fanciers in general will appreciate the loop-record mode available to any group. It provides an audio loop alternative to the group’s regular pool of patterns, but it’s basic stuff. You can’t edit the loops recorded other than by adding effects in the mixer section. Speaking of which, the four-channel mixer is unchanged from the earlier version, which means it’s a spartan affair (lacking reverb, EQ or automation), but at least it has twin XY pads for effects performance.

When making exploratory recordings, I enjoyed the addition of scales even if, of the 14 supplied, I didn’t immediately recognise ‘Freygish’. (It’s also known as Phrygian). The process is only concerned with the keyboard entry of notes, so notes in existing patterns are not affected when you switch scales. Even so it can be a handy means of spicing up those four-on-the-floor beats with a whiff of the exotic.

The chord mode features a harmoniser and ‘chord set’. The former is a posh name for a series of preset intervals added to the root note, while the latter is a series of instant chords in eight inversions, major and minor. If you select a keyboard-based group, an arpeggiator joins the regular note-repeat options. Arpeggio speed is dictated by the repeat settings and the velocity is similarly extracted from the ‘Live Play’ window. Repeats and arpeggios can be captured into patterns for that classic Maschine vibe, just as you’d hope. Finally, the new step mode provides an alternative to finger-drumming in the form of X0X or TR-style grid entry, and is reserved to tracks with a kit selected.

iMaschine 2 is an attempt to be more than just a sketchpad, and while you can arrange scenes, colour them and lay them out in order, having such a limited pool of patterns makes it a challenge to turn out something substantial. Without reverb, mix automation and a song arranger, it lags some way behind Akai’s MPC Pro for ‘in the box’ completeness. But for quick composition on the move it’s solid and functional — and its output can be exported for further treatment later. Ultimately, it’s a logical and welcome progression for committed users of iMaschine, but probably less of a draw for the rest of us.