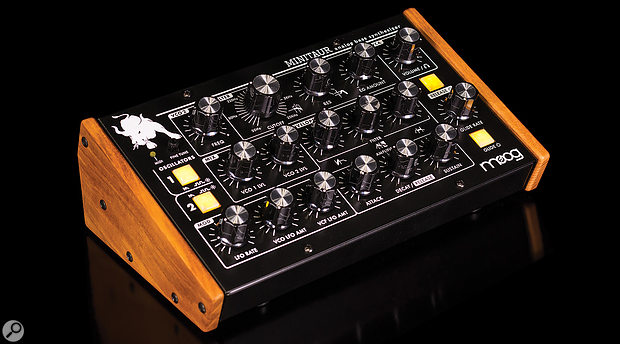 In the 1970s, Moog dominated the market for self-contained, analogue synthesizer bass pedals but, by and large, these fell out of favour following the advent of MIDI. Consequently, it wasn’t until 2010 that the company replaced the original Taurus and short-lived Taurus 2 pedals with the Taurus 3, which seemed to me to be everything that the Taurus was, and more. Then, in a wry twist of fate, the company took the Taurus concept and in 2012... turned it into a small MIDI module.

Like its forebears, the Minitaur had a limited note range and a sound generator focussed on bass, but it wasn’t a Taurus 3 in a box. It offered two VCOs with an unusual synchronisation capability that ensured that phase cancellation never caused the start of any note to sound thin or an octave higher than intended. Then, following its mixer, its VCF was an implementation of Moog’s resonant 24dB/octave low-pass filter that offered velocity sensitivity, as did the VCA that followed it. Unlike the original Taurus pedals, the Minitaur offered two contour generators based upon the Minimoog’s ADS(D) design, whereby the release time was either zero or equal to the decay time. Vibrato and filter cutoff frequency modulation was provided by a single triangle-wave LFO that could be synchronised to MIDI Clock, and three modes of portamento completed the visible part of the package; all of its other parameters could be accessed only using MIDI CCs or the editor that was released shortly after the Minitaur itself. Providing a representation of the front-panel controls on one page and all of the hidden parameters on a second, this made a huge difference to the Minitaur experience, although it was a stand-alone application, which precluded automation within DAWs. Nonetheless, automation could be achieved by recording and replaying the MIDI CCs that the Minitaur spat out every time that you moved or pressed a control. As for the sound, I found that it justified the Taurus name, which was no mean accolade.

Following my review of the Minitaur in 2012, it was soon upgraded to Rev 2 and then to Rev 2.1 and, in retrospect, these probably turned the Minitaur into the instrument that Moog would have liked to have released in the first place. Perhaps most notably, these updates added 100 and then 128 patch memories to the Minitaur, and you could scroll through these using the Glide button as a Shift key together with the VCO1 and VCO2 buttons as up/down keys. It was clunky, but it worked, and making it slicker would have required additional controls and perhaps a screen, which would have turned the Minitaur into a different instrument altogether. Patch selection was much easier using the editor but, unless you already used a computer on stage, this was of no help in live situations.

Rev 2 also separated the decay and release times so that the contours were genuine ADSRs, and Rev 2.1 extended them still further by adding a hold stage between the attack and decay to turn them into five-stage AHDSRs that were streets ahead of the original ADS(D) contours. CV mapping was also added, meaning that three of the four control inputs could now be directed to any two continuous controllers and a switch. This greatly increased the Minitaur’s usefulness when used within a modular setup, and made things far more interesting when using it to treat external audio. Furthermore, since the Minitaur sent a stream of MIDI CCs whenever a parameter value was updated, this meant that you could use it as a three-channel CV-to-MIDI converter, taking analogue control signals from elsewhere and applying them to MIDI instruments, soft synths, and anything else that responded to MIDI CCs. I was also delighted to discover that the Minitaur could now generate (as well as receive) 14-bit MIDI CCs. To put this into context, the Minitaur’s filter cutoff frequency is quantised to approximately semitone steps when swept using 7-bit CCs, whereas the quantisation is finer than one cent using 14-bit CCs.

Other new features included an LFO sync reset function that sync’ed the LFO waveform to MIDI Clock, top-octave wrapping so that you didn’t obtain silence if you accidentally played above the available note range, transposition, alternative tuning scales via SysEx, a drone mode, plus three knob modes — snap to value, pass-through, and relative position — as well as the ability to save and reload the mod wheel position so that modulation amounts could be recalled as part of a patch. Oh yes, and there was also the addition of a Poly Chain mode that allowed you to string together a number of Minitaurs (or other Moog monosynths that support this feature) to create a polysynth. How do you fancy combining seven Sub 37s for leads and chords, plus a Minitaur for bass duties? That would be interesting!

Today, Rev 2.2 develops the Minitaur still further. Moog’s literature says that there are now six modulation sources, but I’m afraid that this is just the marketing department getting carried away. There are two sources — the LFO, which is now capable of generating five waveforms rather than just a triangle wave, plus the filter contour — either one of which can be directed to the VCOs’ pitches and the VCF cutoff frequency. However, you can now disconnect VCO1 from the modulation source so that only VCO2 is affected, allowing you to create chorused sounds that previous versions couldn’t. Alternatively, you can use just a touch of random modulation (ie. pitch drift) to emulate the inconsistencies of the original Taurus pedals to wonderful effect. But the ability to sweep VCO2 independently is most dramatic when you engage the new oscillator sync function; the results can be superb. The final update is a delay stage before the attack of the VCF contour, which turns it into a six-stage DAHDSR.

Getting to grips with the extended voicing using the Minitaur alone is a bit fiddly because, for obvious reasons, all of the new facilities exist as Shift functions. Normally, I would be rather critical of this but, since there’s no other way that Moog could have squeezed the additional parameters on to the existing control panel, we have to accept it. Fortunately, a cheat-sheet illustrates the shifted functions so, having spent a bit of time learning them, I was soon whizzing around the panel, selecting from the new modulation waveforms, extending the range of contour shapes and, in particular, creating all manner of snappy, hard-sync sounds. Interestingly, all Minitaurs can be upgraded to Rev 2.2, which means that the RAM for the patch memories and the code space and processing power for the new functions always existed. I wonder why it has taken five years to implement them? 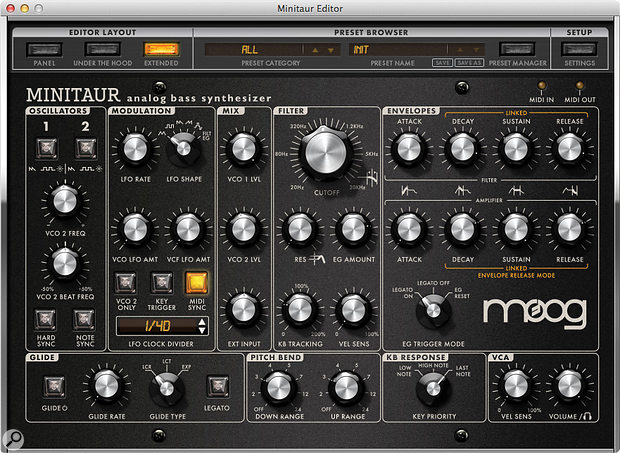 The Minitaur editor has also been significantly updated and now runs within DAWs on both Macs (OS 10.7 and higher) and PCs (Windows 7 and later). Having installed this, it was immediately available when I created an Instrument track within Digital Performer 9 on my MacBook Pro and, when selected, automatically hooked itself up to the Minitaur. The original two pages are still available, but there’s now an Expanded page that lays (almost) the full voicing structure out in front of you. Two further pages provide a comprehensive librarian plus a setup and calibration page that is more extensive than you might imagine. Its ability to provide automation is a big step forward but, even disregarding this, I found it to be a distinct improvement over previous versions, not least because the Extended page makes everything much clearer, although the omission of the delay and hold stages of the contour generators is a surprise, meaning that these parameters can only be programmed from the Minitaur itself. Perhaps a future upgrade will rectify this.

It’s naughty of Moog to advertise that updates such as the on-board presets and the CV mapping with its consequent CV/MIDI conversion are new features in Rev 2.2. I wouldn’t have objected to them reminding us that these have been introduced since the original was released, but to say that they’re new in Rev 2.2 is wrong because... well, they’re not. But overlooking this, there’s no denying that the Minitaur is now a better synth than it was when I first reviewed it. Sure, it’s no longer quite as straightforward as it once was, but that’s the price that has to be paid for shoe-horning so many additional functions into an existing control panel. Whether it can compete against the new breed of miniature analogue synth modules such as the Roland SE-02 isn’t clear, but there’s still something that I rather like about a product that does just one thing, but does it well. Now, if Moog would implement aftertouch so that I could open the filter by leaning harder on a set of MIDI pedals, and would produce a synth-on-a-stick kit so that the Minitaur is as convenient to edit on stage as the Taurus 2... well, that would be really something!

Physically, the Minitaur is unaltered, with a quarter-inch monophonic output, a quarter-inch external signal input and a 3.5mm headphones socket. There are four control inputs: CVs for pitch, volume and filter cutoff frequency, the first two of which can now be reassigned to the continuous controls of your choice, and gate, which is now assignable to the switch of your choice. MIDI connections are provided by USB (in and out) and five-pin DIN (in only). Finally, there’s a socket for the supplied 12V DC wall-wart.

I had one significant reservation about the Minitaur that I reviewed in 2012; it generated a quiet chattering noise when connected to my previous MacBook Pro running on mains power. I hadn’t heard this noise during the current review, but I was using a later generation of Mac, so I dug out the old one and tested it with the current Minitaur. Happily, all was well and there was no unwanted noise.

I’ve been performing with a set of theatre-rattling analogue bass pedals for more than 30 years, and the Minitaur is the one product that makes me wonder whether I should change my setup to include a modern set of MIDI controller pedals and a dedicated bass synth module.