It's perfectly possible to use a tremolo arm to make the pitch of your guitar strings drop in real time, and guitarists have been doing that for years. But this approach presents two problems: first, it requires a hand to control the whammy bar, which means that hand isn't free for other duties; and second, repeated use of the tremolo arm can send your guitar out of tune very quickly. The Morpheus Bomber aims to overcome both problems by presenting the guitarist with a digital pitch‑shift effect that can be controlled by foot. "Nothing new there,” you might think — there have been plenty of stomp boxes, notably the Digitech Whammy range, that pitch-shift in one way or another. The difference is that those either have a very restricted range or create plenty of audible side effects. These may be fine as distinctive effects in their own right, but the more extreme the pitch‑shift, the worse the artifacts become... and that's where the Bomber comes in — because Morpheus claim that the Bomber is almost completely transparent, allowing you to perform drops of up to three full octaves without adversely affecting your guitar sound. 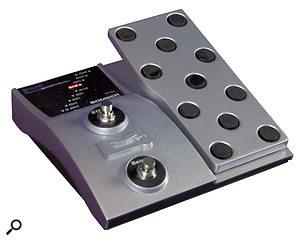 Having long ago given up on expecting products like this to deliver on the promise of the marketing blurb, I was more than pleasantly surprised to find that the claims for the Bomber were justified. Played through this pedal, my guitar felt fast and responsive — there was no noticeable latency at all — and, just as importantly, when inserting the Bomber into my guitar/effects/amp rig, so did the Bomber, which seemed beautifully fluid and sensitive and sounded great. My only issue, in fact, is that this sensitivity makes it hard to set the pedal to any stage between the natural and 'bent' pitches. I'd have liked the ability to, say, set the pedal to switch between three settings rather than smoothly glide from one to another. But that's a small gripe in the scheme of things. Most important is that it sounds great, with good enough resolution that you can do very slow shifts without noticeable artifacts.

It's technically easier to pitch‑shift upwards than downwards, so it's no surprise to find upward shifts included in this pedal — and it can do much more in this respect than you can with a tremolo arm. The upward shifts on offer are (in relation to the source pitch) a second, a fifth, an octave and two octaves; and the drops are a second, a fourth, a fifth, an octave, two octaves, and 'Dive Bomb', which may be three octaves but feels like it goes on for ever!

I also did a few more critical — perhaps less real‑world — tests, just to see what would tease out any audible nasties. When feeding a clean DI and monitoring the signal without further processing (no amp and cab, and no emulations of them or EQ), some unnatural, high‑pitched artifacts seemed quite easy to pick out at times. But for guitarists or bassists these would be well outside the useful range and are easily tamed by your amp and speaker, a speaker emulation of some sort, or even a simple low‑pass filter if you're DI'ing. It could be an issue if you were to try feeding other sources in, though, and I wonder if an on‑board low‑pass filter might be a useful addition.

Varying the playing styles a bit met with correspondingly varying degrees of success, with the Bomber performing much better on sustained notes than on (particularly fast) rhythmic chord playing. In fact, it works very well on sustained notes, but when I tried to play a fast-strummed Smiths tune ('William It Was Really Nothing', which I usually play with a capo on the seventh fret) the Bomber struggled to keep up, and I found the artifacts at these and higher extremes of pitch manipulation rather annoying. As I say, though, this is merely a case of me seeing how far I could push the technology — it's not really what the Bomber is designed to do.

Broadly, speaking, then, I'm pretty darned impressed. I can't think of anything else out there that can do what the Bomber does as well as it does it. Recommended. Matt Houghton