R3FX are a one‑man guitar‑effects outfit based in the US, and they offer a range of pedal mods by mail order, as well as a small number of original designs like this, the Cabinet Simulator. We're used to encountering guitar‑cab simulation as a feature on hardware and software amp modellers, but this decidedly 'boutique' take on the process is something altogether different. A handmade, analogue stomp box (albeit without the 'stomp' switch), it's designed to sit between your guitar and your recording system — or, in a live context, the PA — and simulate the sound of a miked‑up guitar cab. 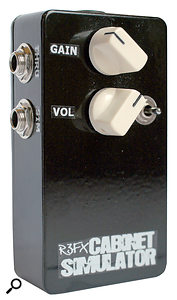 The Cabinet Simulator features gain and volume controls, plus a three‑way voicing switch with settings for 'vintage' (mid-range boost), 'modern' (mid-range cut) and 'blend' (a combination of the two). There's a mono input and output, plus a 'thru' out delivering the unadulterated input signal, and the effect is powered by a 9V DC mains adaptor. The standard version reviewed here is priced at a modest $100 plus shipping (free in the US and $17 everywhere else, though don't forget to factor in tax and import duty), but a number of cost options are available, including the addition of a balanced XLR output (add $25), a dual‑mono version in a larger enclosure (add $50) and a rackmount version with active EQ controls and an XLR out (add $175).

There are a number of different ways to use the Cabinet Simulator. On stage, connecting the thru output to your amp and the simulated out to the PA allows you to use the Cabinet Simulator as a back‑up in case your amp fails, as an alternative to physically miking up the amp or, if you're confident in the monitor mix, as a means to leave that heavy amp at home and just play through the PA. In the studio, you can use it to plug straight into your recording device of choice, but you can also connect it to your guitar amp's effects loop, effectively adding a cabinet‑simulating direct out to any amp with this feature.

So how does the Cabinet Simulator sound? The separate thru and simulated outputs provide a handy way of comparing the signal direct from the guitar with the effected signal, and the difference is considerable. While the thru output delivers just what you'd expect from an electric guitar plugged straight into the desk — a somewhat hollow, spiky sound — the simulated out sounds warmer, fuller and more amp‑like. There's still a DI‑like quality to the sound (you'd be naive to expect this small analogue pedal to conjure up the full sound of a miked‑up amp and cab all on its own), but it's great for recording electric bass. For guitar, you'll probably want to use a preamp‑style pedal in front of the Cabinet Simulator, to further shape the sound and allow a more subtle range of EQ adjustment than the three‑way voicing switch can provide.

I also got good results using the effect‑loop method to record some clean sounds using a Dr Z valve head. Indeed, this is where the Cabinet Simulator seemed most effective, delivering a sound pretty close to that of a close‑miked cab with the convenience of a direct out. What it can't do is mimic the power amp and transformers that it's effectively bypassing, which are an important factor in overdriven classic rock guitar tones. Metal overdrive sounds, which rely more heavily on overdriving the preamp, are achievable using a distortion pedal in front of the Cabinet Simulator, but warmer, lightly compressed drive sounds are harder to recreate. The effect's own gain control is certainly not the answer. It's there primarily as a way to boost a low‑level input, and when it's turned up all the way, so that the Cabinet Simulator itself starts to clip and distort, the results are unpleasant.

These observations are not fatal, however. The Cabinet Simulator represents an attractively priced, simple and surprisingly effective way to capture clean bass and guitar sounds in the studio. Think of it as an upmarket DI for bass, or as a bolt‑on direct out for your guitar amp. It could also be a life‑saver on stage, either when it's not possible to mic up the amp in the normal way, or if it should fail mid‑gig. David Greeves