Last month, we began our explorations into the world of Rhythmic Robot with a look at Beat Room. (Go to /sos/may12/articles/beat_room.htm for more information on RR's instruments.) 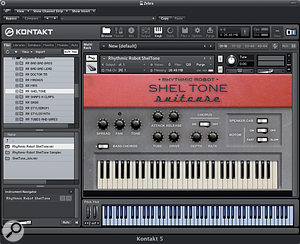 Under review here is Keyboard Vault, which is made up of 24‑bit mono samples and requires a full version of Kontakt (V4.2.3 is recommended). At the time of writing, KV features two simple reed organs, the first of which is the ShelTone, an organ built into a suitcase, with an electric fan that blows air over its reeds. Rhythmic Robot have, of course, sampled the fan separately, so you can have as much or as little of it as you want. This is a warm and appealing little keyboard, its reedy tones and modest attack unashamedly accordion‑like. It thoroughly deserves the description 'organic', but does offer some scope to edge away from the folksy, elbow‑patch vibe too. You can add a little dirt via the tube and drive settings or, for more lush, organ‑y textures, turn on the rotary speaker, which speeds up gradually as you click from slow to fast. With a simple but effective chorus thrown in, the ShelTone is more versatile than it first appears. A quick tweak of its attack and release controls lets you push its repertoire as far as lush and fuzzy pads. This is terrific value.

The second organ is the Magnus, its look and sounds lifted from the Magnus Harmonica Corporation's reed organs of the 1950s. This brown Bakelite box had a teensy two‑octave keyboard and, like the Sheltone, an electric fan. We haven't left accordion territory, but the inclusion of a basic low‑pass filter and tube saturation ("Electrify”) adds extra interest. There's also a simple envelope and a chorus and phaser, both with independent speed controls. The final tonal twist is in the form of samples of a much later model (from the 1970s), and the two organs can be blended using large knobs marked Bakelite and Plastic. The Magnus is all about mushy, muddy sounds that can also get nasty when the saturation is cranked up. Paul Nagle