Need to record several different channels into your computer at the same time? Then you'll need an audio interface with a high channel count! Here's our selection of current options, with links to the SOS review where available.

The Apollo caused quite a stir when it was first announced. Not only is it a high-quality interface with an impressive I/O count, it also incorporates Universal Audio's renowned UAD2 digital signal processing, which includes some of the best software models of classic hardware available. It's available in Duo or Quad versions, which feature two and four DSP chips, respectively.

Apogee are known for the quality of their A-D/D-A conversion, and this Firewire interface is no exception. It also has four digitally controlled mic preamps offering an impressive 75dB of gain. The only down side, other than its relatively high price, is that it's only compatible with Macs, not PCs.

The AudioFire Pre8 is, as its name suggests, a Firewire device. Like many rivals, it has eight mic ins and eight analogue outs, plus 10 channels of digital I/O, but here the first two mic ins boast polarity inversion and switchable impedance, as well as insert points, pads and high-pass filters.

The UR824 has eight mic preamps (two of which also have DI jack sockets), eight line outs and two headphone outputs, as well as two sets of ADAT I/O. It also has built-in DSP mixing and effects, which can all be controlled from within Steinberg's DAW Cubase, without you having to hop back and forth between the DAW and separate control software.

Like the RME, the 828 MkIII can connect to computers via either Firewire or USB. It has better front-panel LED metering than many interfaces, as well as an LCD screen and set of encoders that let you adjust the built-in DSP mixer and effects. Two mic/instrument inputs are present, and there are eight line ins and 10 line outs, plus extensive digital connectivity.

While most audio interfaces have roughly equal numbers of ins and outs, the USB US2000 is aimed at capturing a high number of channels, and mixing them in the computer: it has only four independent outs, but there are eight mic preamps as well as six dedicated line ins, plus a S/PDIF input. Two of the mic inputs have insert points.

The Fireface UFX has both Firewire and USB ports, for maximum compatibility. As well as the rock-solid drivers for which RME are known, it has high-quality converters and preamps and, impressively, can function as a stand-alone multitrack recorder, recording up to 30 channels to an attached USB drive.

Featuring eight of the same Onyx preamps that Mackie use in their mixing desks, the Firewire Blackbird is well built and, importantly, easy to use: in our review, we described the included control software as "a model of clarity”, and praised the direct monitoring arrangements on the first two inputs.

This is Focusrite's current flagship interface. In addition to its six conventional preamps, it has two 'Liquid Channel' inputs, which model classic preamp designs from the likes of Neve, Telefunken and Pultec. It connects to computers via Firewire, and can be expanded via its extensive digital I/O.

For the I/O it offers (eight mic ins, eight line outs plus ADAT and S/PDIF ports), the USB 1818VSL is remarkably affordable, as well as compact. It also includes much of the processing that can be found in PreSonus's StudioLive digital mixers, and the onboard DSP can even be controlled via an iPad app — so you could feasibly use it as a touchscreen-based live mixing console.

This eight-in/eight-out interface connects via Firewire, and can accommodate eight mic inputs, as well as two instrument signals. It also has two independent headphone outs, and a software mixer with flexible routing that can be used to create multiple cue mixes.

This USB device has 10 ins and outs, including eight mic preamps and a stereo S/PDIF in. All the preamps are digitally controlled, and, unusually, they have an 'auto-sens' function, whereby their gains are automatically set to a value appropriate to what you're recording.

There are numerous interfaces around capable of recording several channels at once, but how do you know which one is right for you? 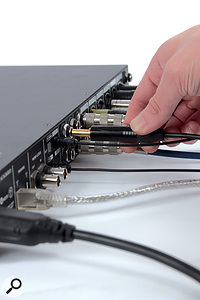 One of the main considerations when buying an interface is whether it has enough inputs and outputs for your purposes.The first thing to consider when deciding which interface to buy is its connection format. Some interfaces use PCI cards, which have to be fitted into a computer, but all those listed above connect either via USB or Firewire, meaning that they simply plug into the relevant socket.

Firewire interfaces can be picky about the Firewire chipset in your computer, with compatibility problems ranging from the occasional crackle to the interface not being recognised by the computer at all! It's definitely worth checking the manufacturer's web site to make sure that your own chipset is compatible. USB is generally more forgiving, and arguably more future-proof, as Firewire ports are rarely fitted as standard to new computers nowadays. In fact, some manufacturers now offer both connection types, enhancing compatibility at the expense of making the interface a little more costly. With the right interface, drivers and computer, decent low-latency performance is possible using both protocols.

It's worth also mentioning Thunderbolt, which is a new connection type that should in theory offer a higher maximum channel count. At present, there aren't many Thunderbolt interfaces around, but honourable mentions should go to the Universal Audio Apollo (/sos/jun12/articles/universal-audio-apollo.htm) and Apogee Symphony I/O (/sos/sep11/articles/apogee-symphony.htm), which can both be equipped with optional Thunderbolt expansion cards.

Next it's time to think about how many inputs and outputs you'll need. If you mainly build up your tracks by overdubbing single instruments one after the other, your needs may well be met by a high-quality desktop interface such as Avid's Mbox (/sos/feb11/articles/pro-tools-mbox.htm) with just two analogue inputs. If you need the ability to record a full band, by contrast, eight inputs is a sensible minimum. All the interfaces mentioned on the previous pages have at least eight analogue inputs, and most have the same number of mic preamps built in, which means you'll just need mics and cables to get up and running. Some interfaces have mostly line inputs, however, in which case you'll either need a mixer or several stand-alone preamps in order to record multiple microphones simultaneously.

As far as outputs are concerned, the minimum you'll need is two, to listen back in stereo to what you've recorded. Most interfaces have one or more headphone outs, which you can use to let the performers hear what they're playing during tracking. If you intend to mix solely in the computer, that might be all you need, but if you're planning on using a hardware mixer, you'll need several line outs: one for each channel that you intend to send to the console.

Having spare inputs and outputs is also handy, and raises the possibility of incorporating outboard processors into your system. With two unused line ins and outs, you could easily connect, say, a hardware stereo compressor to your interface. Most recording software makes setting this kind of thing up very simple.

Finally, it's worth thinking about how much potential for later expansion you want to incorporate. If you anticipate needing more inputs or outputs in the future, then it's worth investing in an interface that has ADAT I/O. This is a digital audio connection that can carry up to eight separate signals at a time, though to make use of it you'll need an A-D or D-A converter: a box that converts eight analogue signals into ADAT format. Many such expansion units have mic preamps built in, which makes it extremely easy to up your recording channel count significantly, and many of the manufacturers mentioned make units for exactly this purpose.

There isn't enough room here to discuss every aspect of audio interfaces, unfortunately, but if you are in the market for one, you'll be pleased to hear that SOS will soon be releasing a comprehensive buyer's guide, with detailed specifications of almost every model available, along with in-depth articles to help you make the right choice.