Thinking of turning your iPad into a mobile recording studio? Check out our round-up of multitrack recording apps first!

Though primarily a guitar-amp and effects modeller, the iOS versions of IK's Amplitube can be upgraded via an in-app purchase (£10.49$14.99) to offer a feature called Studio. This allows for eight tracks of recording (or four in an iPhone), with effects applicable per track as well as on the main mix. Tracks can have their effects 'frozen' to free up processing, 'bounced' to free up channels for more recording, and audio can be edited in the waveform display. 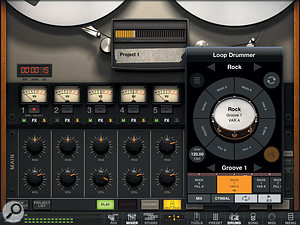 Arguably the most 'professional' iOS DAW around, Auria can accommodate 48 channels of playback and 24 channels of simultaneous recording, at up to 24 bit/96kHz, and it even has support for video. Many of the included effects and processors are coded by established plug-in makers PSP, its mixer has eight subgroups, and the automation implementation is total: volume, pan, sends and plug-in parameters can all be automated, either by recording or 'drawing' in automation lanes. 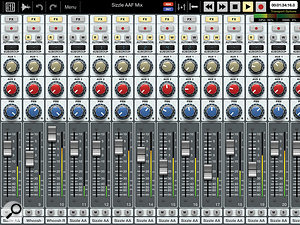 With support for up to 32 tracks, the free app Garageband comes with a variety of built-in instruments, including piano, drums and a virtual string section. An in-app purchase upgrades it with nine guitar-amp and 10 stompbox models, as well as a sampler that lets you import your own recordings. One unique feature is called Jam Session, which lets multiple Garageband users play together via Wi-Fi or Bluetooth, with the designated 'Band Leader' controlling the transport for all participating iOS devices. 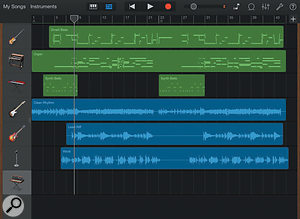 HarmonicDog's simply named Multitrack DAW app can record up to eight tracks of audio in its simplest incarnation, though this can be expanded to either 16 or 24 tracks via in-app upgrades. Each channel has access to compression and EQ, and there's also global reverb and delay. The main mix bus also has EQ and compression for basic mastering, and audio can be exported from the app via Wi-Fi using Apple's iTunes. 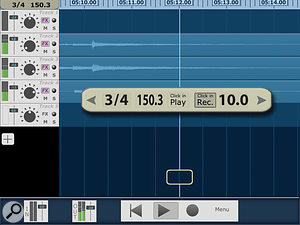 Famously used by Gorillaz on their album The Fall, XL Recording Studio lets you record up to eight tracks, and comes bundled with 78 pre-recorded loops in a variety of genres. A slider at the bottom of the UI allows you to navigate your song's timeline, and each song has its own text page, allowing you to make a record of notes or lyrics. When you've finished recording, you can email a final mixdown from directly within the app. 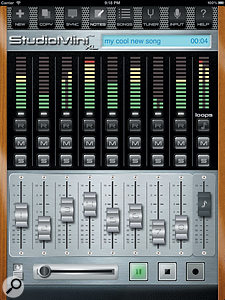 Meteor's iOS DAW can record up to 16 tracks, or 24 with an upgrade. It's compatible with CoreMIDI, so can sequence other iOS apps, including synthesizers, and comes with a host of virtual instruments and effects. The mixer gives each track access to three send effects, and the app even includes an automatic pitch-correction processor. Thanks to its MIDI Clock implementation, it can also be synchronised with other studio hardware, including external instruments and hardware sequencers. 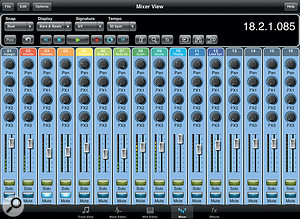 Taking its name from one of the older entry-level versions of Cubase, Cubasis aims to make iPad music-making a familiar task to users of Steinberg's long-established DAW. It supports up to 24 physical inputs and outputs, and provides for unlimited audio and MIDI channels. Over 85 instruments based on Steinberg's HALion Sonic soft synth are included, as well as an analogue-modelling synthesizer, the Micrologue. Twelve different effect types are also present, and can be assigned to any of three per-track insert slots or three global sends. 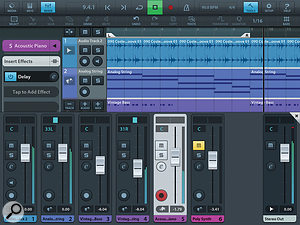 An eight-track recorder, StudioTrack offers a four-band EQ, delay and compression per channel, as well as EQ and compression on the master bus. If eight tracks proves insufficient, you can bounce your project to a stereo track, and have it appear either within the same project or a new one. The built-in metronome can be set to a specific bpm manually, or by tapping the tempo, and it can also keep time using a range of pre-recorded drum loops in a variety of time signatures. For guitarists, a tuner and a selection of amp and effects modellers is also included. 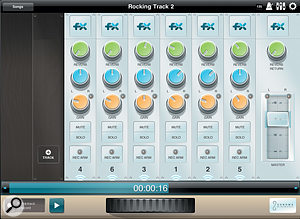 When Apple launched their first iPad in 2010, it was derided by many as being little more than an oversized iPhone. Much has changed since then, however: the newer models all feature much faster processors, higher-resolution screens and greater capacity for storage. But perhaps the biggest advance, as far as musicians are concerned, has been the proliferation of audio apps. Thanks to the mushrooming iOS development industry, an iPad can now feasibly replace such indispensable tools as a spectrum analyzer, test oscillator, control surface, synthesizer, guitar tuner, amp modeller... and even your DAW.

A Bite Of The Apple

Choosing an iPad over a computer or laptop for serious recording has much to recommend it. For starters, they're designed to be intuitive and easy to use, which would certainly be a welcome attribute in the heat of a session. The last thing you want to be doing in between shepherding musicians and untangling XLR cables is plugging in a mouse and keyboard and faffing about with menus.

Reliability is also a big consideration. Apps sold via Apple's App Store are generally tested quite vigorously, and since DAW apps tend to be much simpler than their full-blown software counterparts, there's usually less to go wrong with them. What's more, and unlike computers, iPads have no moving parts, which means they're less sensitive to the occasional jolt that can befall computers and laptops. Also, the absence of any fans means that iPads are completely silent in operation, so you'll never suffer from the fan-whirring or hard-disk access noises that can plague computer recordings.

Before you go rushing off to the App Store, however, it's worth noting that you may need to invest in some hardware before your iPad is ready for serious recording. Although some audio interfaces can connect straight to an iPad, many require the optional Apple Camera Connection Kit, which endows iPads with a standard USB port. Even then, for an interface to work with the iPad, it must be Class 2.0 Compliant — in other words, it must have the ability to work on computers without any drivers installed. Further complicating things, some interfaces work in Class Compliant mode but only with limited functionality... The good news, though, is that most of the app developers on the previous pages maintain a list of interfaces that are known to work with their iOS DAW, so if yours isn't already iPad compatible, you can easily find one that is.

While the compact and portable nature of iPads makes them very well suited to recording, sometimes the power of a 'proper' computer is needed come mixdown time — especially for larger projects. Thankfully, most DAW apps make it very easy to export your recordings should you wish to do so, with some even offering wireless transfer of audio files via iTunes. And once you've transferred your project to your 'main' studio computer, your iPad will become free once more to perform one of its many other tasks — perhaps acting as a control surface to help you mix your location recording! 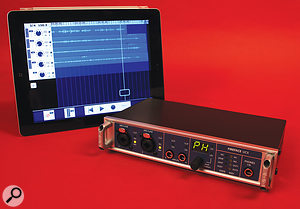 Portable, silent and easy to use. Could this be your next studio?