For the latest addition to the 'Real' range, Music Lab have turned their expert attention to the classic Les Paul Custom. 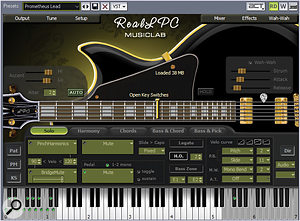 When Music Lab released Real Strat at the tail end of 2007, they unleashed a powerful and articulate virtual instrument that was capable of eliciting astonishingly realistic guitar performances based on the sound of the Fender Stratocaster. When I reviewed it in the January 2008 issue of SOS, the 'Cons' section stated "None, except 'more guitar models, please!'” Well, it seems that Music Lab had no intention of letting the idea rest there, and now the 'Real' treatment has been applied to another electric guitar icon — the Gibson Les Paul Custom (hence the LPC of the title). It could almost be seen as a fitting tribute to the late, great Les Paul. Real LPC is effectively a re‑skinning of Real Strat, using a completely new core library of Les Paul Custom samples.

Operationally the two instruments are identical, having the advantage that sequenced performances previously played by Real Strat can be redirected to Real LPC and still work as intended, so long as the corresponding performance parameters are set up identically for both instruments. Real LPC's GUI depicts a glossy black Les Paul guitar with gold trim, set against a dark green‑gold background. The overall dark colour scheme makes the parameter legending a little less legible than on Real Strat, although the brightness and contrast settings of my LCD monitor may have some bearing on this.

I should also mention at this point that the entire sample library comes in at around 2GB and that Real LPC is fairly gentle in terms of both RAM and CPU requirements. 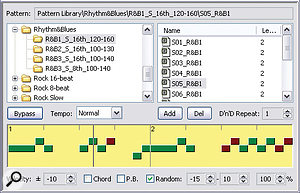 As Real Strat and Real LPC share an identical layout and parameter set, for a detailed description of the overall concept it's worth revisiting the Real Strat review at /sos/jan08/articles/musiclabrealstrat.htm. To reiterate briefly, Real LPC offers five performance modes; Solo, Harmony, Chords, Bass & Chord and Bass & Pick. Solo mode (to my mind, the instrument's true highlight) is fully polyphonic, giving access to a vast array of articulations and guitaristic techniques, all accessed via keyswitches. The other four modes employ variations on the 'strumming' technique: hold a chord with your left hand while 'strumming' it using dedicated trigger keys located higher up the keyboard. Real LPC analyses your chords and produces suitable guitar voicings. These are also dependent on other factors such as your position on the keyboard, and the position of the virtual 'capo'.

Real LPC also features the same built‑in Pattern Manager as Real Guitar and Real Strat. Pattern Manager is a library of pre‑programmed MIDI-file strumming patterns that can be dragged and dropped into your sequencer tracks and copied and pasted as required. All you have to do is play chords on the keyboard, and Pattern Manager does the strumming for you. Useful for quick song construction, perhaps, but never as effective, realistic or fun as a spontaneous, hands‑on performance! 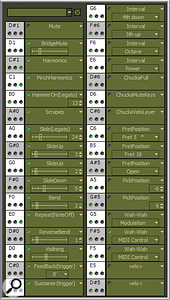 Real LPC's keyswitch window, showing the 33 assignable keyswitch locations. The sliders and drop‑down arrows on some articulations allow the user to set the speed and range of the effect.

Many years ago, as a keyboardist who had lovingly assembled a multi‑keyboard rig of carefully chosen instruments, I naively wondered why electric guitarists felt the need for more than one guitar — surely they all sounded the same? Happily, I recovered from that daft misconception, and Real LPC clearly demonstrates just how different two guitars can sound. As a non‑guitarist, I'm fully aware of the risk of 'misquoting the Bible' with the following comparisons! Nevertheless, on the one hand we have the bright and wiry tone of Real Strat. This is well suited for a wide variety of styles, such as country, American AOR, ska, reggae and rock & roll. However, that inherent wiriness can be problematic when recreating overdriven low‑end riffs and single lines, due to the slightly enharmonic quality of Real Strat's sound in the lower registers. The upper frequencies tend to be magnified, sounding rather like excess fret rattle, resulting in a blurred sound and subjective loss of clarity. Some fairly drastic EQ is necessary if you want to minimise these artifacts.

On the other hand, Real LPC has a comparatively muted, bell‑like tone with warmth and solidity, the accent being on the mid‑frequency range. The differences become very apparent when playing overdriven lead sounds in the lower range — typically, those powerful, underpinning lines that parallel the bass part. Real LPC displays far less of that enharmonic quality, resulting in a distinct solidity and clarity of pitch. This makes it ideal for heavy metal riffing, power chugs, palm-muted phrases and other styles where crisp execution and clarity are essential. Real LPC is therefore well suited to metal, heavy rock, progressive, Britpop... in fact, any style where soloing, riffing and power chords are the order of the day.

When heard with no processing, Real LPC has a more pronounced initial attack than Real Strat, giving the impression that the sustain portion of notes doesn't ring out as long, but in fact it does. The overall tonal character can be adjusted using the pickup position slider, which offers 14 different positions, from bridge to body pickup and anywhere in between. In conjunction with the treble and bass EQ settings, a reasonable variety of 'colours' is available even before you start to add further processing. Real LPC responds very well to effects such as chorus and rotary speaker, lending strummed chords a distinctively chiming and lively character.

Over the last couple of years, Real Strat has become an essential part of my recording setup. It's so expressive and versatile that I recently used it (and Real Guitar) to provide almost all the guitars for an entire prog rock album. If there were any reservations at all about the tonal qualities of Real Strat under certain conditions, Real LPC offers the perfect foil — and this is hardly surprising, considering that many guitarists switch instruments on a regular basis to suit the style of music they're playing. The only improvements I could think of are marginal: optional skins, perhaps? A choice of gold top or sunburst would be nice. Individually tunable strings would also help to create a 'slightly less than perfect' vibe.

Music Lab have an inspirational suite of instruments in their 'Real' range, and one wonders what the next in the electric series might be. Something quite different, but complementary, perhaps? How about a 12‑string Rickenbacker?

The would‑be virtual guitarist now has several options to chose from, in the form of both sample‑based and physically‑modelled software instruments. As well as Music Lab's own Real Strat and Real Guitar, the other main contenders are AAS Strum Electric GS1, Steinberg Virtual Guitarist 2 and Prominy SC Electric Guitar, all of which have been reviewed in SOS.

Alternatively, if you can stand the preening and posturing, you could try using a real guitarist...

As with Real Strat, Real LPC comes bundled with Amplitube 2 Duo, a cut‑down version of IK Multimedia's Amplitube 2 Guitar Amplifier simulation plug‑in. Although providing limited facilities, this is a welcome freebie to get things rocking if you don't already have an amp plug‑in. There are also plenty of freeware amp simulators available on the net if you're strapped for cash and want to explore the possibilities further. For those on a modest budget, I'd suggest Studio Devil VGA as a good all‑rounder with plenty of tonal variety, and for those who want the full‑shred, mega‑rig experience I can heartily recommend NI's Guitar Rig 4.

Music Lab have expanded their excellent 'Real' virtual guitar range once more with this highly playable Les Paul Custom variation. It's the perfect foil to Real Strat, offering a wholly different feel and tonal colour. Armed with both Real LPC and Real Strat, you should be able to find a guitar sound to suit almost any style of music. Highly inspirational for would‑be guitarists, and a great way to provide guitar parts when a real player isn't an option — or if you're simply a control freak. Very highly recommended!