There are few pieces of soundtrack furniture better guaranteed to get that adrenalin surging than a team of perspiring percussionists giving their instruments a good drubbing. There are now a few sample developers offering loops of such textures, the latest of which is Cinematic Edition, a third member of Nine Volt's Action Drums series. A wide range of orchestral and ethnic drums and percussion is featured in the library, although taiko is conspicuous by its absence; that's the preserve of the (also first‑class) Taiko Edition library. 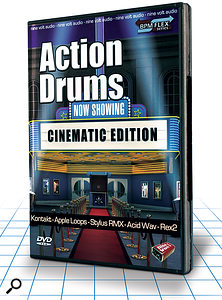 This is essentially a REX library (although you also get Apple Loops and Acidised WAVs at a couple of representative tempos), recorded at 24-bit resolution and comprising 12 'Suites' of loops. Each Suite is built around roughly seven layers of percussion and has a nominal tempo covering the 90‑170bpm range, although Nine Volt Audio's well‑above‑par REX encoding lets you modify tempo a lot further than you might normally expect to be able to. Within a given Suite, a folder contains a selection of full mix loops (a total of around 150 of these files) and then corresponding additional folders allow access to the individual constituent layers. Supplementing these are mixed and single layer one-shots for endings and refinements, plus a few special effects one‑shots (bowed gong, anyone?) as a bonus.

The elegance and flexibility of the organisation takes some beating. Each Suite has a clear sonic identity and, once you've got one you like, you can either just use the full mix loops or load in the layer loops for more arrangement and mixdown options. The available options are enormous, yet it's quick and easy to use, especially with the supplied Kontakt or Stylus mappings.

The sound is powerful and authoritative, with punch, rumble and body in abundance, plus a tasteful bloom of concert-hall ambience. The low end is also very well controlled, which is a boon at the mix. The performances are spot-on, too, exhibiting that human ebb and flow that can inject real excitement and momentum into proceedings.

If I pull out my pickiest tweezers, I could complain that you don't get any control over the amount of room sound, even though the recording sessions apparently used both close and distant mic placements, so there's a limit on the usability of this material for dryer styles. There are also no five- or seven-based time signatures, so you may have to get busy with your REX slices if that's in the brief. To be honest, though, I'm splitting hairs here. This is another brilliant addition to the Nine Volt product line. Mike Senior