Can a ribbon mic really offer professional polish at such a bargain price? 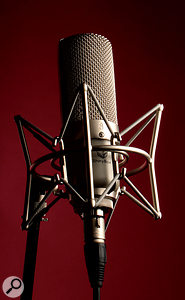 Often, I find that the most interesting products come from those small companies in which the people involved have a true passion for what they design and build. Shiny Box Microphones are the brainchild of Jon Ulrigg, who's a musician, songwriter and studio owner from Washington State in the western USA. I haven't discovered where he sources components for his ribbon mics, but Jon assembles every mic by hand, tuning the ribbon assembly to his own specifications. Such hand‑building usually results in a hefty price tag — but thankfully not in this case: these are amongst the most affordable ribbon mics I've tried.

The 46MX ribbon mic comes complete with a shiny aluminium box, a black canvas storage pouch and a metal shockmount, which looks like a stock Chinese‑built part (but is none the worse for that). There are in fact three variants of this mic, the 46MX reviewed here being the lowest‑priced model. Add around 50 percent to the price and you can buy the 46MXC, which has a CineMag output transformer, or the MX46MXL, which uses a Lundahl transformer instead. This seems to be an incredible deal, as the 'name transformer' variants still come in at under $400£300 including VAT. The company also build a transformerless mic preamp, the Si 500, which can be used with capacitor, dynamic or ribbon microphones.

The case is designed to allow the mic to be stored upright, which helps prevent the ribbon from sagging under its own weight. The ribbon itself is two inches long, and made from aluminium that's only two microns in thickness — so dropping this mic is not recommended! The balancing output transformer brings the output impedance to a manageable 200Ω, making it well matched to the majority of mic preamps. There's very little detailed specification and no response curves, so all we really know is that the frequency response extends from 40Hz to 18kHz — but without knowing how many dB down the response is at these points, this tells us very little. The majority of conventional ribbon mics start to roll off below 10kHz, but of course you don't buy a ribbon mic for its extended frequency response: you buy it for its sound, and that is something which has to be judged subjectively.

There's no figure for sensitivity, although with a passive ribbon mic you'd expect to need a lot of mic‑amp gain, unless working with loud or close sound sources. The polar pattern is, of course, a figure‑of‑eight, due to the dipole nature of the ribbon element.

Phantom power shouldn't damage a ribbon mic if the mic is plugged in before the phantom power is switched on (as equal voltages are present either side of the mic's balanced output). However, if one side of the phantom power is accidentally shorted out or you hot‑plug the mic into an input with phantom power already on it and one pin makes contact before the other, you can end up making the diaphragm leap to one side. This runs the risk of stretching the diaphragm and adversely affecting the performance of the microphone. It's because of this vulnerablity that it is advisable not to connect ribbon mics to phantom‑powered inputs. If you do manage to break a ribbon outside of warranty, a replacement will cost you around $120, though you won't have to send the mic back to the US, as UK distributors KVR can do the job for you.

Constructionally, the mic looks reassuringly solid, with a short, stubby base holding the output transformer and providing an anchor for the ribbon motor. A tall, dual‑layer basket protects the ribbon, and an embossed '8' logo shows us the front of the mic. Given the figure-of-eight pattern, the rear of the mic will be equally as sensitive as the front, but 90 degrees off‑axis it should offer almost perfect rejection. A thread around the XLR housing screws directly into a locking ring in the shockmount, so the mic is quite secure once mounted, even if used upside down. 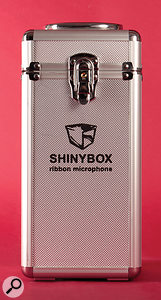 The 46MX's box provides vertical storage, to avoid damage to the ribbon.

The mic on test was the basic model with the standard transformer. I checked it out on electric guitar, acoustic guitar and vocals, using my Universal Audio Solo 110 preamp. A quick test of the polar pattern using spoken word revealed that the sound character remains reasonably constant while moving off‑axis, but the levels fall progressively until you get 90 degrees off‑axis, at which point the mic picks up almost nothing.

As a vocal mic, the 46MX delivers the expected 'rounded' sound of a classic ribbon mic, to the extent that without EQ the result could sound a little on the dull side — although I was pleasantly surprised that it was possible to EQ a lot of 'air' into the sound without noise becoming a problem.

As this is a pressure‑gradient mic, the proximity effect can get a bit over‑generous if you work very close up, as it can with any ribbon mic, but the application of a gentle 6dB/octave low cut via your desk or mic preamp does wonders if you need to clean things up a bit. If you're after a silky, vintage vocal sound — or you need to create a backing vocal that sits behind a main vocal recorded on a capacitor microphone — the 46MX will do it. A more expensive ribbon mic may do it a little better on some level but, from a purely subjective viewpoint, the 46MX nails the vintage ribbon sound surprisingly well and, importantly, sounds far more expensive than it really is.

On acoustic guitar, the sound was full and 'humming', though I found that I needed to dial in some air to get the definition I wanted — which, again, wasn't a problem. Although you need plenty of preamp gain, I didn't have to run my Universal Audio Solo 110 anywhere close to flat out, so only the quietest of sound sources should defeat it. Combining the 46MX with a capacitor mic could produce some interesting results on guitar, because if it's done properly, that could give the best of both worlds: warmth and definition.

My first test on electric guitar was to use the mic fairly close to the speaker grille, around midway between the edge and centre of the cone. This captured the sound of the amp pretty well, though there was a bit too much low end, due to the proximity effect. A little low‑cut filtering gave a very acceptable result, although I also tried miking from a couple of feet away and found the results to be both brighter and less bass‑heavy. The more I experimented, the greater the range of tonalities I came up with, so trying different mic placements around guitar amps with this mic is a must.

I like the sound of a ribbon on electric guitar, as there is generally enough high end to cover the limited spectrum of a typical guitar cabinet, and this mic was no exception — but at the same time, the high‑end grit that can sometimes be a problem when using dynamic or capacitor mics is smoothed out in a very musical way by the 46MX. Ribbon mics also tend to help bring out the throaty low‑end punch of a good amp, and I'm pleased to say that the 46MX didn't disappoint in this respect.

There are benefits, but also 'considerations' inherent in the figure‑of‑eight polar pattern. Sounds from the side are almost totally rejected, but you may sometimes need to place an acoustic screen behind the mic if you don't want to pick up sound or room ambience from the rear. The 'deaf at the side' characteristic can, however, be extremely useful when trying to separate sounds, as you can arrange the mic with its deaf axis pointing towards the source of potential spill.

My conclusion has to balance the fact that — in terms of price, at least — the 46MX is an entry‑level ribbon mic. If you haven't used ribbons before, it provides a great introduction to the unique character of this microphone family, and it can turn in surprisingly good results on a variety of sound sources, including, but not limited to, electric guitar amps, acoustic guitars and vocals. If you're used to working with bowed strings, you might be pleasantly surprised by its buttery‑smooth high end, and I suspect it would even serve well as a distance mic in front of a drum kit. I have to say that at this price, the 46MX is almost an impulse buy.

At this price, only the Golden Age ribbons spring to mind, though you can also buy ribbon mics that won't break the bank from companies such as Audio Technica, MXL, SE Electronics and Sontronics.

This is a great entry‑level ribbon mic that can produce extremely musical results. Ribbons aren't ideal for everything, but there are some jobs they do brilliantly.