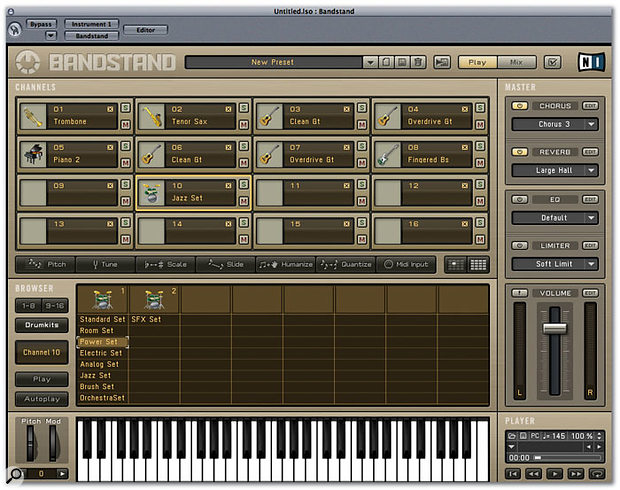 General MIDI synths are rarely glamorous, but there's no reason why they shouldn't sound as good as more professional alternatives — that, at least, is the thinking behind NI's Bandstand soft synth.

I tend to think of Native Instruments as a company who push at the boundaries of software synthesis with products like Reaktor and Absynth, but Bandstand is more mainstream, if no less useful: it attempts to address the need for a sample-based General MIDI (Type 1) player capable of delivering optimal sound quality. The supplied sound library is some 2.5GB, which is rather more generous than the tens of megabytes normally offered by soundcards and GM player modules. Bandstand comes with a General MIDI 1-compatible instrument library comprising the 128 standard instruments plus nine genre-specific drum kits. It may be used as a stand-alone GM player or as a plug-in within VST, Audio Units, RTAS, DXi, ASIO, Core Audio or Direct Sound hosts, and Mac OS 10.3 and above is supported along with Windows XP.

Direct-from-disk streaming is built in to allow long samples to be used in systems with limited memory, though having said that, I think the recommended minimum of 512MB (768MB for PC) is somewhat on the frugal side for today's machines; anyone seriously interested in computer-based music production really should have at least 1GB of memory fitted, and ideally much more. The recommended minimum CPU spec is a 2GHz G5, Pentium 4 or Athlon XP, and the software loads from a DVD-ROM so a DVD drive is obviously a requirement. Once loaded, the software must be authorised on the NI web site before it can be used, and updates can be downloaded there too; even while I was working on the review, an update to version 1.1 was announced.

Bandstand features a mixer with effects, including both synthetic and convolution-based reverbs, and there are also some sequencer-like editing features including timing quantise, scale quantise and even a choice of classical note tunings in addition to the more common equal-temperament scale. There's also a useful amount of editability, but not at the expense of complexity. Bandstand uses a mixture of simple menus and drag-and-drop techniques, and comprises just two main windows. A Quick Edit bar makes tweaking sounds straightforward, allowing real-time transposition, scale tuning, quantisation and the addition of a degree of human randomisation to the playback timing, while making adjustments to the mix or switching instruments is very intuitive.

An interesting aspect of Bandstand is that the core sample library has been sourced from a number of big names in the sample provider world, specifically Sonic Reality, Best Service, Big Fish, The Badroom, Soundwarrior, Sound Ideas, Modo Bierkamp and Peter Siedlaczek, whose orchestral library is held in high regard. NI are responsible for the synthetic sounds, though they also mastered the other samples to achieve a consistent sonic character across the Bandstand library. Though it bears little visual resemblance, the playback system uses the Kontakt 2 engine and supports GM2, GS and XG MIDI Controller automation, and when used as a plug-in, all the mixer parameters can be automated using the host's own automation system. In addition to the reverbs already mentioned, there's also chorus, limiter and a three-band equaliser that can be applied to each of the parts.

When you first open Bandstand, you see the Play View page (shown above), where the 16 cells at the top hold the instruments you decide to allocate to General MIDI's 16 parts. Drums always have to go into the cell for channel 10, as GM regulations dictate, but otherwise you can drag and drop from the browser sections below. Each instrument can be set to polyphonic or mono playback mode, and an Autoplay button plays an appropriate short motif on each selected sound for auditioning purposes. The browser is split into two banks to avoid crowding the screen, but you only get a single 128-sound GM set — there are no XG or GS style variations. The Edit bar sits in the centre of the screen between the two sections, and two buttons on the right let you decide whether your edits apply to the selected cell or to all cells.

In the Play window you can save or load presets and also import and play General MIDI files. Individual instruments may be muted, soloed or evicted from their cells. If you've moved the library samples, you can also reset the path to the new location from here, and this page also allows you to set the disk streaming options. For the currently loaded preset (a preset comprises all 16 instruments and their settings), you can use a comprehensive MIDI filter to determine whether Bandstand should use or ignore program changes and mixer settings as well as various types of MIDI performance data, including pitch-bend, portamento and so on. Similarly, you can set a filter for sound settings (envelope and filter data) as well as adjusting global settings for master volume, velocity scaling, master transposition and overall tuning. The same applies to effects — you can decide whether Bandstand acts on the MIDI data or not in respect of reverb, chorus, master EQ and master limiter settings.

The sophisticated tuning options are worth a further mention, as you can also select Pure, Overtone 16-32, Pythagorean Mid, Pythagorean Up, Mean Tone 1/4, Sibermann, Werckmeister III, Kimberger III, Neidhardt 1, Valotti and Young tuning system variants. Oddly, though, there's no quarter-tone option for creating Eastern music. Similarly, the MIDI data can be quantised to a huge number of different scale types, from Blues to Messiaen VII. If NI ever put this in a separate MIDI processing plug-in that will work in Logic, I'll buy it! The degree of portamento can be individually adjusted for each instrument along with humanise and quantise parameters. Bandstand includes a five-octave on-screen keyboard (with three octaves of further transposition) for trying out sounds or edits. 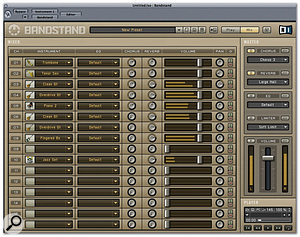 Mix View is the other main window, and presents the 16 sound cells to the left of the screen with the mixer faders, pan controls and effects sends (chorus and reverb) in the right half of the screen. Each channel also has solo and mute buttons, while in the master section, you can select from various chorus and flanger types or switch between synthetic or 'real' (convolution) reverb, as well as select from a useful number of rooms, halls and plate. The EQ is three-band parametric, with the bands shown by points on an EQ curve display. Once a point is selected, its gain, frequency and bandwidth can be adjusted using the knobs below, though there's a whole load of presets to get you started. The output limiter is adjustable, and you can use it as a mastering tool to make your mix louder, though its main purpose is to act as a safety net against clipping. In the master section you can also adjust the playback tempo and loop the file for playback where necessary. Bandstand 's mixer can also be controlled using GM1, GM2, GS, XG or Hyper Canvas protocols, but if you need to automate your mixer beyond what is already embedded in the MIDI data, it's easier to do so using a sequencer, where you need to set up Bandstand as a multi-channel instrument.

Bandstand is indeed very easy to operate, and most of the time you won't need to explore the more exotic options. If you just want to play back a MIDI file and make it sound good, you probably don't need to go further than the mixer, and you can use it as a stand-alone program rather than as plug-in if you prefer; it can still generate a finished audio file of your mix. The quality of the sounds is generally rich and warm, but most importantly, they seem to work together in a very complementary way. I felt some of the sounds could have benefited from more multisampling to capture the playing dynamics of the real instrument more accurately, but once you get your file up and playing, it manages to sound confident and cohesive in a way that most GM players don't. Having a decent built-in reverb also helps, and while this is of necessity a simplified version of what you might expect in a full-featured reverb plug-in, it manages to create the right sense of space, whether for a pop mix or a symphony. Clearly the limited orchestral sounds in a GM synth are not going to rival dedicated orchestral libraries, but what you do get sounds good and is comprehensive enough for most general compositions, which after all is what GM is all about.

I did my plug-in tests within Apple Logic by simply setting up 16 tracks pointing to the same instrument (Bandstand) and setting the MIDI channels to All. Next I dragged in some MIDI Files gleaned from the Internet and as soon as these started to play back, Bandstand loaded the appropriate sounds and started playing. It really is as easy as feeding GM files to a hardware module, and if you do need to make adjustments, the graphical interface makes this more intuitive. Usually Bandstand doesn't get all the sounds loaded in time to play them, as the process takes a few seconds: in this case, all you need do is stop playback for a few seconds after loading has commenced, then play again from the start.

On the whole the results were impressive, and even the guitar parts were rendered quite passably on many songs — to my ears, sampled guitars are never a complete success because they can't hope to capture the performance articulation of the real thing, but Bandstand did better than most in this area. The large sound library certainly pays off in terms of overall sound quality, and though GM can never entirely escape the limitations imposed by its prescribed sound set, Native Instruments have done an extremely good job and offered the user an enormous amount of flexibility without it getting in the way of straightforward operation.

Bandstand is a serious option for those who work regularly with General MIDI files or who need to create material in that format.