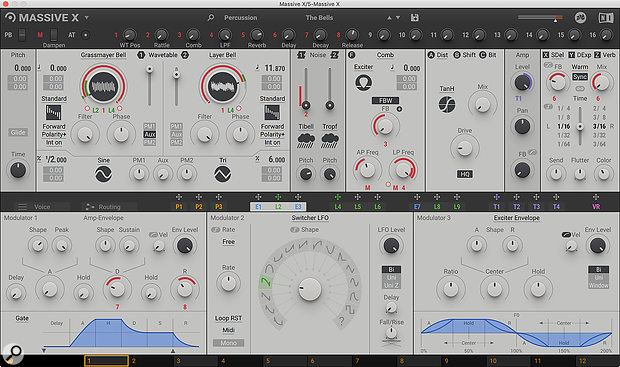 Modulation is king in Massive X. The new Exciter Envelope is great combined with the Comb filter for physical modelled sounds.

Massive is one of the best-known and best-loved soft synths of the last decade. It's super-versatile, although it's often associated with dubstep and its offshoots thanks to its ability to generate huge snarling and throbbing sounds. As well as being influential in bass music, it's inspired a generation of modern soft synths like the equally ubiquitous Serum and Pigments, both of which borrow heavily from Massive's wavetable synth concept and modulation system.

Rather than rebooting the original Massive, NI have produced a sequel: Massive X. Massive (no X) lives on, maintaining compatibility with old songs and providing a tasty synth for NI to bundle with hardware and mid-level Komplete packages.

A blank canvas has advantages and disadvantages. On the upside, NI have been able to completely re-think the architecture and UI. While the original plug-in pushed 2007's CPUs to the edge, it no longer sounds or looks as modern as it once did. X is sonically on another level and benefits from modern UI niceties like high-density, scalable graphics.

Starting from scratch is a lot of work though, and even after a lengthy delay Massive X appears to have been rushed out with a number of things left on the developers' backlog. NI have promised to fill some of these gaps in updates.

Massive X looks like a completely different synth. It takes design cues from Reaktor Blocks, appearing like two rows of rack modules. The original midnight blue panel is replaced with a flat, warm grey that lets the coloured modulation rings pop out. The upper half always shows the synth controls, while the lower switches between different tabs for modulation, routing and voice setup.

NI are still calling Massive X 'semi-modular', but it is in essence fully modular. The original Massive combined crossfader points and a partially interactive signal flow view to set up the synth's internal patching. X replaces these with a freely editable, Reaktor-style routing page. This may be daunting for casual users, but gives sound designers great scope for patch creation.

The starter palette of synth modules has actually been simplified, with two primary wavetable oscillators instead of three and a single filter instead of two. One of the keys to Massive's aggressive sounds was oscillator phase mod courtesy of a dedicated modulation oscillator. Massive X has two such oscillators, with independent depth to each of the main oscillators, plus there's an Aux PM control that injects additional oscillator mod from any other signal point.

More simple oscillators can be added as Insert modules and used as extra audio layers, or as modulation sources for the main oscillators or each other. Up to two mod sources can also be added as audio–rate signals in the router. Extra filters are available in a Utility insert module. The idea of keeping a number of modules as options is a good one, letting you add what you need for a specific patch instead of having a fixed panel cluttered with unused sections.

Massive X's primary sound generation remains the same: wavetable oscillators with banks of preset wavetables. The wavetables are all new, although there is a selection of 'remastered' favourites from the original set. The wavetables can be twisted and modified in many more ways than before. The original had a spectral filter, some 'bend' variations and a formant processor. Now you get 10 modifiers with multiple sub-modes and individual controls to completely warp the sound at the oscillator level.

The main oscillators are complemented by two noise generators with multiple 'noisetables'. As with the original Massive there's no ability to import wavetables or samples. I don't know if this is something that might change in the future but it's not a priority for me.

I did a fairly simple test to compare the oscillators with the originals by selecting a sine wave and playing very high notes to reveal any aliasing. I was rather surprised to hear more aliasing coming from X than the not-X. Eventually I figured out that the aliasing tones were coming from the default Asimov filter rather than the oscillators themselves.

The main filter section features all new modes, including the Monark filter from NI's Moog clone. The classic Scream filter from Massive is gone, but there's plenty of acidic harmonics to be found with the Scanner and Croak modes. The SVF filter sounds like an SEM-style filter. Despite the name, it features discrete modes and a single output. The SVF Parallel and Serial modules do, however, offer multiple dual filters mixed to the output.

The Inserts section benefits from some of the most interesting and useful updates. This is an area where you can add up to three additional modules, all of which can be independently patched inside the Routing map. There's a selection of effects and signal processors, including updated versions of favourites from the original Massive like the Frequency Shifter and Bit Crusher.

Additional oscillators can also be blended into the mix here. There's a simple Sine/Saw/Pulse oscillator, and a Phase Mod oscillator which is modulated by the input signal. The Utility module is a high-/low-pass filter pair with variable slopes, which can provide sound-shaping duties while leaving the main filter for more colourful processing.

Three additional effects slots offer master effects that can be patched in in various ways. Some, like Reverb and Dimension Expander, share their names with effects from the original Massive but are a significant jump up in quality. New highlights are the Quad Chorus and the Nonlinear Lab, the latter of which is a suite of drive and amp sim effects.

X can still produce classic synth sounds and the trademark Massive filthy growls and wubs, but what really stands out when you browse the presets is the range of beautiful, delicate tones and deep sound-tracky textures.

Massive's signature modulation system remains in Massive X. Mod sources are attached to synth parameters via drag and drop, and appear as small tags under the controls. Empty slots are now hidden, making for a tidier panel overall. Mod depth is set by clicking and dragging on the tag, with the resulting mod range indicated by coloured bands.

There are lots of new sonic possibilities with three phase mod sources and spectral modifiers, like the Gorilla mode!

The ability to scale one modulation assignment with another has been reworked for the better. The scaling/side-chain source is now placed in the centre slot of the three mod inputs on each control. When the slot is populated dials appear next to the other direct modulators and provide a means of setting the scaling amount. In the old Massive side-chain modulation was all or nothing.

LFOs are available in two types: Random and Switcher. The Switcher provides traditional LFO duties but with a lot of fine control. It takes its name from the large dial that provides a modulatable method for selecting the LFO shape; it's like a wavetable LFO.

Familiar envelopes are sourced from the Modulation Envelope, but again there's detailed control over each stage. There are multiple gate and looping options, and reset and Note Off modes. An alternative envelope type, the Exciter, provides very fast Attack-Release functions and a two-stage bi-polar envelope mode. This is great for percussive sounds and plucks.

With all the advanced control over these envelopes and LFOs, it's a glaring omission that Massive X provides no graphical feedback of the modulation shapes you create. The original Massive had this visual feedback for all its modulators. X has only static graphical guides that indicate the stages that the knob controls affect. Documentation for the envelopes and LFO is also still unavailable as I write, so there's a certain amount of guesswork involved. Thankfully then, NI have promised that animated envelope curves will return in a future update.