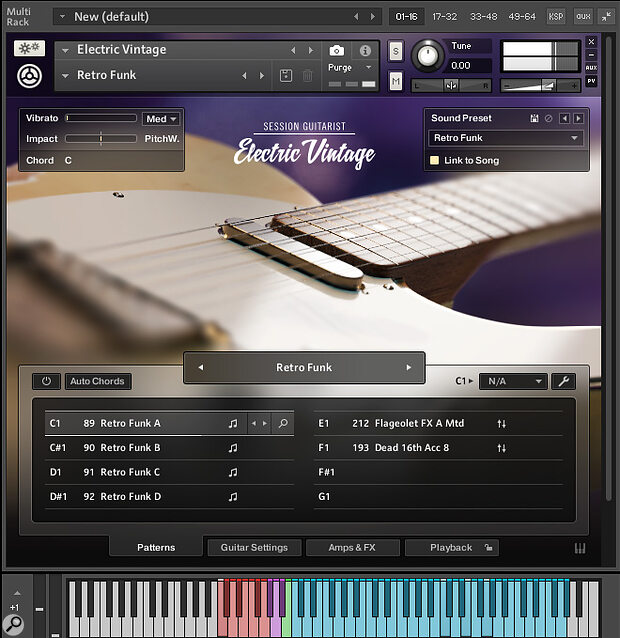 I’ve reviewed a number of the Native Instrument’s Session Guitarist titles for SOS and been very impressed with the slick user interface, easy of use, and — most importantly — the sounds and performances available. Each title within the series is built around a different type of acoustic or electric guitar and the performance content is styled appropriately. A welcome addition with a couple of the more recent titles (for example, Electric Sunburst Deluxe) has been the inclusion of a second Kontakt instrument designed for playing melodic parts and that sits alongside the standard chord/picking pattern‑based performances in the original. This greatly increases the versatility of the product. And, thankfully, it looks like it has become the norm as the latest release in the series and the subject of this review, Electric Vintage, features the same ‘two instrument’ format.

As suggested by the cover art, Electric Vintage has been created around samples and performances from a vintage ’50s Fender Telecaster. While high‑end recording technology ensures pristine audio, that classic single‑coil twang underlies both sounds and performances in the library. That said, there is plenty of scope to customise the tone within the UI, whether that’s by selecting the very sweet‑sounding neck pickup or adjusting the virtual amp and effects combinations.

In terms of performance styles, Electric Vintage actually covers quite a lot of ground with its combinations of strummed open and muted chords, arpeggiated/picked chords, riffs and various other playing techniques such as dead notes, harmonics and glissandos. There are also some reversed patterns. The performance presets span ballad picking, country, Americana, soul, funk, RnB, pop and rock and, for me at least, NI’s development team seem to have steadily refined and expanded on what’s possible with the Session Guitarist engine. Yes, it’s a pattern‑based engine, but if you fully exploit the keyswitching options, you can coax a lot of performance variety from this instrument.

For non‑guitarists, Electric Vintage is about as easy as it gets to create a polished electric guitar performance.

That is, of course, supplemented by the very useful ‘melody’ version of the instrument. This adds open, muted, flageolet (harmonics) and tremolo picked articulations alongside a smaller set of pattern keyswitches so you can combine melodic parts and pattern‑based performances from a single instance. It works very well, and the muted note articulation is actually a very effective way of adding a chord performance with user‑control over rhythmic pattern.

Electric Vintage is an excellent addition to the Session Guitarist series. Like the other titles, it makes it incredibly easy to add a guitar performance that follows your chord changes to your project and the sound is versatile, high quality and easy to mix. Even as someone who is primarily a guitar player, there will be times (and deadlines) where an NI Session Guitarist is an ideal choice. For non‑guitarists, Electric Vintage is about as easy as it gets to create a polished electric guitar performance.