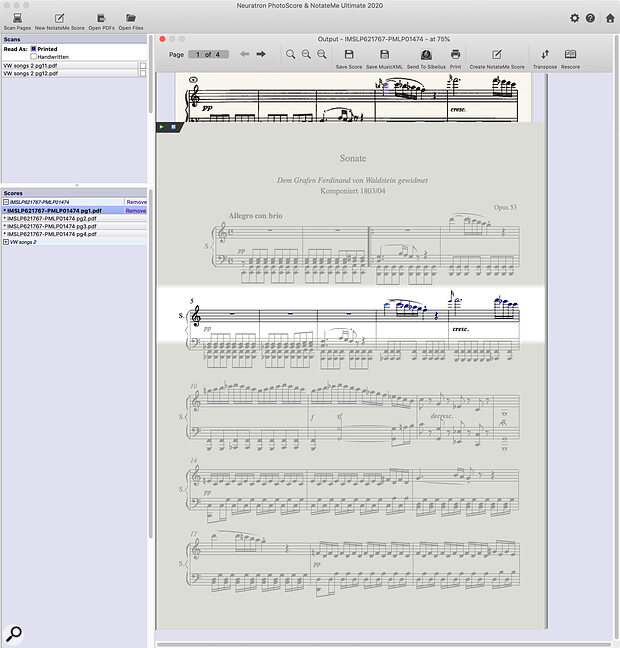 The main PhotoScore environment. It took about 5 seconds to generate this detailed, clean notation from a printed original scan. There are tiny errors in the live notation (like the missing grace note next to the highlighted note), easy to spot against the display of the original scan at the top, but overall the accuracy is excellent.

Let Neuratron take the misery out of copying musical notation.

Engraving and scoring applications like Sibelius, Musescore, Dorico and Finale are one of the wonders of the modern age for musicians. The ease with which beautifully proportioned, accurately laid‑out scores can be generated and manipulated would have been unthinkable even 50 years ago.

At the same time, they can be horribly labour‑intensive, and copying existing printed music is particularly tedious. That’s where PhotoScore & NotateMe Ultimate, the subject of this review, comes in: it’s essentially optical character recognition (OCR) for music.

The software provides a flatbed scanning interface, imports PDFs and other graphics files, and accepts handwritten symbols through touch‑enabled tablets and laptops. It then extracts pitch, rhythm, lyrics, guitar tab and more, turning it into live notation data. That can be passed on to Sibelius (directly), to other notation applications via MusicXML or NIFF export, or to your DAW as MIDI. The software has some editing and basic engraving/printing facilities of its own, too, so can stand alone for many jobs. The potential time savings are huge: how is it in practice?

Most work in PhotoScore centres around its single main window. Clicking the Scan Pages button opens a floating window that in Mac OS, at least, gives you familiar OS‑level functionality. (Not that I had performed a flatbed scan, I realised, for perhaps half a decade before undertaking this review). PhotoScore offers you tips about optimum scanning settings, and these are of absolutely vital importance if you’re to enjoy success. The system can handle multi‑page scores, and there’s no particular need to scan them dead straight. Pages can also be rotated at a later point in the workflow in case of mistakes or recalcitrant bindings.

However, if a flatbed is a bit too 1990s for you, scores can be imported as PDFs or graphics files too, and I did quite a bit of my testing with an iOS document scanning app.

Whichever way you work you’ll end up with content in the Scans panel. Here your pages exist largely in an unanalysed state, except for an initial assessment of how many systems and staves each contains: user‑modifiable, albeit with some very specific mouse techniques.

Then, conceptually, it should all be very straightforward. Mouse‑over commands in the scans list initiate character recognition, and once complete (a matter of perhaps 5‑10 seconds per page in Printed score mode) the Scores list beneath fills up with editable notation documents.

I say ‘should’ because there’s room for a lot of improvement here. The function of the mouse‑overs and tickboxes overlap strangely, and there are inconsistencies like being able to easily change the page order of Scans via mouse drags, but not Scores, where you might really need it. Drag and drop from the OS is not supported, and while there is an overall logic to it all it’s far from intuitive.

Working on a ‘read’ score page, the live notation data takes up the majority of the application window. Unexpectedly (at first) much of it will be greyed out, and only ever a single stave, where your mouse is pointing, appears with normal contrast at one time. At the top of the window the corresponding stave of the scan appears in a much shallower, fixed‑size strip.

The idea here is that because the live notation will often have some errors, a manual tidy‑up job (or at least a check) will nearly always be required. The interface certainly does make the connection to the original scan (which essentially becomes your editing reference material) abundantly clear. It’s also miles better to sort out problems in PhotoScore than in your scoring application, because it’s both more revealing of and tolerant towards bars/measures that are too long or short for the time signature. Ill‑fitting rhythmic contents are flagged by squiggly red lines and little beat under/over‑run totals. A floating window called the Bad Timing Navigator (thinks: could do with one of those for life in general...) lists the required repairs in order, so you can work through them methodically.

Digging into the data was, for a long‑time Sibelius user like me, completely intuitive, whether it’s selecting notes and changing their duration, articulation and beaming via the keypad, or dragging them up and down in pitch. New notes may be inserted from scratch and there’s support for four voices per stave. You can also add and edit standard and repeat barlines, clefs, chord diagrams (for standard guitar tuning), slurs, hairpins, rehearsal marks, many kinds of symbol, key signatures, time signatures, tuplets and text including lyrics and titles. Staves or entire scores can be intelligently transposed by up to two octaves in either direction, and there’s support for typical orchestral transposing scores with instruments offset in key and pitch. A Rescore feature lets you alter some layout aspects, reorder staves or generate individual parts. You can directly print and generate PDFs too, so PhotoScore covers a lot of the same ground as dedicated engraving applications.

It’ll also play your scores, using a basic General MIDI‑like soundset that gets its instrumentation cues from stave names. Some global settings can introduce swing and various sorts of dynamic and tempo shaping under an ‘Espressivo’ scheme (which is shared with Sibelius). There’s also a simple configurable reverb. But no mixer or anything but the most rudimentary transport controls.

Finally, a PhotoScore‑analysed page can be saved in its own right, to continue editing it at a later point, or for archival purposes. But assuming you’ve expunged all errors, the only thing left to do now is use the ‘Send to Sibelius’ or ‘Save MusicXML’ buttons, or go via the Save menu to output a NIFF or MIDI file.

As many of us will know from conversing with our phones’ personal assistants, when AI works well it’s a wonderful thing. And when it doesn’t the results vary between hilarious and catastrophic. 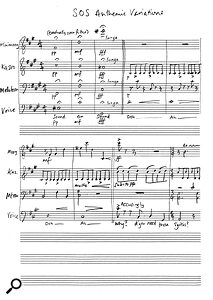 The original and resulting notation output from scanning my exciting new magnum opus in Handwritten mode. Clearly, scores of this complexity are beyond the scope of the system. Some may argue that PhotoScore’s rendition is an improvement in this case however... 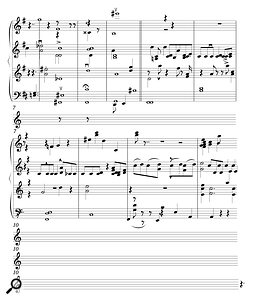 It’s a similar situation with PhotoScore. With a good scan of a modern, clean printed score, the results can be phenomenally good. Many scans I made — of piano music, orchestral scores, songs and lead sheets — were analysed flawlessly, with no mistakes to correct. They included some complex writing too and included lyrics and titles. Handling of pickup/anacrusis bars and incomplete bars around repeat marks is often beautifully done, with hidden time‑signatures. It’s no exaggeration to say that hours or days of data entry could be saved in a few whirrs of the scanner.

Often, there would be a handful of errors per page. No big problem: still a massive win for PhotoScore compared to entering the data from scratch. Many high‑quality phone camera scans, or direct downloads from score websites like IMSLP.org, also worked well.

However, some complex notation and (particularly) poorer originals will see your success rate go off a cliff, and for those the ‘read’ output might bear only a distant, chaotic relationship to the input. With some the repair job seemed likely to take longer than building the score from scratch in another application.

All the foregoing holds true for Printed score reading. For Handwritten mode, which takes perhaps four times as long to scan each page, the lottery odds are longer. In order to stand a fighting chance of adapting to every Johann, Wolfgang or Ludwig’s handwriting style, PhotoScore hugely cuts down on the range of notation it’ll attempt to interpret: only notes and rests on five‑line staves, key signatures, slurs and ties, barlines, and basic page layout in terms of where systems begin and end. Even clefs and time‑signatures are ignored, though the software attempts to derive them from the broader context.

All my tests with Handwritten mode were hit and miss. Ultra‑basic stuff — one or two staves, a few bars, simple rhythms, really neat handwriting — could be made to work. But most ‘real world’ scores were a lost cause, because of terribly inaccurate pitch and rhythm recognition on the one hand and unsupported notation types being rendered as nonsense on the other. Long story short: keep your expectations very modest.

Optical character recognition for music is undoubtedly a tricky business, and that makes PhotoScore & NotateMe Ultimate’s on‑song capabilities all the more impressive.

Optical character recognition for music is undoubtedly a tricky business, and that makes PhotoScore & NotateMe Ultimate’s on‑song capabilities all the more impressive. For music educators, singers, arrangers or ensemble leaders needing to quickly transpose or repurpose existing printed material this application could be revelatory, saving you hours of effort. A pairing with Sibelius is an ideal combination but isn’t required, and the software plays well with most other notation applications and DAWs.

It does feel a bit Spartan and old‑fashioned in some ways. Aspects of the interface are clunky and unintuitive, and it’s not exactly pretty in use. Also don’t expect instant gratification: reading the manual (itself due a spruce‑up, I’d respectfully suggest) and learning a few of the software’s ‘little ways’ is essential for a happy life. As for the dozen or so crashes I saw while testing, many were associated with importing large PDFs, so there may be some external factors at play there: for most jobs it seemed stable.

It’s a specialist tool, but for one that is as potentially powerful as it is time‑saving I’ll forgive some eccentricities. If you need this sort of music OCR there’s not that much else out there, and PhotoScore & NotateMe Ultimate 2020 is unquestionably one of the main players.

PhotoScore & NotateMe Ultimate 2020 is a pairing of what used to be two separate applications. PhotoScore is the scanning and data extraction bit. NotateMe is an interface for live handwritten music entry using a touchscreen or stylus‑driven interface (like a Microsoft Surface), and has counterparts in iOS and Android.

There’s very little overlap of functionality between the two different sides of the application, and I’ll stick my neck out and say that NotateMe is not the main event here: most pro‑level users will have long ago embraced, gratefully, much faster data‑entry techniques.

PhotoScore’s roots go right back to the early 1990s and the Acorn ARM platform, which was what Sibelius also ran on at that time. As Acorn mulched into the forest floor both PhotoScore and Sibelius migrated to Mac and Windows but a close relationship remained, and to this day Sibelius can open PhotoScore’s file format natively. Many purchasers of Sibelius over the years may have had PhotoScore Lite bundled, but compared to Ultimate it lacks crucial capabilities and is limited to handling only small scores.

ScanScore Professional 2 comes in at $179. There’s no handwritten mode, and output is MusicXML or MIDI only, but file‑handling and playback/mixing is more modern, accuracy looks very promising, and there’s a nice tie‑in to a free iOS/Android camera capture app that does away with the need for a flatbed scanner. On iOS try the remarkably swift, self‑contained PlayScore 2: with a Pro‑tier subscription pricing of £4.99$5.99/month or £22.49$22.99/year it can create accurate, data‑rich, MusicXML output.

An at‑times magical ability to turn printed music into live computer notation and MIDI data, though it’s far from infallible. There’s room for improvement in the interface too.