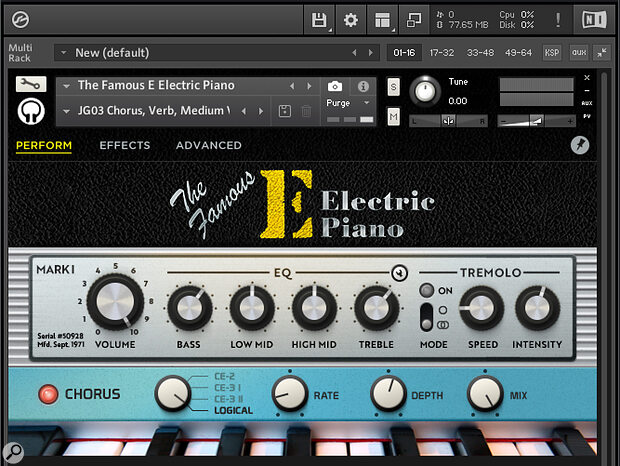 Orange Tree Sample’s Famous E may be the best virtual Rhodes you can buy.

The development history of the Rhodes electric piano would be an apt subject for Mastermind, I reckon: there was a surprising number of different models, variants and modifications available over its roughly two decades of production. Most players though would be happy with one really stand‑out, good‑sounding, responsive, versatile instrument, and that’s what this sample library aims to deliver.

Although Orange Tree Samples is deliberately cagey about the exact make and model of the piano sampled for this library, for legal reasons, the inclusion of both a ‘MARK I’ label and a serial number in the graphical interface makes it easy to identify as a 1971 Fender Rhodes MkI Suitcase. And not just any old MkI. This one apparently acquired a reputation as a ‘holy grail’ example, at a time when Rhodes were essentially hand‑made, and could vary considerably fresh off the production line. The ‘E’ — so called because of an identifying letter E stencilled on it by the LA hire company that bought it — ended up being booked up months ahead of time for any 1970s studio session in the city that needed a Rhodes. Add in the involvement of the celebrated producer, guitarist and songwriter Jay Graydon, who worked on many of those sessions, experimented with ways to record the ‘E’, and who has been very closely associated with the development of this library, and you’ve suddenly got a heck of a provenance.

Basic specs and requirements are quickly summed up. The library runs in Native Instruments Kontakt and Kontakt Player 5.7.0 or later, on Windows and Mac OS, and it’s a 3.7GB download that represents 7.4GB of samples. Almost all of the original 73‑note range is separately multi‑sampled with 18 velocity layers and, helpfully, the overall pitch compass has been extended to cover the A1 to C7 range that 88‑note controllers use. I saw typical RAM usage around 75MB, which is very manageable, and it’s light on the CPU.

The Famous E’s user interface presents three tabbed sections (shown above). The first, Perform, has a volume knob, four‑band EQ, Tremolo and a multimode Chorus. Many more effects are available to be instantiated in processing chains in the Effects tab, which offers digital and analogue flavours of EQ, algorithmic and convolution reverbs, another chorus along with a phaser and versatile delay, plus a compressor and simple gain compensator. 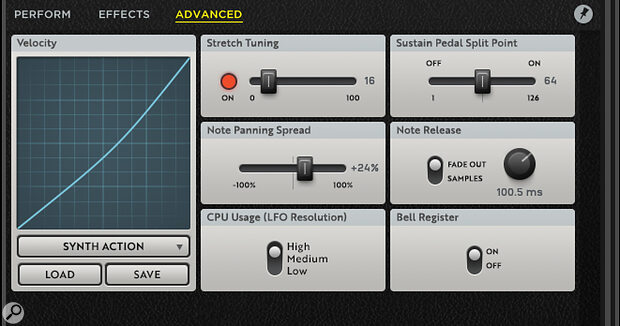 Finally, an Advanced tab offers various niceties including velocity curve modifications (and storage) and left‑to‑right panning spread (totally inauthentic, but possibly helpful for stereo ‘loosening’ and for layering with acoustic pianos recorded that way). There’s also a toggle for a distinctive tinkly ‘Bell Register’ tone that’s present on the source instrument in the treble pitch range B3 to G4. Settings on any or all of the three section pages can be ‘pinned’ so they don’t change between presets, which is a nice feature. And the apparently basic four‑band EQ is quite tweakable, too, via a hidden parameter panel.

Getting down to playing the library soon reveals what all the fuss is about: simply put, this is a glorious‑sounding electric piano. The character is bright, generous and open, with a treble that sings out, even when playing quietly, and a low tenor register with that tremendous fibrous, complex, sustaining presence that’s somehow the epitome of the Rhodes sound. Individual notes have masses of life within them, which makes for a remarkable feeling of responsiveness and involvement.

Getting down to playing the library soon reveals what all the fuss is about: simply put, this is a glorious‑sounding electric piano.

Dynamic response is also top class. There’s no discernible velocity switching, and while gentle playing retains plenty of presence and warmth, more energetic efforts naturally brighten and saturate without any harshness of tone or unwanted mechanical noise. This is not a Rhodes that ‘barks’ the same way some do, it’s worth pointing out, but its tone can of course be roughened as much as you like by running it through an amp/speaker simulator or distortion. Interestingly, too, the starting‑point balance of tone is somewhat bass‑light. But that helps avoid the murkiness that plagues lesser examples, and the sound takes the on‑board EQ in a natural way, to provide plenty of low‑end oomph when required.

The effects are all useful, but those on the main Perform page, the Tremolo and Chorus, are particularly sophisticated. They use a custom DSP approach that relies on scripting features rather than Kontakt’s built‑in DSP routines. As a result the tremolo is more uneven and somehow organic (in an old‑school electronics sort of way) than what could be achieved with your typical synth LFO, and the choruses are notably warm and liquid. These are inspired by different modes of two Boss pedals, and complement a more synthetic and sparkly digital alternative. A quirk of the Kontakt programming is that effect parameter tweaks or mode changes don’t kick in until all sounding notes have been released, which can cause confusion if you’re trying to dial your tone as you play. In practice it’s not a serious limitation, and the behaviour is apparently already improved in a forthcoming update which will also add on‑board amp and speaker modelling.

There are of course other sampled and modelled Rhodes out there, and for some perspective I loaded a few leading contenders alongside. All subjective of course, but for me the best modelled competition offered similar responsiveness but couldn’t match the timbral complexity. Meanwhile, none of the multisampled alternatives had such an immediately attractive and vivacious character, despite various strengths of their own.

So what we have here may just be a single MkI, but it’s a spectacularly good one: it seems all that hype about the original ‘E’ is justified! Vibey, responsive, sophisticated and effortlessly inspiring, this is a great electric piano library.

One of the best, if not the best, sampled Rhodes pianos currently available.