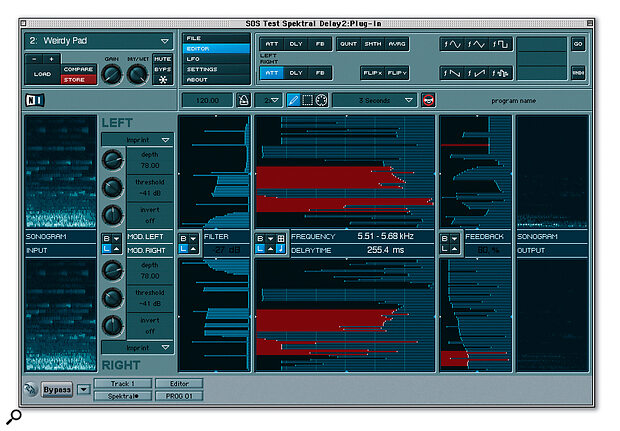 Paul White explores the dark side of effects processing with this innovative software from Native Instruments.

Most software plug‑ins fall into categories that are comfortably straightforward to define, but that's not true for NI's Spektral Delay — unless 'weird' happens to be one of your categories! To put it extremely simply, the program uses Fourier mathematics to split standard time‑domain mono or stereo audio into up to 1024 frequency bands, which it can then process and delay in various ways before recombining them. Despite its mathematical complexity, the user interface is fairly intuitive and largely graphically controlled, though the correlation between the user's intuition and the audible end result is often pretty loose!

Available for both Mac and PC platforms, Spektral Delay can either operate in stand‑alone mode or work as a DirectX or VST plug‑in. Either way, it needs a fairly frisky computer to run: PC users should use at least a Pentium II, while Mac users should use a 300MHz G3 or faster. Those wishing to use Spektral Delay as a stand‑alone processor will find ASIO drivers included, though to make use of the program's real‑time MIDI control facilities on a Mac, you'll need to install the application that dare not speak its name (oh, all right, it's OMS) or MOTU's FreeMIDI. Installation is directly from a copy‑proof CD‑ROM, and the copy protection works by asking to 'see' the master disc on occasions.

On opening Spektral Delay, you'll see upper and lower windows corresponding to the left and right signal channels, along with a small modulation section, three graphical editing windows and spectrogram displays of both the inputs and outputs.There are, in fact, four separate processing stages, comprising Modulation, Attenuation, Delay and Feedback. The input signal is first analysed into its frequency‑domain components, whereupon it negotiates each of the processing sections in turn, and anything that survives is turned back into 'normal' audio at the output. The processing sections in the two channels can be linked or set up independently, and up to three key parameters at a time may be modulated by means of an onboard, multi‑waveform LFO. There's also an Editor panel, which allows you to perform certain functions on the six edit matrices (graphical windows) by simply selecting the one you want to change, then pressing the button corresponding to the transformation you wish to inflict upon it. For example, settings can be flipped vertically or horizontally, drawn values can be smoothed, averaged or quantised, or the drawn patterns can be modified (by percentage) using waveform function generators.

At the input, the analysis section breaks the audio into very short sections or frames, each of which is analysed and then represented by amplitude and phase values for each frequency band. The user can choose the number of frequency bands from a selection ranging from 64 to 1024. It's possible to make various changes to the way the signal is analysed and resynthesized, but the factory defaults are fine until you get a little more familiar with what's going on. In the plug‑in version, audio tracks are treated directly, while for stand‑alone use the software needs either a live input or an audio file to chew on.

The first level of processing is the Input Modulation stage. Like all the other stages, it has its own bypass button and can be linked to the adjacent channel if required. The other common feature is a pair of up/down arrows, which allow settings in the upper window to be copied to the lower window or vice versa. Further controls in the master section enable the settings to be inverted. The Modulation effects are definitely not of the ordinary chorus/vibrato/flange flavour. They are all preset frequency‑domain treatments with a maximum of three user‑adjustable controls per channel, which may be left fixed or set to vary under control of the master LFO. The treatments on offer are:

The results of these processes vary from strange flanging and comb‑filtering effects to treatments resembling granular synthesis, so when you first use Spektral Delay, it's probably a good idea to bypass all the other stages and just experiment with these for a while.

Next up is the Attenuation Matrix, which essentially provides level controls for each frequency band — like a really big graphic equaliser. Clearly, changing up to 1024 bands one at a time would be crazy, so in common with the other windows, there's a pencil drawing tool that lets you sketch in curves and spikes very quickly. The display looks like a graphic equaliser tipped over on its side, and using the keyboard modifier keys, different drawing tools are called up. Now, even a 1024‑band graphic equaliser doesn't guarantee fun, but the LFO modulation facility allows either the levels and/or frequencies of the bands to be modulated, creating some very dynamic filtering effects. Placing the mouse pointer anywhere in the window displays the attenuation amount and the frequency at the current position. If the two channel windows are linked when drawing takes place, the same shape is drawn into both windows, but it's also possible to draw different shapes into both windows, then link the channels afterwards so that both are modulated by one LFO even though they are set differently. Conversely, you can set different modulation options for the two channels, within the limitation that Spektral Delay's LFO can only modulate three destinations at a time.

Another feature common to both channels and to all three graphical processing sections is that a lasso tool can be used to select a section (or several sections if you use the Shift key) of the spectrum, which can be modulated while the rest is left static.

So, the Modulator has chewed up your signal, the Attenuator is applying either fixed or moving filtering — now what? Next comes the section that gives the program its name: the Delay Matrix. Here, the graphical interface lets you draw in separate delay amounts for each frequency band. The maximum delay time depends on your computer and how much RAM you have, but 3 seconds is typical, with 12 seconds being a maximum. There's a quantisation grid (with variable note value) that can be switched on to create tempo‑related delays, and the tempo may either be adjusted manually or sync'ed to the host application if it is fully VST 2 compliant. Discrete steps produce interesting spectral echoes, whereas curves or other non‑rectangular, non‑quantised shapes tend to really mix up the delayed signal, turning entire audio tracks into bells, ambient beds or swirling pads. Again, the LFO can be used to modulate either the delay time and/or the frequency band values.

Finally comes the Feedback editor, which works with the Delay Matrix to provide adjustable feedback levels for the various frequency bands. The closer you draw to the right‑hand side of the window, the more feedback is introduced to that frequency band, and yes, you can modulate the feedback depth and/or the frequency band values. With everything being modulated, the screen can end up looking like the jaws of a demonic car crusher, which is quite appropriate given what's being done to your audio!

Ear Of The Beholder

I had no trouble finding my way around the program, though I was stumped at one point by the program's tendency to lock up Logic Audio if I tried to use it following a virtual instrument in the signal chain. This is apparently a Logic foible that may able to be sorted out in a future version. In any event, it's most likely that the program would be used to treat an audio track, and this caused no problem provided I gave Logic Audio a little extra memory. I also tried Spektral Delay with TC's Spark XL 2.0, and it worked fine.

Spektral Delay is extremely versatile, and used subtly, it can create wonderfully ethereal washes out of just about anything you feed into it. At the same time, rhythm loops can be treated by quantising the delay processing so as to get the effects to reinforce the original rhythm — a great way to 'repurpose' old loops. Some of the more extreme effects can turn drum loops into ethnic bells or conventional musical instruments into granular chaos, and voices can be made to sound very electronic and robotic. The effects often have a resynthesized quality to them, which adds just the right atmosphere for trance‑style music, sci‑fi soundtracks and atmosphere beds. In fact the musical applications are enormous and the great thing about Spektral Delay is that it makes anything you feed into it sound a lot more complex than it really is.

Though it doesn't take very long to find out roughly what type of setting produces what kind of effect, a lot can still be discovered by trial and error. The LFO is the key to the dynamic nature of the effects, and to this end, having more than one LFO feeding more destinations might have been useful, though I suspect the designers were conscious of the amount of processing power needed. However, I would have liked to be able to sync the LFO to a multiple of the tempo, which doesn't seem possible at the moment.

I have a weakness for weird effects, so it should come as no surprise that I like Spektral Delay very much. Despite its internal complexity, it doesn't take long to become well enough acquainted with the program to start creating your own effects, and to start the ball rolling, there are a number of factory presets that show off the versatility of this package. If you're growing tired of the usual chorus/echo/flange/pitch‑shift/reverb stable of effects, Spektral Delay will delight you with its capacity for strange beauty. Go on, you know you want to!

Among Spektral Delay's many other features, it's worth mentioning the 'MIDI plug' icon which can be used to dynamically automate effects. When it is moved, MIDI controller data is transmitted so that it can be recorded to recreate the same performance later. If the output ever gets too chaotic, a single button‑press will purge the delay buffer, and of course there's a global bypass alongside the gain and wet/dry mix knobs.

Yet another neat feature is a Freeze button (cunningly disguised as a snowflake) which mutes the input signal and feeds 100 percent of the delay signal back into the Delay Matrix so that the memory contents loop indefinitely. This is very useful for creating long textural washes.

Setup snapshots can be stored as you go along, and if you're using Spektral Delay as a VST Instrument, these are transferred to your sequencer Song so that they are automatically recalled when you reopen the song. Up to 64 presets can be stored in the host application depending on its capacity. In addition to the presets system, it's also possible to save patches conventionally to disk, where they are stored as programs and banks. An integral Bank Browser shows 16 patches at a time, while buttons A, B, C and D flip through four sets of 16 patches. Patches may be freely copied from disk to the active memory using the Store button in the global control panel, making it easy to construct custom banks of effects.

Spektral Delay is fun to use and capable of producing some extremely interesting and unusual effects. It won't suit all musical styles, but anything with an experimental edge to it could benefit enormously.