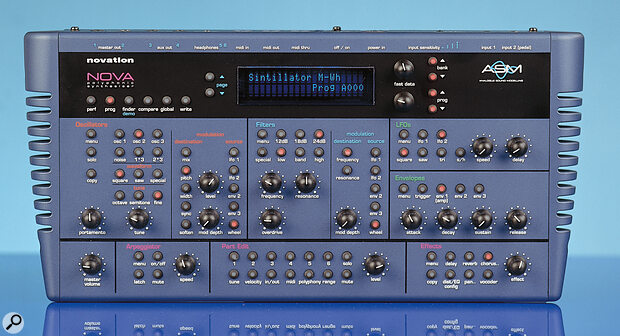 In these days of flash‑upgradeable operating systems, it's easy to forget that a free OS tweak can give your synth completely new features. Paul Nagle investigates Novation's newly enhanced Nova module...

It's not often that a review starts with a thud, but then it's not often that a courier delivers at 6:45 on a Saturday morning either. The thud turned out to be the sound that a boxed Novation Nova makes as it is dropped over a six‑foot gate and onto my garden path. Fortunately, the Nova's sturdy construction and first‑class packaging saved the day — no thanks to the couriers...

As the Nova was reviewed comprehensively in SOS September 1999, I've focused my attention in this review on the features added in the new operating system update, which takes it to version 4.0. This update is free, it's installed via a standard MIDI file and any existing Nova owners who haven't heard about it should grab it from Novation's web site right away.

The Novation Nova was initially regarded as a slimmed‑down version of the virtual analogue Supernova, although it did have two audio inputs to process signals through its filters and effects, and not even the top‑of‑the‑range Supernova had those at the time, although the recent upgraded Supernova II has done away with that advantage. The desktop design of the Nova and its external power supply resulted in a very slim, chic‑looking module which nevertheless concealed an impressive multitimbral synth engine. Novation have set the standard for multitimbrality in the virtual analogue synth world — not by offering more parts than any other manufacturer, but by offering truly multitimbral effects. In other words, in multitimbral Performance mode, each synth Part retains the effects it has been assigned in Program (single‑sound) mode. To make better use of this, Nova owners must have been yearning for more than the synth's original 12‑note polyphony... so the news that the OS upgrade boosts the Nova's polyphony to 16 notes will be most welcome. Consider for a moment how cool this is — it's something that could never happen with a genuine analogue synthesizer without some major (and expensive) surgery, and yet, almost two years after we first reviewed the Nova, four more voices have materialised out of thin air (well, a thin MIDI updater file, anyway).

I found plenty of other surprises in store, too. Remember those 'Special' buttons that seemed less than thrilling in the past? They now allow access to several important new features — the most significant of which are a new 'Doublesaw' waveform and nine extra filter types.

The Doublesaw waveform cleverly simulates two detunable sawtooth waves, and if you set all three oscillators to use it, the super‑thick result does indeed sound like six. You'll probably never need to reach for the new Unison settings (where between two and eight voices can be assigned to each note)‑‑ although you can if you want to! Pushing the Width button in the Oscillator Modulation section allows you to use the knobs to set the difference in phase and tuning of the 'two' virtual sawtooth waves, or even detune them using an LFO for some lush string textures.

Having a new sound source is great, but to further enrich your sound palette, no less than nine new filter types have crept under that Special button in the filter section: resonant low‑pass, resonant high‑pass, resonant band‑pass, notch, low‑pass plus low‑pass, band‑pass plus band‑pass, high‑pass plus high‑pass, low‑pass plus low‑pass, and band‑pass plus high‑pass. While these don't include every combination you might think of (I'd have liked a low‑ plus high‑pass pairing), they provide enough scope. The first three in the list, the so‑called 'Hyper‑resonant' filters, work as two filters in series with a separate Width parameter, so that each filter block can be set to different frequencies. They sound very similar to the original filters, until you play with the Width or crank up the resonance (at which point there's an increased 'fizz' — welcome but not too radical).

The notch filter behaves as you'd expect, and the remaining dual filters work in parallel, the Width parameter again providing an offset of cutoff frequencies. Carefully adjusting the Cutoff and Width knobs can create vocal‑like formant textures or an impressive array of sharp, nasal sweeps. The Width parameter is calibrated in preset intervals, but if you wish, you can modulate it freely in the Filter Mod section. Of course, you can't see a destination button for it, because these special filters have only just become available with this upgrade; instead, you use the resonance modulation destination instead. There had to be some kind of compromise for these filters, and I think Novation made the right choice.

One of the cons from the original SOS review was that there was no 'knob pickup' mode (no giggling, please). This is a feature present in an increasing number of modern synths with patch memories as well as physical control knobs. Basically, when you recall a stored patch, and the physical positions of the top‑panel controls no longer match the stored parameters, the Nova will make no change to a parameter until you move its control past the stored value in the new patch. This prevents sudden glitches when you select a patch and start tweaking.

I could go on about OS v4's other improvements, such as the new delay ratios, or VCO/DCO mode, which introduces random, analogue‑style variations in pitch, but in all, they're pretty straightforward. You'll find concise notes on them in the box below.

This review is not a reappraisal of the Nova itself. Instead, it concentrates on the extra features which Novation have coaxed from the existing DSP. Therefore my pros and cons are based on this, rather than on the instrument as a whole. However you wouldn't expect me to leave without offering some kind of overall impression, would you?

Although sometimes I wished for just a few more knobs and more choice in terms of modulation options, generally I found this synth a doddle to use; its menu system is straightforward, with only a few idiosyncrasies that I soon adapted to.

Soundwise, I found the Nova to have a rather 'all‑purpose' character. Other virtual analogues, such as the Waldorf Q, Clavia Nord Lead and Access Virus, have their own very distinctive timbres, but I feel that Novation have produced something far more generic, applicable to almost any situation where you would want analogue‑style sounds. Time and again I hear words such as 'smooth', 'warm' and 'rounded' used to describe Novation's sounds, and I can't really disagree with any of these. However, perhaps that's also why I personally haven't found that special something that grabs me and makes me reach for my credit card.

Having had the Nova here for a while, I can attest that it sounds as full and rich as the best of the virtuals, especially with the Doublesaw waveform. And it can also cut it with some powerful leads — its Oscillator Sync is especially impressive. In fact, all the new features plus existing gems such as the arpeggiator and carefully‑considered multitimbral design makes the Nova one of the most flexible virtual analogues. If you don't yet own a Nova but were considering one, the new additions might just tip the balance.

As this review was going to press, I received another update to the Nova OS, this time v4.1 (the version, incidentally, that should be shipping with the synth by the time you read this). The update is minor in the extreme, adding just one feature, 'Vocoder Freeze', which works in multitimbral Performance mode only. It allows a sustain pedal connected to audio input 2 to capture an instant picture of the frequency characteristics of a Modulator signal from audio input 1, and superimpose them on the Carrier. An example Performance (A119) is included in the latest soundset — you need to set the sustain pedal to 'voc freeze' for it to work.

An updated manual for the extra OS4 features is available from Novation's web site.

This new operating system breathes extra life into an already impressive module. It will be invaluable for existing Nova owners and an extra sweetener for those as yet undecided.