If you thought you couldn't afford audio test equipment, then think again! Hugh Robjohns finds out if NTI's Minstruments measure up.

Audio test equipment is usually one of those luxuries that only professionals can justify. For the majority of recording musicians, the best testing and calibration tools available to them are an approximation of a sine wave from their synth and the readings from their console meters. However, Neutrik Test Instruments (originally part of the well‑known connector manufacturer, but now a separate company) have produced some very neat and surprisingly affordable hand‑held miniature test instruments, the Minstruments series. These currently comprise the MR1 Minirator signal generator, the ML1 Minilyser signal analyser and the MiniSPL, a calibrated measurement microphone designed for use with the ML1. There is news of a DL1 Digilyser digital audio analyser on the way, but this isn't yet available at the time of writing. 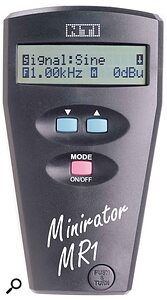 The Minirator can produce any of a range of sine waves between 20Hz and 20kHz (in 31 third‑octave steps), any of a range of square waves between 20Hz to 5kHz (in 25 steps), or a stepped sweep of sine waves from 20Hz to 20kHz (with adjustable step times from 0.05 to 5S) with an identifying 1kHz tone before each sweep. The unit also generates white and pink noise, as well as a polarity test signal of the impulse type which is used in conjunction with the Minilyser. Output level can be set anywhere between ‑76Bu and +6dBu in 2dB steps (accurate to 0.5dB) and the unit set to display levels as dBu, dBV or RMS voltage.

There are two outputs: an unbalanced option on a phono connector at the top of the unit, and a balanced option on a three‑pin XLR at the base, which folds very neatly into the body of the unit. The unit is powered by a pair of AA cells giving around 20 hours of continuous life, and the machine can be configured to power down automatically after three, 10, 30, or 60 minutes. 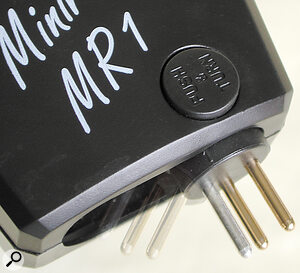 Driving the machine is very intuitive, with the only controls being a Mode button and a pair of cursor keys. There are two control screens, the first of which selects the output signal type, frequency and level, while the second sets the power‑down mode, the level display units and the sweep frequency step time. The Mode key is used to cycle around the various functions and the cursor keys adjust their values. Holding the Mode key depressed for about two seconds switches the power on or off.

The Minilyser is physically similar to the Minirator, but slightly larger and more complex. The front panel boasts a set of four cursor keys with a central Enter button, and both Escape and Power buttons. Three inputs are provided: analogue audio on a balanced XLR and an unbalanced phono connector, plus an internal microphone (used only for checking the polarity of loudspeakers). There is also a monitor output on a 3.5mm jack, with a built in compressor circuit to ensure near‑constant monitoring volume. 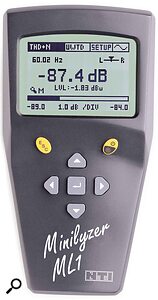 Powered by three AA cells, the unit should operate continuously for around 16 hours, though this will depend on the mode in which the LCD screen's backlight is operating. The backlighting can be disabled or can be configured to come on for three, 10 or 60 seconds whenever the power button is pressed, and the LCD contrast can be adjusted over a wide range. Automatic power‑down facilities, similar to those of the Minirator, are also provided. Four memories allow the user to store useful sets of configuration settings.

The Minilyser offers level measurement, Total Harmonic Distortion (THD) + Noise readings, VU and PPM metering, frequency detection, polarity testing, signal balancing error assessment, sweep frequency response display, third‑octave spectrum analysis, and an oscilloscope. Each selected function is portrayed on the large LCD with both numeric and graphical displays. In many of the modes there are several weighting factors available — including A and C weighting; 22Hz, 60Hz and 400Hz high‑pass filtering; and a voice band‑pass option — as well as fast, slow and impulse time averaging.

Level measurements can be made in dBu, dBV or voltage, the latter either as an absolute figure, or relative to a previously established reference (in terms of dBr, percentage, or scaling factors). The VU and PPM scales can be configured for any appropriate reference and ballistics, while the distortion and noise test can be expressed in decibels or as percentages. The balanced interface 'balance error' can be given as a percentage or as a scaling factor.

The sweep mode can create a standard frequency reponse graph or graphs of level, THD + Noise or frequency against time. In the case of the frequency response mode, the unit is armed and then starts recording and displaying the graph when it detects a 1kHz or 315Hz reference signal. The graphs against time are operated manually, with the user having to input a recording period and the time between each sample. The third‑octave analyser display is exactly as you would expect, with options to adjust the averaging time, and the scope display provides a very rough‑and‑ready approximation of the signal shape. To make life easy, the timebase and amplitude are set automatically. The polarity test, when used with the appropriate MR1 output, provides a simple 'positive' or 'negative' response, when measured either through the XLR or phono input or via the internal microphone.

MiniSPL mic.The MiniSPL option wasn't provided for review, but consists of a calibrated omnidirectional electret microphone which simply plugs into the XLR socket on the Minilyser allowing it to perform a range of acoustic measurements. These include instantaneous, maximum or minimum sound pressure levels, equivalent continuous SPL (used in noise at work assessments), and spectrum analysis of speaker systems.

All in all, these units are excellent. They are extremely easy to use, well‑equipped, reasonably accurate, and relatively affordable. The only negative comment I could make is that, although a headphone output is provided, an internal loudspeaker in the Minilyser would have made life easier when a simple aural check was required. Although not intended as laboratory tools for precise equipment alignment, these NTI units will be ideal for many general‑purpose applications and will therefore be highly appealing to a lot of musicians who previously considered test equipment beyond their budgets.

Cost‑effective, portable, fast and simple signal generator and analyser tools. Effective when used together, but also useful as stand‑alone units.