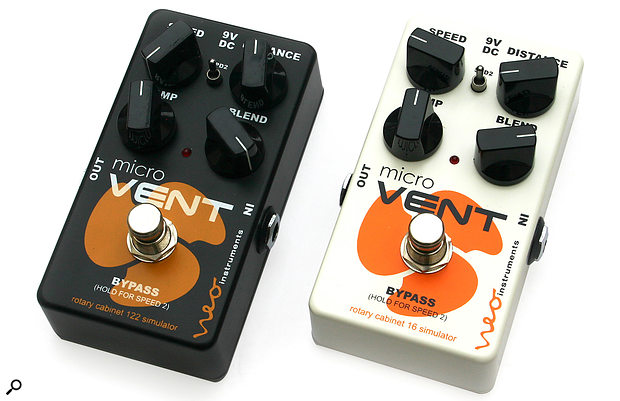 Neo make some of the finest stereo rotary-speaker emulation pedals available, and for the benefit of those with a more monophonic existence, they've taken their core Ventilator technology (SOS November 2014: https://sosm.ag/neo-ventilatorii-minivent) and put it into a standard-sized stompbox format, to create the Micro Vent 122 and the Micro Vent 16. Each pedal can be powered from a standard 9V PSU providing 180mA or higher, making these effects pedalboard friendly.

Although the two pedals have the same control sets, they're based on different voicing algorithms. The black Micro Vent 122 simulates a Leslie 122, while the white Micro Vent 16 simulates the Fender Vibratone, also known as the Leslie Model 16. Both have a 0.5MΩ input impedance, making them equally suitable for guitar and keyboards, and the bypass mode can be set as buffered or true bypass. The same SHARC DSP is used as in the company's Ventilator II, with 24-bit, 48kHz conversion at the input. Neo have also added an analogue wet/dry Blend knob alongside the Speed, Ramp and mic Distance knobs, though the growly amp distortion of their previous pedals appears to be absent. But while these pedals have a reduced feature set compared with the company's flagship models, the conversion and effects quality have not been watered down.

The Micro Vent 122 algorithm simulates a setup using one mic on the horn and another for the drum rotor, the virtual distance of both mics being controlled by the Distance knob. The Micro Vent 16 replicates the single, side-mounted 10‑inch speaker and drum rotor of the Fender Vibratone, and again, the mic distance from the cabinet is variable. Some functions are less obvious, and it's well worth exploring the Ramp, Speed and Blend knobs, as these have alternative functions. As delivered, the single footswitch operates as a bypass when pressed briefly, but when pressed and held for 1.5 seconds it can switch between two speeds, at the rate set using the Ramp knob.

Speed 1, controlled using the Speed pot, can be set anywhere from very slow to fast. When the pedal is taken out of bypass, the modulation runs at the selected speed. Speed 2 is set using a small three-way toggle switch labelled SPD2, whose positions access the standard rotary speeds of Slow, Fast and Stop. When changing speeds (press and hold the footswitch) Speed 1 changes to whichever speed option is selected using the switch, so the most obvious setting would be to set Speed 1 fairly slow and then have Speed 2 set to Fast.

Customisation of the footswitch and other functions is possible in Global settings mode, which is engaged by powering up with the footswitch held down. In this mode, the Ramp knob is used to select the bypass mode, and the Speed knob's position selects from five options. First is the factory setting, which brings in Speed 2 once the switch is held down, and stays on Speed 2 until the switch is released. Next is a mode that allows the switch to latch, so that you don't have to keep pressing your foot down to stay on Speed 2. The third option flips the switch operation, so that momentary presses change speed and a 1.5s hold-down is required to bypass the effect (sensibly, re-engaging it is instantaneous). Mode four uses the footswitch only to change speed — bypass is not available and Speed 2 pertains only as long as the switch is held down. The last mode again dispenses with the bypass option, but it allows the switch action to be made momentary for speed changes. Those last two 'no bypass' modes are useful if you have your pedal connected to a switcher, or if you're using it with an organ sound and only need the slow and fast options. Blend acts as an output-level trim in setup mode. Once set, pressing and holding the footswitch for a few seconds will save your setup changes.

Sonically, the Micro Vent 122 sounds much like the Mini Vent (my review of which you'll find at the link given earlier) but without the stereo output or the amplifier grind. The speed–change inertia sounds wonderfully evocative: used with guitar, you can get all those George Harrison and David Gilmour rotary sounds, with the added benefit that setting the speed very slow and mixing in a bit of dry sound provides a much more pleasing alternative to phasing. All in all, it produces a very believable Leslie sound. If you have the option of running a stereo rig, the Mini Vent would still be my preference, but if not, this mono version could make a lot of sense: it will save you both money and pedalboard space, but it still sounds fantastic following an organ emulation pedal such as the Electro-Harmonix B9.

Compared with the Micro Vent 122, the Micro Vent 16 is a more subtle proposition, since you don't get the interaction of separate high and low rotors. But while it sounds less complex and dominant — almost like chorus meets tremolo meets vibrato — it's no less musically useful, as it delivers the required texture without getting in your way, especially if you mix in some of the dry sound. Compared with recordings of the real thing, the Vent 16 gets incredibly close. It suits both rhythm work and solos, producing a different result depending on whether you put it before or after your overdrive pedal. Just like the real thing, it can be used subtly, in which role it provides a less clichéd alternative to a chorus effect.

Both pedals do a fantastic job of emulating the originals, and even though they are mono they sound spacious and dynamic. Having the option to change the footswitch function is very convenient. For my money and tastes, the Vent 122 is the one to go for — but if you're a fan of the Vibratone, then the Vent 16 will deliver what you need.