So many Leslie speaker emulators are mere approximations. Could authenticity lurk in these tiny boxes?

Second-hand Leslie speakers can be cheaper than a stompbox, but they’re large, heavy and often unreliable. You also have to mic them. Given the inconvenience, there’s a real appetite for convincing emulations. Unfortunately, most attempts to date don’t sound completely authentic.

Recreating the sound of a Leslie speaker is not trivial, as there are so many interacting acoustic, mechanical and electronic elements. The sound is created via a rotating drum reflector for the bass end and a rotating horn fed from a static tweeter (counterbalanced by a dummy horn) for the highs. The two frequency ranges are split via an 800Hz crossover, and the amps make their own sonic contribution, especially when overdriven. The design of these transducers and their baffle systems imparts a sonic signature, as does the enclosure, and the motion adds Doppler pitch modulation. The tonality and amplitude also change as the drum or horn aperture moves away from the listener’s axis, and internal cabinet reflections add further complexity. The two motors plus brakes allow the high and low rotors to run at different speeds, rotate in opposite directions, and, when switching from slow to fast or applying the brakes, change speed at different rates. There’s also the position of the mics to consider: the closer the mics, the more pronounced the stereo effect and less roomy the sound. 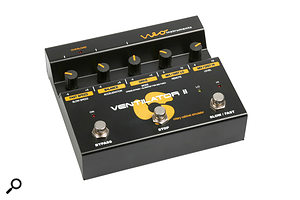 Guido Kirsch, designer of the Access Virus synth, decided to model this complexity, as he was dissatisfied with the available Leslie emulations. After considerable research and development, he created the Ventilator, reviewed in SOS December 2011 (http://sosm.ag/neo-ventillator). The II version, reviewed here, features updated guitar-mode voicing and smoother modulation in the close-mic positions, and is joined by a more compact, simpler to use and less costly version, the Mini Vent.

The Mini comes in two versions, one tailored for guitar, the other for organ. The hardware is basically the same and both feature 48kHz 24-bit conversion, but some of the preset parameters and edit options are slightly different. The small but solid stompbox has no knobs, just a slide switch for presets A or B and two footswitches. One acts as a bypass and the other as a speed change, while pressing both applies the brake. Both versions include virtual mic-distance options, with one mic for the bass rotor and a stereo pair for the horn. Editing presets A and B on the organ version is limited to five drive settings and five mic distances, selected by powering up in edit mode and using the footswitches. The guitar version features programmable parameters, and the choice of switching the speaker simulation on or off.

What really appeals to me is that the Mini Vent, though simple, is small enough to fit on a pedalboard — though if incorporating it into a pedalboard system, note that a 12V DC power supply is required, rather than the more common 9V (a suitable power supply is included).

The Ventilator II is built into a tough folded-metal enclosure, which sports five recessed rotary controls and three footswitches, the additional switch acting as a brake. True bypass is provided by a relay. It caters for an optional remote footswitch, and a third-party cost option from Trek II allows you to use the device with any organ that can connect to a Leslie 122. 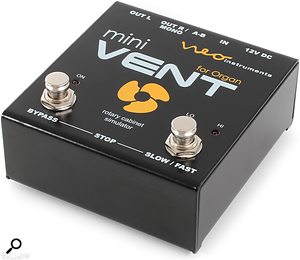 All five knobs have dual functions. The Bypass and Fast/Slow footswitches act in the manner of a shift-lock key, allowing the user to adjust the fast and slow speeds, the horn/drum balance, the ramping acceleration, the drive, the footswitch and speaker emulation modes, the mic distance from the drum and horn (part of the travel also functions as a mix control so that you can output a mix of dry and treated signal), the level and the remote function. The Remote pot position determines which remote function is selected. Additional programmability can be accessed via a ‘power up with buttons down’ routine to change the operation of the footswitches from latching to momentary in various combinations, and it’s also possible to select two different guitar modes (one with mid and high boost as well as the speaker emulation).

The Ventilator II has the same I/O as the Mini, but with the extra jack for the remote and stereo inputs (the Minis are both mono in, stereo out). The rotary effect itself is generated from the signal present at the L/Mono jack, but the stereo input is used in bypass mode, or when one of the rotors is bypassed. A switch on the rear panel selects between high and low sensitivity at the input (the Mini Vents have a similar internal selector, accessed via a jumper). An overload LED warns when the input signal is too hot and all models feature two blinking rotor speed LEDs above the speed-change switch.

When the Ventilator II is set to the same balance and rate as a Mini Vent, they sound the same to my ears — the difference is in the degree of control. The Mini Vent’s preset values for the speeds and ramping dynamics are a little different from those of a real Leslie, but the Ventilator II’s adjustable parameters mean you can stray away from authenticity when artistry demands. The mix controls also make it possible to combine a dry low end with rotary highs (Memphis style) or vice-versa. On the other hand, the Minis have two switchable presets which can be useful if you want a quick change between clean and driven sounds, or if you like to change between virtual mic distance settings. 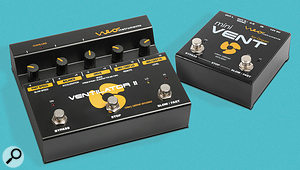 All models provide a fine emulation of the dual-speaker system of a Leslie 122. The rotation rate and speed ramping dynamics of the original have been replicated, so you hear a gorgeous tonal complexity when ramping between fast and slow. By adding just a touch of Drive, all the Neo models are able to emulate that distinctive Leslie growl, which sounds at its most authentic when DI’d into a full bandwidth system such as a recording chain, PA or clean amp. The sound is perfectly usable with a guitar amp, though, particularly as you can bypass the built-in speaker emulation on the Ventilator II and Mini Vent guitar version.

As you’d expect, you get great results with keyboards; even a perfunctory organ emulation starts to sound impressive. I bought the Mini Vent organ version to use with my Electro-Harmonix B9 Organ Machine pedal, and it adds significantly to that pedal’s realism — to the extent that I was recently asked after a gig if my guitar was connected to a sampler!

But there’s no need to limit yourself to organ sounds; a Leslie can work magic on all kinds of synthetic sounds. Used on electric guitar, the sound is a revelation, especially at the slow or ‘chorale’ speed. All models have a high-input impedance, so you can connect a guitar directly. They impart a lovely, liquid warmth and textural complexity to the sound without the effect getting in the way of the playing. The result is so much more subtle than the usual phaser or chorus effects, and much more musical. Kick up the speed and you’re greeted by a bubbly vibrato that conveys a persuasive illusion of rotation, rather than just simple modulation. It really nails the sound of the middle section in Cream’s song ‘Badge’, and the slow sound invites you to play the chords for Pink Floyd’s ‘Breathe’, while the fast sound conjures up a nicely authentic ‘Echoes’. Hit the brake and rotors slow to a halt, but unlike the real thing, they always end up pointing forward — exactly where you want them! So much the better if you can use the stereo outputs, though the effect still holds up well in mono.

There are some decent rotary speaker plug-ins, and good hardware units too, but I haven’t heard anything that sounds this good. Guitar and synth players will probably appreciate the adjustability of the Ventilator II, but I suspect many organ players will be happy to have a no-fuss Leslie 122 emulation; you can’t do much to adjust a real Leslie, after all. The option to set the switches to momentary operation is appealing, though, and that’s one thing I miss on the Mini Vent. Team these pedals with a really good tone-wheel organ emulation and you get very close to enjoying all the benefits of the real thing without any of the inconvenience. To my ears both models really capture the essential essence of a living, breathing miked Leslie — you can almost hear the bearings rumbling and the woodwork resonating!

The Boss RT20 (reviewed in SOS August 2006) and Strymon Lex include the speed-ramping characteristics. Tech 21 use analogue amp emulations in their Roto Choir, and Hammond recently released a Leslie emulator, which I’ve yet to try.

Neo Instruments’ Leslie emulation is so close to the real thing that the only thing you’ll really miss is the wind in your hair when sitting close to a real one — and perhaps the Ibuprofen back rub!