For the first time, fans of Phoenix gear can assemble a full recording channel.

Phoenix Audio’s recent move into the 500-series format saw them launch their first compressor, the N90-DRC/500, and it is joined in the range by two other modules: the DRS-1R mono mic preamp, and the DRS-EQ 500 equaliser — so what we have here is a full channel strip in modular form. The three modules share the same styling. I’m not a huge fan of the choice of material for the knobs/dials, as they feel slightly lightweight, but the modules look good, and feel generally solid and professional. The EQ and preamp feature a small LED meter, which indicates the output level. The designers were keen to point out to me that despite drawing power from the standard 500-series ±16V power rails, all three modules increase the voltage internally to ±24V.

The DRS-1R has all the features you’d normally want or expect in a high-end preamp, and everything’s nicely laid out. There is an instrument/DI input (quarter-inch TS jack), polarity-invert, mute and 48V phantom-power switches, and a 120Hz high-pass filter. The input gain spans 30-70 dB in 5dB steps, with a further 10dB available via the output level control. 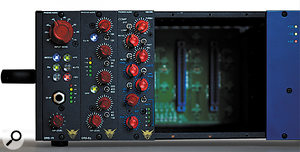 On the day I received it, I put the DRS-1R straight to use on a kick drum in a recording session, and was immediately impressed with the sound it delivered from my Beyerdynamic M88. I soon discovered that how hard I hit the output transformer dictated how much character was imposed on the signal. Staying on drums, I paired the DRS-1R with a Shure SM57 top-snare mic, and the sound was very Neve-like. I’m not a huge fan of that character on snare drums, as it darkens and softens things too much for me, but I know that many people love it, and I can certainly recognise it here. Recording a distorted guitar part, again with an SM57, I found the result more pleasing: it rounded off the slight harshness in a lovely way, and hitting the output transformer harder meant I could almost ‘sculpt’ the tone. I was impressed!

I also tried the preamp on both male and female vocalists in an indie/rock band, as well a male rap vocal, pairing it with some of my usual vocal mics — and this was where this preamp really shined. That Neve-ishness helped give all of the vocals a slightly enhanced texture, the result being that they just seemed to ‘sit’ slightly better, in a way that’s really difficult to define in words. Again, I could push the level harder into the output stage to coax more character out of the transformer. You have to be confident to work in this way, but I actually found it quite difficult to overdo this effect on vocals. The preamp coped comfortably with my gain-hungry Shure SM7B dynamic, and I’d expect it to have more than enough for most ribbon mics too.

Even though the high-pass filter’s slope is gentle, the turnover frequency (120Hz) is high enough that it made me a little nervous when tracking. It sounded nice enough, though, and I expect that this is a feature that I’d learn to trust with time, as I became more familiar with it.

Although they don’t sound quite the same, in general I found myself liking the DRS-1R on the same sources on which I’d typically choose a Neve 1073: vocals, bass guitar, kick drum and electric guitar. I’d highly recommend trying it out if you’re on the lookout for a high-quality vocal preamp that adds a touch of ‘colour’.

My initial thoughts on the N90-DRC/500 compressor/gate module were that it felt a little crowded by comparison with the preamp. I suppose that’s not surprising, considering just how much it has to pack into quite a small space, but it makes a difference in use.

Looking at the compressor first, you have knobs for the threshold, variable ratio and release time, and switches for bypass, fast/slow release characteristic and auto release. In use, I found it really beneficial when tracking an electric bass guitar, as it smoothed things out in a nice, unobtrusive way. I achieved similar results using it to process a kick drum and, as with the other units, driving the output gave a nice, slightly saturated characteristic. I also tried this compressor out on a few different vocalists, and it always seemed to give me nice, smooth, no-frills compression when used sparingly. The unmarked ratio control took quite a bit of getting used to, as it seemed to jump from gentle compression to quite heavy limiting in about a quarter of a turn, which left me with quite a small, workable range for most sources. In general though, I found it to be a smooth-acting and nice-sounding, if basic, compressor. I’d be very happy using it on various sources, which is exactly what you’d want from a channel-strip compressor.

Moving on to the gate section, I must admit to finding this part of the review a little tricky. First, unless you mix quite extensively outside the box, I can’t really think of many instances, given a typical small-studio workflow, where you’d need a hardware gate. Second, although the controls are quite typical, I found myself leaning in, squinting to see what was going on due to the congested layout and the hard-to-read blue-on-black labelling. Once I’d got to grips with it, however, I found the gate quite effective when running a snare and kick signal out the box and through the unit. Once again, you get the added bonus of being able to colour the signal by driving that output transformer. I think that this type of gate could perhaps be useful for live applications too, although I wouldn’t fancy trying to read those controls quickly in a dark sound booth!

Summing up, then, the N90-DRC/500 is a great-sounding unit, albeit with a few frustrations relating to the layout and control. From what I’ve heard, I’d be very interested in a larger and more fully featured compressor that offered the Phoenix audio ‘sound’. However, in this format, I can’t see that this compressor offers much to set it apart from the crowd. If, however, you’re in the market for a basic 500 series compressor and you also have some need for effective hardware gating, it’s well worth considering.

With a modern DAW-centric workflow, a hardware EQ has to inspire confidence — whatever else it does, it needs to give you solid, practical options when committing to a sound during tracking. The DRS-EQ 500 certainly ticked those boxes. Its controls are nicely spaced and easy to use and the choice of selectable frequencies is nicely judged. In fact, I found uses on real sessions for nearly all the frequency bands and functions of this EQ.

I immediately appreciated a little boost at 3kHz when recording a heavy electric guitar part, and I felt confident when engaging the 80Hz high-pass filter. On a 24-inch kick drum, removing either 400 or 800 Hz helped remove some annoying low-mid ‘tubbiness’, and I found the 400Hz band really useful for getting a more ‘scooped mid’ sound out of a bass guitar. A little boost at 200Hz and 3kHz really helped to bring a rather average-sounding snare drum to life, and the high band, at 10 and 15 kHz, provided a nice ‘air’ control for vocals and acoustic guitar. Combine all this with the ability to do more extreme EQ work when mixing, or driving the output stage to get colour and character out of the transformers, and what you have here is an outstanding EQ.

Chaining these three units together would give you a pretty comprehensive channel strip, although the combined effect of all that colouration at each output stage could take some careful handling. As with the company’s Nicerizer summing mixers, it’s the controllable coloration of the output stage that really sets these modules apart from some of their competitors, and it’s really useful to the way most modern small studios operate. Some of the design choices are a little quirky, like the preamp’s 120Hz high-pass filter, and the dynamics module’s gate section, but it’s still very obvious to me why the company’s products have many admirers; they just have such a wonderful sonic quality. The DRS-1R on male vocals was a real highlight, and the DRS-EQ 500 is a fantastic module that now has a place on my shopping list.

The closest comparable 500-series modules, in terms of both character and price, are those made by Neve, Rupert Neve Designs, API and Chandler. For a slightly cheaper preamp option, Warm Audio, Golden Age Project and DAV’s Broadhurst Gardens range provide similarly ‘flavoured’ products. Drawmer‘s DS101 is a dedicated 500-series gate.

The preamp sounds great on many sources, particularly vocals, and the EQ is a beautifully judged tracking tool, with character on tap. Although I didn’t get on as well with the dynamics module, it sounds very good, and enough experience to make it intuitive in use should make it a very effective studio tool.