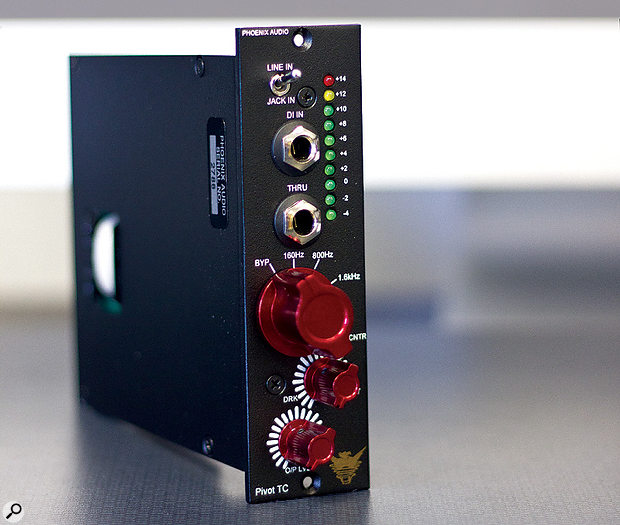 Explore the ups and downs of Phoenix’s transformer-laden tone control...

Aren’t the simplest ideas so often the best ones? The ‘tilt’ EQ circuit is one such idea. Essentially, it’s based around a pair of shelving filters which share the same turnover frequency; a single control applies a Baxandall high-shelf boost coupled with low-shelf cut, or a high-shelf cut coupled with a low-shelf boost. As far as I can see, both the idea and the name originated in the hi-fi industry, where it was desirable to make a tone control that was as simple as possible for the user to operate: R Ambler described such a circuit in a Wireless World article way back in March 1970 and, certainly, amp manufacturers Quad were incorporating them and using the ‘tilt EQ’ label in the early 1970s (it first appeared on their Model 34 amplifier). But the very gentle slopes, small boosts/cuts and, consequently, phase-shift group delays meant that the concept held attraction for mixing and mastering duties too, and a number of manufacturers have since implemented the idea, including Tonelux, Trident, Elysia, Gyraf and more.

The latest pro-audio manufacturers to join the party, with their Pivot Tone Channel, are Phoenix Audio, who have an enviable reputation for high-quality, transformer-laden devices that lend a subtle weight and warmth to proceedings, and this latest addition is no exception — the circuit board is dominated by the chunky custom output transformer. As I’ll explain later, this does seem to lend the familiar Phoenix character to any source fed through it.

By way of controls, there are naturally very few. An input-source selector is joined by a Dark/Bright tilt control (clockwise for more treble and less bass, anti-clockwise for the opposite), a pivot-frequency switch (160Hz, 800Hz, 1.6kHz or bypass) and an output-level control, which can also be used while the device is in bypass. There are DI input and ‘thru’ TS jacks on the front panel, and the DI presents a very high input impedance (10MΩ), which is good news for guitarists, whose pickups should behave rather better than on a lower-impedance input. The line input is, of course, received via the host 500-series chassis’ rear panel. Finally, there’s a 10-segment LED meter ranging from -4 to +14 VU.

My first impressions were favourable; like other Phoenix products I’ve tried, the build quality is top-notch, and everything feels reassuringly solid. The Pivot Tone Channel slid with ease into an API six-slot Lunchbox chassis. I hooked it up to my DAW via my Lynx Aurora interface and calibrated it so that 0VU on the Pivot equated to -16dBFS in my DAW (that the bypass doesn’t route the signal through the output level control is helpful here).

The first application I got to use it on was a distorted electric guitar track. The guy I was recording had played me some examples of a guitar tone he liked, and it was very, very bright. I cranked everything up on the guitar amp we were using, but we were still nowhere near the sound he wanted. Using the shelving EQ on my desk helped, but when I went past a certain point, it just sounded very shrill. Patching in the Pivot Tone Channel provided the missing ingredient — with the tilt control engaged and set at 1.5kHz, I really felt as though I could make it as bright as I liked, without it ever sounding harsh. What I also noticed immediately was how useful the output-level control was. It’s incredibly handy to be able to control not only the level going on the next part of your chain, but to also be able to accurately audition what the unit is doing without being seduced by its output being louder.

I soon felt confident enough to add just a touch of brightening tilt when recording vocals, and on a session where I was using a Coles 4038 ribbon mic on a singer the results were sublime. With brightening tilts at either 800Hz or 1.5kHz, this mic and EQ felt like a match made in heaven. Staying in the realms of tracking, I was recording an acoustic guitar that had fresh strings on and so sounded far too ‘zingy’ for the song we were working on. I set the tilt control at 800Hz and tilting the control towards the Dark side worked perfectly to take the edge off. I also found that if I drove the output level a bit harder, it helped soften and warm the guitar sound even further — great stuff!

Used as a DI, it worked like a charm too; it’s very handy to have a device like this that you can just plug a bass guitar or keyboard straight into and apply broad tone-shaping very quickly. The metering is also worth a quick mention, as it’s refreshing to see that the designers found room in a single-slot module for a full-height LED meter; it provides a very useful visual indication of how hard the output-level transformer is being driven.

I found myself quite happily applying little boosts and cuts on a number of sources over a number of recording sessions, and I never once found myself regretting it later on in a project. Like many of us, I mix mostly in the box these days, and it often takes quite a special, or specific, bit of gear to make me want to introduce hardware to the mix. I spent a while playing with the Pivot Tone Channel when mixing, and the high-frequency content you can bring out on a source can be seriously addictive — you do need to be careful not to be seduced by this unit’s quality into applying too much, so consider yourself warned! But on the right vocal, you can turn the brightness all the way up and, although it may sound over the top, it still doesn’t get harsh.

I’ve used a few Phoenix Audio pieces before. They’ve not only been uniformly good, but they’ve all lent a certain pleasant character to the sound, and so it wasn’t a great surprise when I began to get a feel for the transformer goodness that this particular unit was imparting. On a mix session, I found myself using this before an outboard compressor, and in this context, I could enjoy great control over the EQ and dynamics, while also deciding whether I wanted some transformer coloration to ‘round off the edges’.

I’m usually fairly circumspect when reviewing studio gear like this, but I’m a big fan of this unit. As I mentioned at the outset, simple ideas executed well are a very good thing, and this particular specimen makes it easy to do what I need quickly. That’s high praise for a professional tool. I’m just surprised that this isn’t something you see being used more often in analogue hardware equipment.

I should perhaps mention that I also have some software tilt EQs. Useful as they can be at times, none of them come anywhere near to achieving the results that I was able to get with the Pivot Tone Channel. When mixing many styles of music, I often seem to find myself adding varying degrees of brightening EQ on many sources, and to be able to introduce a touch of extra high-frequency content on the way into my DAW seems to work well for my workflow. When employed the other way, to tame an overly bright source, it can also be highly effective.

The Pivot Tone Channel is well worth the entrance fee for the EQ alone, but when you add in the useful features like the high-impedance DI input, the output-level control, and the high-quality transformer, then I think it represents great value indeed. Highly recommended.

Phoenix Audio have produced a simple but highly effective tone-control module for the 500-series range. For pushing or taming a source’s high-frequency content, the Pivot Tone Channel can excel, while adding useful features like a DI input and an output level control.