Until fairly recently the Orgone Accumulator was only available as a kit — but now even those of us with laughable soldering skills can enjoy one. As any Hawkwind fan will know, an Orgone Accumulator makes you feel greater, is a back brain stimulator and a superman creator. Neutron Sound’s homage has its very own brain — an ARM Cortex M4 microprocessor. The manual further informs us that it’s ‘a digital phase accumulation module’ with three core waveforms and a modulation wave. In keeping with its space credentials, the OA features the mysterious Pulsar Synthesis (about which more anon). Rather less mystery surrounds the crude but effective sub oscillator (with variable pulse width) on hand whenever low-end beefiness is required. 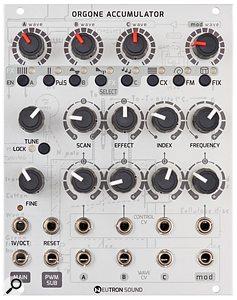 Photo: Schneidersladen.deThe three core waveforms (A, B and C) are selected from a varied pool of 16 and ‘scanned’ — a mixing process that isolates individual waves or creates A/B or B/C blends. In Normal Mode, this mix amplitude-modulates the ‘Mod Wave’, whose frequency and amount (index) are found on the second row of knobs. The core waveforms range from pure to harmonically rich, with white and pink noise tucked in for good measure. By automating wave selection and/or scanning, it’s an easy matter to create wavetable-like transitions that are either steppy or smooth.

The basic but effective FM Mode is never more than a button press away, and given the range of waveforms it’s no surprise the results are often biting and gnarly. Activate ‘Fix’ and the modulator frequency is removed from pitch tracking, its frequency knob now operating over a much wider range. FM is a ready source of metallic, jarring complexity, but we’re still only scratching the surface. Each of the three primary waveforms can be processed by a series of effects, one of which isn’t an effect at all but a complete drum voice. If it’s not already obvious, feature-light this module ain’t!

To select an effect, you slip into the ‘time out’ menu system, kitted out with friendly icons as prompts. The list includes detune (chorus-like), twin (doubling), two types of distortion/wavefolding, a chord mode, spectral (cross-mode and detune), delay and, last of all, the drum mode. The chord effect generates major or minor chords depending on the direction the effect knob is turned, while the delay is short and suited to flanging or metallic, resonant feedback with hints of Karplus-Strong synthesis.

All the effects have a major impact on the basic waveforms and they can be enabled individually for A, B and C respectively. Despite being a busy panel, probably its only cryptic button is the one labelled ‘CX’. By pressing it wave C becomes a copy of B, freeing up its waveform selector to be a pitch-bend instead. This is odd but not entirely without value. Speaking of pitch, the main pitch and fine-tune controls are supplemented by a funky innovation — Lock. Having tuned up perfectly, lock disengages the regular pitch controls, protecting you from the accidental tuning upsets that can occur when weaving fingers through a rat’s nest of patch cables.

All eight main parameters can be modulated via CV inputs on the bottom of the panel and there’s another thoughtful addition too: CV normalisation. Having enabled this (via a switch on the motherboard), any connection made at the Scan input is immediately available to the other inputs on the row, ie. Effect, Index and Frequency. All are governed by individual depth and polarity controls as before and, naturally, they can be interrupted by directly connecting other modulation sources.

This brings us to Pulsar Synthesis, a topic about which I knew nothing prior to reading the paper referenced in the manual (and only a bit more afterwards). With its references to ‘particles of sound’ each with repeating envelopes, I initially wondered if it was some form of granular synthesis, but not so. Pulsar Synthesis is an extra layer sitting over everything else. It’s based on a pulsed waveform derived from the A, B, C mix, with the envelope duration of this ‘pulsaret’ set by the Index control. Its typically nasal, band-pass sounds are quite spacey and even stray into formant voice-like territory at times. I can’t claim anything approaching mastery in just a few weeks, but having any new form of synthesis to play with can never be a bad thing.

I can’t wind this up without mention of the Drum Mode, which consists of two oscillators with cross-mod, pitch modulation and a pair of decay envelopes. As with any drum module, you first need to provide a trigger — in this case at the Reset input (ordinarily used to reset the phases of all oscillators). With triggering sorted, it’s just a matter of referencing the cheat sheet to learn the rearranged knob and button assignments. Drum mode is a very pleasant surprise and the equal of many stand-alone modules. Its scope covers an array of electronic percussion from pitch-swept kicks and zaps to ringing clangs, dirty snares and every breed of abrasive, trashy hit known to man, all with full CV control.

The Orgone Accumulator is no ordinary oscillator. Its multi-faceted personality inevitably requires an investment of time, whether to plumb the subtle depths of Pulsar Synthesis, the effects selection box or the complete alter-ego that is Drum Mode. Fortunately, unlike many ‘deep’ modules, it is not too mind-bending to get into and I quickly found it capable of smooth, conventional and even relatively lush tones. That said, there’s no denying the ever-present gravitational tug into twisted, spiky, utterly weird regions where tame oscillators fear to tread. Wonderful!