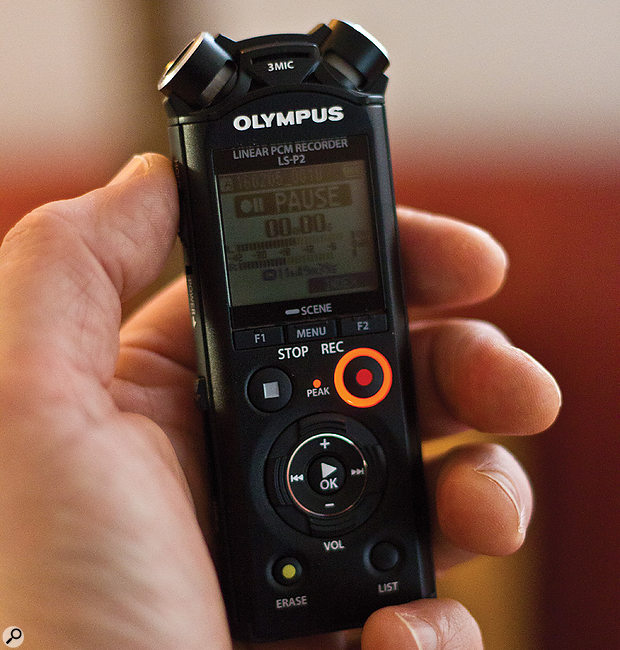 One of the biggest selling points of Olympus’ LS-P2 is just how big it isn’t! In fact, Olympus say it’s the smallest recorder in its class, and I’m inclined to believe them — at just 108.9 x 39.6 x 14.4 mm, it fits easily in any pocket or kit bag. Nonetheless, they’ve packed three mics inside it to form a ‘Tresmic’ array.

The LS-P2 runs from a single AAA battery and can charge the included NiMH battery via the USB connector which slides out of the bottom edge (this also allows for file transfer). Up to 40 hours of recording time is possible from a single battery charge — significantly longer than the direct competition. There’s 8GB of memory on board, and a Micro SD card slot, tucked away in the battery compartment, allows for additional storage. The LS-P2 can connect to peripheral Bluetooth devices for wire-free recording/playback or remote control, and there’s a free control app called Olympus Audio Controller BT (it’s Android-only — an iOS equivalent would be a welcome addition!). A tripod adapter is included for non-handheld operation and this fits nicely onto a third-party shockmount, such as those made by Rycote.

The less costly LS-P1 model is similar but offers fewer features, lacks the Bluetooth support and has only 4GB of storage. Notably, this model has only two stereo mics, rather than the three found on the LS-P2.

The LS-P2 also boasts a greater frequency range than the LS-P1. The latter’s stereo mics span 60Hz to 20kHz, as do the outer two mics on the LS-P2. In both cases the mics are directional and form a non-coincidental X-Y array. Yet, there’s a less obvious omni mic in between this pair on the LS-P2. By high-pass filtering the stereo array and low-pass filtering the omni mic (omnis naturally exhibit greater LF extension) this Tresmic array extends the response right down to 20Hz, without sacrificing the natural stereo image from the directional left/right mics. It’s a simple but clever idea that works very well in practice.

The stereo image can also be ‘Zoomed’ in or out, presumably by using different blends of the centre and left/right mics to narrow/widen its pickup pattern. It’s also possible to switch off the centre mic entirely if required (in which case, the frequency response is curtailed to that of the LS-P1).

Linear PCM recording is supported at up to 24 bits and 96kHz, and the mics can handle SPLs up to 120dB without clipping. MP3 recording from 8 to 320 kbps is also available, allowing for a much longer recording time (over 250 hours). Curiously, if you opt to record linear audio at 44.1 or 48 kHz, only 16-bit resolution is offered, whereas at 88.2 and 96 kHz only 24-bit resolution is offered. Why there’s no 44.1 or 48 kHz 24-bit option eludes me (converting down from 88.2kHz is easy enough in your DAW, but the files occupy twice the storage on the recorder!).

Internal functions include audio file normalisation, file editing and numerous recording options. There are five file folders for recorded audio plus a separate folder for music, to allow the device to be used as a conventional music player. In addition to a switchable low-cut filter used for recording, there are playback EQ presets for different types of music and the five-band EQ can be adjusted by the user over a ±6dB range. File-editing functions include file splitting and trimming, and there’s a handy calendar view for searching audio files by the date they were recorded.

For non-continuous dialogue, an auto-start mode allows recording to commence when the input exceeds a threshold, and a voice-sync mode can stop and start recording, so as to avoid capturing pauses between speech. There’s even a Recording Scene menu (Lecture, Conference, Meeting, Dictation, Music and DNS, the last optimised for speech-recognition software); the recorder adjusts its own parameters according to the type of recording you aim to do. To use manual settings the Recording Scene feature must be turned off. There are also playback settings for optimising voice playback and skipping blank spaces. You can even change the playback speed, allowing you to skip through dialogue, and the ability to loop sections of audio has been improved compared with earlier models. Index markers can also be dropped into files to aid location of specific sections. On playback, a Voice Balancer function can be activated to increase the volume of quieter sections, much in the way a compressor does.

The metal shell case has a postage-stamp-sized backlit LCD window around 30mm square. Below this are two function buttons relating to what’s shown on screen, and the Menu button is tucked between them. The larger Stop and Record buttons are above the familiar cursor-style pad, with an OK button in the centre, with two buttons below for Erase and List. A sliding power switch on the left side also has a Hold facility to prevent inadvertent operation, and is joined by a button that slides out the USB connector. On the right-hand side is a mini-jack headphone output and an external mic input. The battery compartment is found on the rear.

When you switch on for the first time, you’re invited to set the date and time, and to switch the voice guidance feature on or off. This was designed specifically for hard of sight and dyslexic users — its calm voice can tell you the battery state, which of the five internal folders you’ve selected for recording, which menu item is selected and so on. It’s certainly helpful if you’ve left your reading glasses at home!

A Menu list lets you navigate the various functions such as using two or all three mics, setting the zoom function, setting the internal limiter to voice or music modes and choosing Manual, one of three preset record levels or Auto record-level setting. Manual lets you set your own level using the cursor keys. Auto varies the recording level according to the input level, and so is better suited to speech capture than to ‘serious’ recording. Pressing the Record button once gets you into record-ready mode, and pressing it again starts recording.

The menu navigation system is intuitive, but leaving the voice guidance on can help you get your bearings. It’s great to see so many useful onboard features, as this recorder is aimed at so many different types of user, but my guess is that for serious music or sound effects recording, editing will be done mostly by computer after transferring the files, and the record level will be set manually.

In fact, the feature that might be most useful to serious sound gatherers, and for those mounting the recorder on a camera, is the Zoom facility, which allows the stereo width to be changed to suit the recording environment. Zoom is off by default, but once activated (via the Rec Menu) there are six settings that get progressively narrower than the default, and three degrees of ‘extra wide’ coverage.

The Android control app is fairly simple — there are three large buttons — but it can be useful for remotely stopping and starting recordings and for adding Index points. It’s obviously handy for remote operation by self-recording musicians. The LS-P2 paired easily with my wife’s Samsung Galaxy phone, and the app worked reliably as long as I stayed within Bluetooth range.

What really matters, of course, is the sound quality. With no moving parts to cause vibration, the LS-P2’s mics do a great job, capturing clean-sounding recordings, though it’s worth noting that a good anti-vibration mount helps prevent surface vibrations reaching the recorder. There’s no continuously variable recording-level control, but that’s not really a problem — if you don’t want to use one of the three preset gain settings, you can opt for manual cursor-pad control of recording and playback levels.

High-quality speech recording didn’t pose any problems, and switching to a more challenging source such as acoustic guitar proved that the LP-S2 can hold its own in that department too. I tried miking from about half a metre with the default pickup pattern, and also from a couple of metres with the maximum Zoom setting. In both cases, I captured a sound that rivalled what I obtain from my usual studio mics, and there was always a good sense of stereo placement. There was minimal background noise too, other than that which could be attributed to me moving around, so LS-P2 recordings could certainly be imported into a serious DAW project.

Don’t let the size fool you — this is a most impressive and intuitive little recorder, and while the additional features don’t get in the way if you don’t need them, they’re readily available if you do.

Tascam, Zoom, Yamaha, and Sony are amongst a number of companies making good-quality solid-state handheld recorders.

The Olympus LS-P2 is a compact, yet very versatile, little recorder capable of making great recordings.