Do Olympus’s latest recorders maintain the high quality and intuitive control of their earlier models?

Usually, having very little to say about a product in a review is a problem, a clear sign of indifference on the part of the reviewer — but that’s not the case here. This review is short because, as with previous Olympus digital recorders, the LS12 and LS14 have been kept deliberately simple, with the focus being almost entirely on the quality of recording and the ease of use. And even those points I’ve pushed myself to list as a ‘con’ (I have to find some, it’s my job!) are facilities that are available elsewhere in the Olympus range if that’s what you’re looking for. I’ll focus on the LS14 in this review because other than the addition of a third, central mic, slightly more on–board storage, and the inclusion of otherwise optional accessories (a soft case and a stand–clip), it’s almost identical to the more affordable LS12. 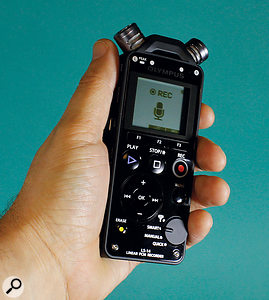 The Olympus LS14 bears a striking physical similarity to the company’s earlier compact recorders and, like all of those, it’s also very intuitive in use. So much so that I barely had to consult the introductory booklet that came with it, much less the advanced guide that, along with the generic auto–installing drivers for Mac and Windows, are provided on the in–built flash drive.

Operation is centred around four different modes, each of which is activated by twisting a knob at the bottom right:

Tuner Mode: By default, this is set up as like a standard guitar tuner, where the user selects the frequency (Hz) and a needle displays how far flat or sharp the detected signal is. But you can also switch to a mathematical–plot view, in which frequency is represented on the Y-axis and it traces pitch over time (X-axis). That’s quite a useful feature, potentially, as it can tell you if, for example, a guitar string pitches up as you pluck it, before settling on a given pitch, making it much easier to achieve accurate tuning. It didn’t outperform the strobe–tuner app on my smartphone, but it’s a useful aid nonetheless, and great to have it built in.

Smart Mode: This is a really neat idea and makes recording almost idiot–proof. It starts with a 30–second soundcheck, during which the recording levels are automatically set, and after the 30 seconds it starts recording. It’s a very easy way to do things, particularly if you’re recording yourself jamming, and don’t want to have to keep checking and refining levels. You can shorten the soundcheck time to 10, 30 or 60 seconds, or endless if you prefer. My only wish is that it would capture audio during the soundcheck time, just in case — because that way you could make use of the idiot–proofing feature in those moments where you have no option but to start recording instantly.

Manual Mode: As the name implies, this mode allows you to adjust the recording level manually, and to do so you just use the arrow keys on the front of the LS14.

Quick Mode: This last mode just puts you straight into recording for those times when you just can’t afford to wait. I must admit I rather struggled to see the use of this in practice, but as it doesn’t inhibit your use of the LS14, it’s not exactly a problem.

The Modes determine how you use the LS14, and help to keep things really simple for the user. But there’s a lot more to it than that, as you’ll notice when you hit the Menu button. This brings up a number of icons on the screen, and you navigate and select these using the TV remote-style up/down/left/right/OK buttons, the first four of which are arranged in a circle around the last.

When it comes to the recording file type, you have the basic option between data–compressed MP3s or the more professional PCM WAV files. For the latter, you have various options, starting at mono or stereo 44.1kHz/16 bit and going up to mono or stereo 96kHz/24 bit. Curiously, 24–bit word length is only an option for 88.2 or 96 kHz sample rates, not 44.1 or 48 kHz. If those extra eight bits are doing anything useful, and the converters are of any reasonable quality, I can’t see why there’s no 24-bit (for headroom) 44.1 or 48 kHz option (to keep file sizes manageable, or in a common format for import to your DAW without sample–rate conversion) . The positive bottom line, though, is that this device is capable of high–quality PCM recording.

A switchable low–cut (high–pass) filter can be set to a turnover frequency of 100 or 300 Hz, or switched off, of course. It might have been nice to have a slightly lower option too, at 60 or 80 Hz to cut out any LF rumble without straying into ‘wanted audio’ territory, but the slope is suitably gentle and a 100Hz setting will suit vocal or guitar recording perfectly well, and compensate to some extent for the overblown bass end on many a gig PA system!

While plug–in power is made available via the external mic stereo minijack socket, there’s no professional 48V phantom power, and thus no means of attaching professional mics without their own preamp and/or adapter cable. There’s also a minijack line input, but no digital input option, and no mono high–impedance instrument input for electric guitar, bass and the like.

In fact, in terms of bells and whistles, the LS–series recorders’ list is kept mercifully short. To compare it on paper with something like a Zoom H4N, you’d notice a whole host of things missing — such as guitar effects, digital mixers and the like. While I’ve used portable recorders like these a lot (and while the Zoom H4N does have plenty to recommend it) I’ve never found much of this any use, and have never been tempted to use such facilities outside of the review process, simply because there are much better — and perfectly affordable — dedicated tools for those jobs. I suspect that the smartphone app market will eat further into all that as well, which means that the USP for devices such as the LS14 is their compact, single–use simplicity. You get the tuner that I mentioned before; you get a metronome; and you get a built–in speaker, to audition what you’ve recorded. That’s about it: everything else is dedicated to the task of recording what you present to the mics or external inputs.

There’s both built-in storage (4GB to the LS12’s 2GB) and the ability to record to the ubiquitous micro SD cards. It’s nice to have both. Despite the presence of a USB port, though, there’s no option of using this device as an audio interface — as far as I can see, this connectivity is simply for data transfer. Do we need such devices to double up as audio interfaces? Perhaps not, as most people using computer audio software will already have an interface of some sort, but it does seem a no–brainer to include the facility, and it would have been useful to some users, I’m sure.

The third mic that I mentioned earlier is an omnidirectional mic, and is placed centrally, between the left and right cardioid mics, which are themselves positioned at 90 degrees to each other. It’s something Olympus call the Tresmic system. Rather than capturing three separate channels, though, it appears to be configured as a sort of M/S stereo array, with the results being automatically decoded to and written as L/R stereo files. Olympus claim that the Tresmic approach enables them to extend the frequency response of the recorder, which I presume means that it takes advantage of the omni mic’s more accurate bass response. It’s a decent idea, though it has to be said that I didn’t feel the LS12 to be hugely lacking in this respect.

As I suggested at the outset, there’s really not an awful lot more to say. The LS12 and 14 both continue in the tradition of their antecedents. They make recording very easy, and they can record both highly compressed MP3s and high–resolution WAV files alike. They do absolutely nothing to get in the way of the task in hand — and that’s precisely the way things should be. The couple of minor ‘cons’ I’ve made during the course of this review are precisely that — minor — and that means that both of these recorders score very highly in my book. If nothing else, the greater storage capacity of the LS14 will make it the better option for most people. That said, whereas I’d consider the LS14 to be fairly priced here in the UK, the LS12 is rather more affordable and it’s debatable whether the additional features and accessories of the LS14 will be justified by the higher price. Based on quality and usability alone, both recorders are recommended.

There are plenty of stereo recorders now available, with multiple models from the likes of Zoom, Sony, Marantz, Roland, Fostex, Korg, and many more. Another alternative would be to couple an iOS or Android smartphone with suitable software and an external mic/interface — but Olympus’ USP is elegant simplicity, and mobile phones are no rival in this respect.

The Olympus LS12 maintains the high quality and no–nonsense features that made its predecessors such as the LS10 justifiably popular. The LS14 adds a centre mic, which not everyone will need, but will be useful for some.