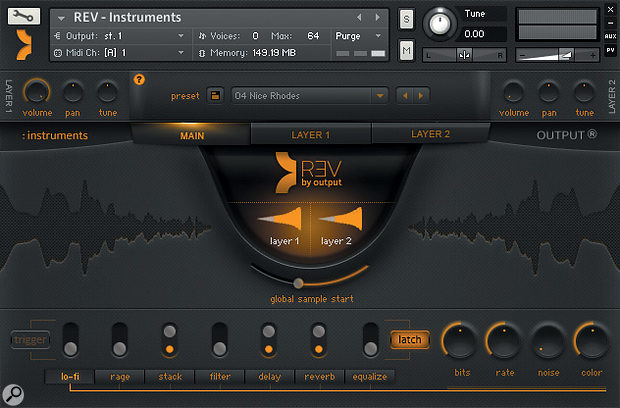 Fledgling company Output state that they aim to create ‘groundbreaking concepts, new sounds,’ and, ‘new sources of inspiration,’ and also that Rev is the world’s first collection of reverse instruments, loops, rises, pads, pulses and swells.

Of course most audio-editing software programs have an option for reversing samples and audio clips, so a library of reversed sounds isn’t necessarily groundbreaking on its own, but Rev’s samples are merely a starting point.

Rev has been divided up into four ‘Engines’, so that the user can choose whether or not they want to load up Instruments, Loops, Rises or Timed Instruments. There isn’t room here to describe all the control options, as there are so many of them, but they can be likened to the sort of sound-shaping tools one would expect to find on a synthesizer and include LFOs, filters, envelopes and effects.

Each engine has its own extensive bank of samples and, in the case of the two instrument engines, each of their samples can be used dry, with effects (these are effects that were added before the sample was reversed), as a pad-like loop, and in their original forward state. Apparently the sound sources are real instrument recordings rather than virtual creations, which has helped prevent them from sounding too synthetic.

The Instruments and Timed Instruments engines are more complex than those of the Loops and Rises, as they provide two sample layers that can be edited independently of one another before being combined and processed in the main page. Complex soundscapes can be built if, for example, each layer is given a different stutter effect and delay setting. The only downside is that the engines take quite a long time to load up, and there are no ‘lite’ options.

As it turns out, reversed sounds are a good starting point for sound design. Sounds that originally had a bit of an attack become rhythmical when reversed and take on a rather unearthly quality that is ideal for modern-day score work. Processing the samples with the delays and filters, and then layering and distorting them, is simply a matter of tweaking a few dials, so even the most unimaginative user can hardly fail to come up with something original and interesting. These tools, combined with some clever key-switching options, which allow the turning on and off of certain effects and the triggering of samples at different pitches using notes on a keyboard, make for a very playable instrument.

I’m not sure if Rev is truly groundbreaking, simply because there are lots of other very innovative sample manipulation tools out there, and reversed sounds are nothing new. Nevertheless, the Output team have done things their own way, creating high-quality original sounds and sound-editing tools which will undoubtedly serve as a source of inspiration for sound designers and composers.