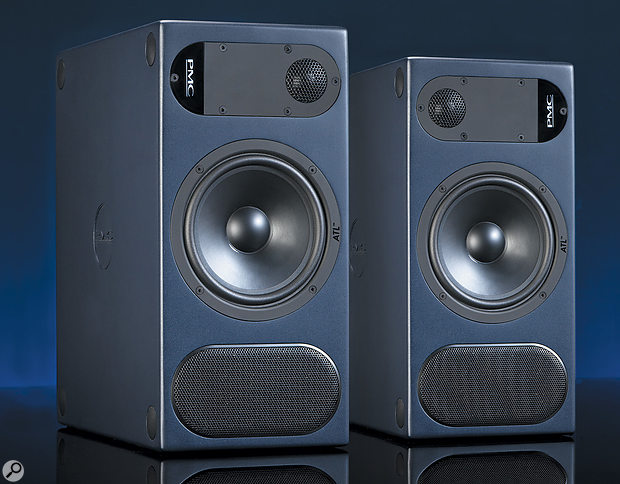 The eagerly anticipated flagship in PMC’s new TwoTwo range is finally here. Has the wait been worthwhile?

I reviewed PMC’s new high-tech TwoTwo 5 and TwoTwo 6 compact monitor speakers some months ago (July 2013), but the flagship of the range has only recently been released: the TwoTwo 8, which is the largest model in the family. Bigger than any previous PMC compact monitor, the TwoTwo 8 partners a new 200mm (eight-inch) doped-paper bass driver with the same 27mm (one-inch) soft-dome tweeter used in all the other TwoTwo models. The enlarged cabinet is surprisingly light (for its size) at just 12.2kg, and measures 250 x 500 x 410 mm (WHD), making the internal volume roughly 180 percent larger than the TwoTwo 6 and nearly four times greater than that of the TwoTwo 5.

The front-baffle dimensions maintain the family profile, being almost exactly twice as wide as it is tall, although the TwoTwo 8’s depth is only 1.6 times the width, while the two smaller models are nearly twice as deep as they are wide. The larger cabinet allows a 1.9m transmission line, which confers a bass extension to 35Hz, while the maximum SPL increases to 115dB at one metre.

I won’t describe the technology and facilities in detail again here — check out my original review for the full story — but the edited highlights of the range are that these all-new designs are true active two-way monitors, employing a trio of Class-D amplifiers with on-board DSP to provide the crossovers, driver protection, room EQ and level calibration. Both digital and analogue inputs are provided, with internal signal processing performed at 96kHz, and a bespoke networking system allows multiple speakers to be interconnected to share digital audio and control signals. As you would expect, PMC’s unique ATL (advanced transmission line) cabinet design is employed, with the line venting on the front baffle. The TwoTwo designs all employ an offset tweeter, too, which allows the cabinets to be orientated in either portrait or landscape formats without compromising the stereo imaging or frequency response.

PMC have always prided themselves on achieving very smooth and consistent dispersion from their monitors, which plays a major role in their famed stereo imaging. However, the larger the bass driver, the harder it becomes to match the dispersion angles with the tweeter at the crossover point, because the directivity of a speaker narrows with increasing frequency, and especially as the wavelength becomes significant in relation to the cone diameter. Consequently, it took PMC’s boffins a little longer to optimise and perfect the design of the bass driver and to fine-tune the DSP crossover — hence the delayed launch. However, that extra effort was certainly well worth it, as the results are quite exceptional. Despite the specifications claiming only an additional 5Hz of extension over the TwoTwo 6 (35Hz instead of 40Hz), the TwoTwo 8 produces an astounding quality and extension of low end for such a modest cabinet size — there aren’t many speakers this size that can do Mickey Hart’s ‘Temple Caves’ proper justice!

Stereo imaging is expansive and stable in both dimensions, and the superb mid-rangeclarity — such a strong aspect of the smaller TwoTwo models — is nothing short of astonishing in this eight-inch version. The obviously more extended and remarkably solid bottom end will appeal to those working in bass-heavy genres (provided the room can take it, of course), and the TwoTwo 8 is noticeably more powerful too. Although intended as a mid-field monitor, the TwoTwo 8 would work quite happily as a far-field monitor, if necessary, in smaller control rooms.

I’m pleased to report that the TwoTwo 8 is a very worthy and welcome addition to the family, as well as an exciting flagship that bridges the gap nicely between PMC’s compact near-field and large three-way mid-field and far-field monitors. PMC’s digital technology is empowering in the TwoTwo range, delivering genuine high-end monitor quality that is quite remarkable for such small and apparently conventional two-way monitors. Highly recommended if the budget allows!

Complementing PMC's entire TwoTwo range is a brand new subwoofer, called (unsurprisingly) the TwoTwo Sub 1, and a dedicated remote control unit. The latter is very similar to that deployed with the IB2 SA systems, providing complete configuration access and adjustment of all menu parameters in every speaker chained into the same system network. It also provides day-to-day volume adjustment and source selection. 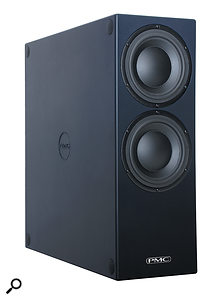 The new subwoofer looks superficially similar to the existing TLE1, sharing the same unusually tall, thin and deep profile with twin bass drivers. However, the new model employs the same DSP-based electronics and Class-D amplifiers as other TwoTwo speakers, and is equipped with one digital and two analogue inputs, plus PMC s network connections. The same analogue and digital audio connections are provided to output filtered or unprocessed signals to the satellite speakers. The DSP parameters are configurable for level, phase, high- and low-pass filtering (frequency and slope), plus a single band of parametric EQ, and this new subwoofer is capable of significantly greater SPL than the older model. The Sub 1 and remote control were both launched at the NAMM show in America in January 2014.

The delayed flagship model in PMC’s TwoTwo range is well worth the wait, delivering remarkably accomplished levels of performance, clarity and sonic precision from such an outwardly conventional design.