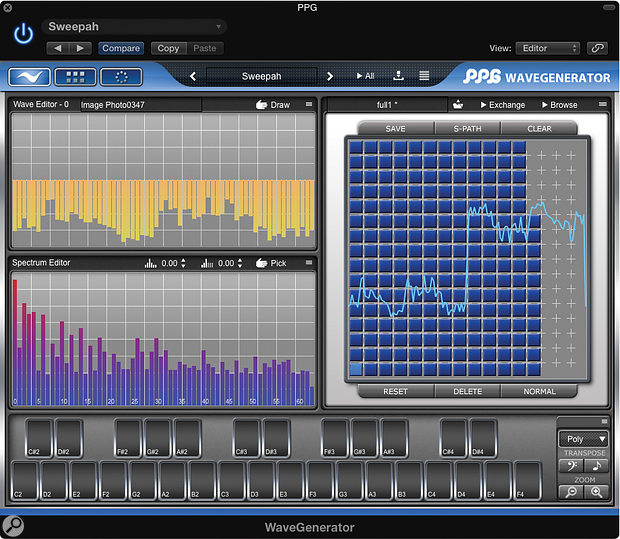 Apps based on existing software are far from unusual, but Wolfgang Palm has chosen to go the other way.

When it comes to taking a different approach to everyone else, Wolfgang Palm, of Palm Products Germany, is an old hand. His blending of digital oscillators with analogue filters in the PPG Wave synths blazed a trail for Waldorf and others to follow. More recently, he caught our interest with two rather tasty iPad apps, a move that could have left Mac and PC users feeling out in the cold. Fortunately, Palm has now ported the first of these from iOS to the VST and AU formats, travelling in the opposite direction to most.

When I say “ported”, it’s surprising how close they are. Some options have been lost and parameters have moved around on screen, but if you’ve used the app already there will be few surprises, other than perhaps when you compare prices. In theory, apps are inexpensive because they are less susceptible to piracy, but I couldn’t help thinking that, with the main development complete, this was an ideal opportunity to test whether lower prices in general discourage theft.

So how does WaveGenerator fare in its new environment? Once authorised and running under Logic X, I was immediately struck by the impression that, even though WaveGenerator is perfectly laid out for iPad use, it keeps rather too much information tucked away. It would be a step forward if its panels were expanded to show more parameters simultaneously. I’d happily ditch the redundant on–screen keys, for a start.

While you’ll find a low–pass filter and some basic effects, it’s the three oscillators that are key to WaveGenerator’s unique timbres. At their heart is the most up-to-date version of wavetable synthesis yet — from the man who brought it to the world in the first place. Each oscillator’s output is sourced from a grid of up to 256 waves and it’s on this grid that the program’s real action takes place.

To get started, the grid needs to be populated and there are a number of ways this can be done. Firstly, there’s an extensive catalogue of supplied wavetables, including classic PPG tones, plus tables of waves that were hand–drawn or created by various (unspecified) analysis techniques. The raw material covers familiar ground from other synthesis types— for example, there are wavetables simulating pulse-width modulation and oscillator sync — but the list extends much further to encompass some pretty off–the–wall collections. Finally, there’s an extensive user–created library thrown in for the hell of it. 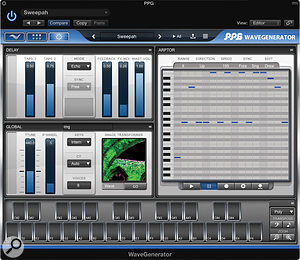 Images (of at least 128 x 128 pixels) can be converted to wavetables. Whether a gimmick or a bit of harmless fun, it's a fast way to generate unusual waveforms.

Fully exploring the wavetable libraries will require a leisurely investment of time, but if only complete originality will do, you can build a table entirely from user waves, either by drawing individual waveforms with the mouse,tweaking the spectrum editor, or even importing images to be converted into wavetables. However you accomplish the task, this is a slick and intuitive way to create new source material and, having done so, you are free to plot the path your oscillators take through it. Here, the Blending parameter is important as it sets the smoothness of transitions between adjacent waves, the top value of 1.00 being the glitchiest and most abrupt.

At its best, wavetable synthesis is all about movement and, having clicked a series of points to set the direction of travel, the most obvious technique for controlling the speed is by using a wave envelope. There’s one of these for each oscillator, although it’s equally effective to share a single envelope amongst all three.

With just one route through the waves, you’ll appreciate the ‘wave offset’, which introduces a shift to the basic path. There are also a range of well–chosen modulators to further change the motion, such that each oscillator can have markedly different timbral content and motion. The end rewards are the distinctive harmonic shifts and glitches that only genuine wavetable synthesis can deliver. Unlike the app, you can’t see the wave envelope and wavetable on the same screen, which is a shame because it’s useful sometimes.

The oscillators offer two audio settings, with the first optimised for low frequencies and celebrating aliasing and overtone–laden nastiness at the top end. The second is softer and purer at high pitches, but gets nasty down below. There’s a ‘sub’ mode too, handy because the oscillators are also available as modulation sources. 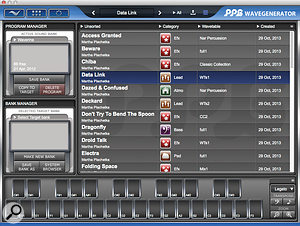 You can import banks and wavetables created on the iPad app.

It’s probably fair to say that WaveGenerator’s most recognisable sounds are bright, sharp and more in your face than the average soft synth, but there are hidden mellows too. Some surprisinglydreamy vibes, vocal pads and electric pianos can be found amongst the distinctive digital sheen of the factory patches. It’s also quite straightforward to locate conventional sawtooth, square and triangle waveforms and rustle up some no–nonsense analogue synthesis emulation.

Of course, a true analogue filter would have been highly desirable to sweeten the result — a technique that worked beautifully once upon a time in hardware. WaveGenerator’s 24dB software version is functional and precise, and while not overly sweet, is serviceable enough. When you switch to its overdrive mode, the filter’s output becomes instantly harder and grittier. The overdriven character is an ideal partner for some of the colder, more metallic wavetables, delivering aggressive tonality ranging from the mildly abrasive (ie. fingernails on blackboards) right up to ‘screamingly torturous’ (Katie Price without Auto-Tune). Here’s where you’ll probably be glad of the further treatments available in your DAW.

I experienced a couple of crashes with Logic X early in my WaveGenerator adventure. These typically occurred while I was fiddling with wavetables, drawing new paths, or sculpting waveforms while simultaneously playing the keyboard to audition the results. Once I learnt some restraint, however, the AU version handled well and certainly beat trying to incorporate the app version into songs using the iPad’s camera kit and minijack output! However, I can’t say it’s the most inviting (or attractive) synth to edit. Partly this is because WaveGenerator is deep. For a start, it has no less than 13 envelopes (with loop points) for just about anything you’d need an envelope for, but frustratingly only one of these is shown at once. It’s the same deal with oscillators, noise generators and the four LFOs; you have to keep selecting them to tweak each in turn. 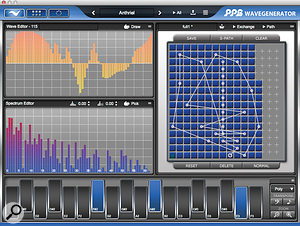 I understand the maintenance benefits of keeping the iPad and plug–in versions synchronised, but constantly plucking envelopes from a small pull–down menu isn’t my idea of fun. Another interface–related idiosyncrasy is the use of numbers instead of virtual knob graphics. This suits tabletoperation well enough but when you replace fingers with a mouse or external MIDI control, those numbers don’t offer the potentially useful ‘real world’ glimpse of a patch that we’re used to from other virtual instruments. A lot of the values are scaled from 0.00 to 1.00 which looks, frankly, a bit odd.

Fortunately it’s not all functional and austere. The envelopes are superbly visual, even down to the adjustable curves of each stage, accessible at the click of a mouse. I also appreciated the animated view of progress through the envelope points, especially useful in the case of the wave envelope.

The effects section (a delay) was a worthwhile inclusion to an app but is unlikely to see extensive use when up against even the most basic effects supplied with a DAW. That said, it would be wrong to completely dismiss a delay with clocking capability, especially one that teams up with a rather effective arpeggiator. The delay and arpeggiator (and the LFOs) can happily sync to the host’s tempo, and since the arpeggiator operates like a basic step sequencer, I found WaveGenerator to be a valuable source of rapidly created patterns. 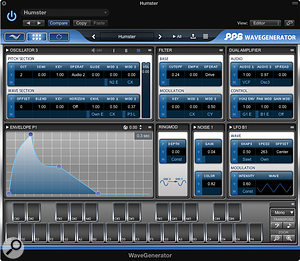 Create your ideal envelope shape by dragging the points and curves.

When programming new patches, this is where having data that’s freely interchangeable with an iPad reaps rewards. Patches are grouped into banks, just like old–style hardware synths, which makes management of them uncomplicated, although a shareable (maybe online) database would have been even handier.

It’s an unusual route to travel from app to fully fledged virtual instrument, but its happy side–effect is the transferability of data. It offers a neat solution to the eternal problem: when will I get time to program new sounds? Noodle on the bus or the settee, create fresh patches and sequences, then drop them into the studio at your convenience. Admittedly I’m not convinced that translating an app results in a virtual instrument that looks stunning or classy, but it does make sense if you have both the app and the plug–in. Still, it’d be nice to see more of the synthesis engine on screen, perhaps making the interface scalable and with more informative graphics.

As far as the sounds go, there are some decent example sound banks full of recognisable PPG tones, bells anddelicate tinkles, plus an assortment of hard basses and leads, but none so extensive they’ll deter you from diving in and making your own. Wavetable creation, once a mysterious and arcane art, is here rendered ludicrously easy — and it’s not even essential from day one because there’s such a plentiful supply of factory tables. You can spend many a happy hour exploiting them without getting bored, or at least I did.

Cosmetic niggles aside, PPG WaveGenerator is a wonderful evolution of wavetable synthesis and regardless of where it began life, makes a bright and distinctive addition to any plug–in collection.

There have been virtual PPGs in the past and many soft synths now incorporate some kind of wavetable oscillators: Absynth, Alchemy and Synthmaster, to name but three. Probably the closest rival is Waldorf’s Largo, which incorporates the best of the Blofeld and Q hardware synths and Waldorf’s take on wavetable and virtual analogue synthesis.

WaveGenerator was a stunning achievement as an iPad app and now it’s available as a regular plug–in. The distinctive harmonic sweeps and cutting digital tones suggest wavetable synthesis still has plenty to give.