Making Music On The Move By Bill Lacey & Paul Nagle

Magellan is a new virtual analogue synthesizer for the iPad. It's notable for having two independent synth parts, accessible via separate on-screen keyboards or stacked into one monster layer. Each synth has three oscillators and two filters and when these spurt through the extensive effects rack, the end result isn't always subtle, but can be brutally effective. Factor in a basic audio recorder, dual arpeggiators and a polyphonic step sequencer, plus a Kaoss-style performance pad, and Magellan ticks more boxes than you ever thought existed. The downside of this is that the interface feels somewhat cramped on an iPad screen and I couldn't help thinking we're reaching the limits of how much can (or should) be included in a single app. 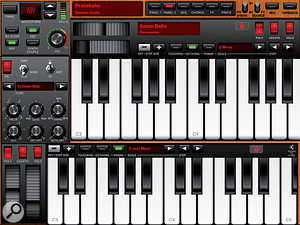 Magellan lets you play two patches on two keyboards at once, each with their own arpeggiator. 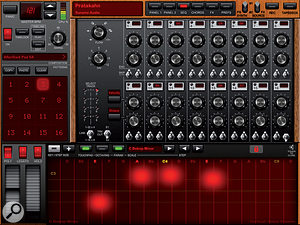 The Magellan sequencer. Note the standard keyboard has here been replaced by a touchpad complete with glowing finger tips.The synthesis parameters are spread across two panels. The oscillators, mixer and amp envelope are on the first; the filters, LFOs and filter envelopes are on the second. In purchasing Magellan, I was wooed by the comprehensive selection of features, including oscillator sync, FM and ring modulation as well as subtleties such as 'drift' to simulate the pitch variations of real analogue. There's a unison mode that stacks oscillators for even greater excesses, while the dual filter system offers serial or parallel operation and 11 different filters, including formant, comb and notch — not forgetting a selection of low-pass, band-pass and high-pass types.

With so much programming muscle, I expected to be more impressed by the 240+ factory sounds. Generally, these were quite disappointing and most quaff deeply from the effects cup. Even basses don't escape a drenching in reverb — a reverb whose quality I guarantee not everyone will like! However, there are worthwhile original sounds to be created if you cut the effects down, restrain the resonance and generally turn off a few bells and whistles.

For instant gratification, the polyphonic step sequencer can address both synth engines — a real bonus for lovers of complex, intertwined sequences. A finished pattern may be stored into one of 16 different locations, and you can switch between during performance or arrange them into a basic song using 'Timeline', an implementation that's just simple enough to get used!

Finally, the effects are a major component in Magellan's sound. The list includes distortion, bit-crusher, flanger, phaser, chorus, stereo delay and reverb, and all can be active at once! As you can imagine, this provides a wealth of colours to invigorate the synth's slightly underwhelming raw tones. That said, Magellan's 16-voice polyphony and layering is impressive (eight voices are available from an iPad 1) and when you introduce an external MIDI controller, the dual synth engine does start to come alive. Incidentally, although MIDI is well catered for (there are 80 MIDI-assignable controls, plus sync, etc.) the synth doesn't respond to program changes.

For my money, Magellan doesn't yet threaten synths such as Sunrizer, Addictive Synth or Animoog but it is bi-timbral and undoubtedly feature-rich. If you relish in-depth programming and effects, or if you particularly enjoy step sequencers, there's potential here waiting to be realised. Paul Nagle

Readers with any knowledge of synth lore will surely know the name Wolfgang Palm, the developer of the ground-breaking digital wavetable synthesizers in the 1980s under the PPG banner. The original PPG went through a number of iterations, ending with the Wave 2.3 in 1984 (see Gordon Reid's Waldorf PPG Wave 3.V review in SOS April 2011 and John Molloy's retro look in SOS December 1996). While it may be tempting to compare his latest creation with its vintage predecessors, the new interface is so unique and makes such excellent use of the iPad user interface that comparisons are meaningless. This is the PPG of the future, and Wolfgang Palm has set the bar for others to surpass. 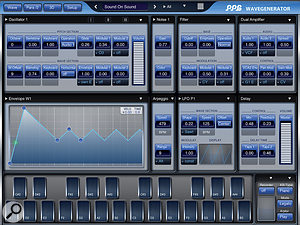 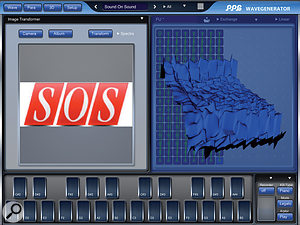 As well as allowing you to draw your own waveforms, PPG WaveGenerator can also transform pictures or photos into wavetables.The PPG WaveGenerator has just about every feature you would expect from a fully specified piece of hardware or desktop synthesizer. In summary: three oscillators, three noise generators, 24dB low-pass filter with overdrive, four LFOs, 13 envelopes, dual amplifiers, arpeggiator, delay and reverb effects, and up to 256 waveforms available per wavetable. Users can create their own waveforms by drawing and picking, as well as transforming pictures taken with the iPad camera or imported from the Photos app. There is a great in-app Help system, a Program Manager to handle patch storage, an internal recorder with the ability to record and share up to 10 minutes of stereo audio, and the ability to receive MIDI.

There are four primary pages: Wave, Para, 3D and Setup. The Wave page hosts the Wave Editor, Spectrum Editor and Wave Grid. It's here that you'll have the most fun creating and modifying waveforms and the way they connect to each other. The Wave Grid records your movements as you use your finger to pick individual harmonics or drag over a series of harmonics creating new waveforms. Connecting these in various ways creates wavetables. You may then create a linear path from any point in the grid, or individually select the waveform points to define a specific path. A 'Browse' mode lets you audition each waveform, and you can additionally modify waveforms, overdub on to the existing set and even swap the order by moving columns of waveforms. Users can also import wavetables from existing patches, or work with the supplied PPG wavetables and modify to taste.

The Para(meter) page contains a few unique features worth mentioning. Wave Offset allows you to shift the path inside the Wave Grid either horizontally or vertically to allow for subtle to dramatic changes to the character of the sound. Blending allows the waveforms to move smoothly from one to the next, or switch abruptly. The Glide parameter is unique to each oscillator, so you can create some cool polyphonic portamentos with different speeds when Legato mode is enabled. The Wave Envelope controls the speed at which the wavetable path plays. You can invert the shape of the envelope, resulting in the wavetable playing in reverse. You can also create envelope loops for more animated sustains. A unique feature is the ability to modulate the filter from the horizontal or vertical position on the key. These same controls can be applied to the wavetables themselves, the pan spread, and gain. This amounts to very expressive control from an inflexible surface. It's not unlike having aftertouch control.

The 3D page provides a visualisation of the first 128 wavetables. The fun really begins when you snap a picture or dig into your photo library for the Image Transformer to process. Here images are transformed into either waves or spectra. The results are unpredictable, but can be another source of interesting waveforms. Finally, the Setup page allows you to set the maximum number of voices (up to 20) as well as external MIDI settings. Version 1.0.2 introduces a Virtual MIDI In port, allowing the app to run in the background and be controlled by another app that supports Virtual MIDI Out. This opens up some interesting possibilities: I created some truly massive sounds controlling the PPG from Moog's Animoog and mixing the two together.

PPG WaveGenerator may be an app, but it is as powerful as any VI you'll have on your desktop. This implementation of wavetable synthesis is as fresh and exciting as the day its predecessor was introduced. Bill Lacey