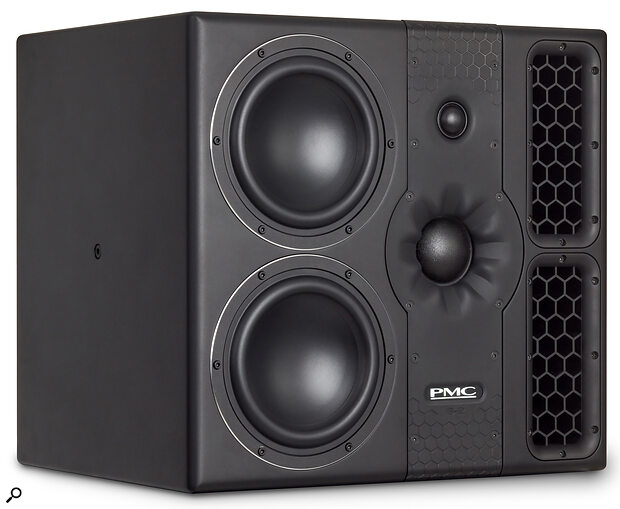 If anyone knows how to make a transmission‑line speaker, it’s PMC...

Despite writing about monitors in Sound On Sound for longer than I care to remember, PMC have never before found themselves the subject of my witterings. That is about to change because, dear reader, I bring you the new PMC6‑2. The 6‑2 is the middle model of a range of three new active monitors from PMC that covers nearfield to all‑but‑main monitor applications, the latter particularly when paired with one of the two equally new XBD active subwoofers.

PMC describe the 6‑2 as a nearfield monitor, but in dimensional terms I feel it falls into the overlap between midfield and nearfield. That’s a convoluted way of saying the 6‑2 is biggish for a nearfield monitor, but not so big that you’d take one look at it and immediately conclude it won’t fit in your studio space. At 21.3kg each, however, the 6‑2s are undoubtedly heavy, so any mounting hardware will very much need to be up to the job. To that end, PMC offer dedicated stands and a hanging yoke.

In terms of its driver complement, the 6‑2 is a three‑way system comprising two nominally 150mm (6‑inch), extended‑excursion, paper‑diaphragm bass drivers; a 55mm (2‑inch) textile midrange dome; and a 27mm (1‑inch) textile dome tweeter. As perhaps you will have ascertained from glancing at the pictures, while the bass drivers and tweeters appear relatively conventional, the midrange dome is a particularly unusual‑looking device. I’ll get around to explaining the reason for its appearance a little further down. The active amplification of the 6‑2 comprises ICE Power Class‑D modules rated at 400 Watts for the tweeter, midrange driver and each bass driver. The 6‑2 definitely is not short of amplifier power.

As with all PMC’s pro monitor offerings, the look is businesslike black with an almost complete absence of any aesthetic frippery. Only the polished aluminium circumference of the bass driver chassis and the honeycomb motif embossed in the plastic moulding that surrounds the tweeter and midrange drivers offer any contrast to the no‑nonsense look. And even the honeycomb motif is a visual reference to PMC’s ‘Laminair’ transmission‑line vent‑flow conditioner. Speaking of transmission lines, not having written about PMC in these pages before means that I’ve not had the opportunity to turn my thoughts towards the company’s Advanced Transmission Line approach to low frequencies. So before I move on to describing the 6‑2 in more detail, I’ll take a detour...

There are five basic techniques for managing the low‑frequency output of a moving‑coil transducer: open baffle, horn loading, closed box (sometimes called ‘infinite baffle’), reflex loading (in which I’d include ABR and coupled‑cavity systems), and transmission line. In order of popularity among designers the ranking goes: reflex, closed, horn, transmission line (although it’s a close run thing for third place I think) and, bringing up the rear, open baffle.

The problem that all of these techniques aim to fix is that, while speakers have to fit into human‑sized spaces, given the atmosphere we humans evolved to thrive in, the wavelength of sound at low frequencies is very long (6.9m at 50Hz). The upshot is that when a naked moving‑coil driver tries to reproduce a sound with a wavelength greater than its physical diameter, the reverse‑polarity acoustic energy radiated from the rear of the diaphragm will cancel the energy radiated from the front. The cancellation gets more effective as frequency falls but the result is typically low‑frequency silence, or as near to silence as makes no difference. Reflex, closed‑box and most horn‑loaded speakers aim to solve the problem by isolating the driver’s rear‑radiated energy from its front‑radiated energy through the addition of a box over the back of the driver. Thanks to the box, the rear energy can’t now escape to cancel the front energy and — voila! — audible bass is the result. The fundamental problem of using a sealed box to ‘hide’ the driver’s rear energy is that doing so adds the springiness of the air in the box to that of the driver’s suspension, and that pushes the driver’s fundamental resonance, below which its efficiency plummets, up into musically important frequencies. The bigger the box, the less this is a problem, but of course that brings us back to the need to make speakers fit in human‑sized spaces.

The trick that reflex‑loading adds to the concept of isolating the rear radiation in a box is a Helmholtz resonance. It comprises the ‘slug’ of air in a pipe (the port) bouncing on the compliance of a contained volume of air (the cabinet), and it works by reversing the polarity of the driver’s rear radiation over a narrow band of frequencies (around the tuning frequency). The reversed‑phase port radiation now reinforces rather than cancels the driver’s forward radiation and a useful gain in low‑frequency bandwidth (or power‑handling or efficiency, or a combination of the three) results. While reflex loading, all things being equal (well, box volume and efficiency), will result in more extended bandwidth than the closed‑box option, it has a snag in that both the reversal of phase and the resonance result in time‑domain issues. Phase reversal implies a minimum time delay of however long half a cycle takes at the frequency in question (40Hz, for example is a typical port frequency, and half a cycle is 12.5ms), and the nature of a resonance is that it rings on after its stimulus signal has stopped. So a reflex‑loaded speaker typically has trouble following the ups and downs of a stimulus signal as accurately as a closed‑box speaker — it’s always playing catch‑up or overshooting.

The transmission‑line solution to the problem of bass, as employed on the PMC6‑2, might look much like a reflex system — architecturally, it’s a box with bass drivers and holes — but it’s conceptually a different beast entirely. Behind each bass driver is a folded, foam‑lined labyrinth created by dividing panels within the enclosure. The two labyrinths (one per bass driver) end in the twin exit mouths on the front panel.

The function of the transmission‑line labyrinth in terms of its contribution to low‑frequency performance has two elements. Firstly, the labyrinth and its foam lining aim to fully absorb the rear radiation from the bass drivers as it travels down the line, stopping it from interfering with the forward radiation (or bouncing back through the bass driver diaphragm). The concept of dealing with the rear radiation by making it disappear is of course not dissimilar to that of reflex and closed‑box speakers. The difference is that a transmission line presents an entirely resistive load to the driver, whereas closed and reflex boxes present a reactive load — the air spring in the former case, and the air spring and reflex port air mass in the latter case.

However, absorption in a line of finite length will only work down to a specific frequency, and that’s where the second element of the transmission‑line labyrinth comes into play. Below the frequency where absorption stops, the labyrinth sets up a quarter‑wavelength pipe resonance that acoustically loads the bass drivers, significantly reduces their diaphragm excursion, and results in output through the line exits that reinforces the forward radiation. The frequency of the resonance is defined by the length of the labyrinth — in the case of the PMC6‑2 that’s 1.3m. However, a secondary (and really rather useful) effect of the labyrinth absorption is to slow the speed of sound in the line, which results in a longer effective length and, consequently, a lower quarter‑wave resonance frequency. In the case of the PMC6‑2, the quarter‑wave resonance frequency is 43Hz, which means the effective length of the labyrinth is actually around 2m and that the speed of sound in the labyrinth drops from the free‑air 343m/s to approximately 223m/s. The electro‑acoustic result of all this on the PMC6‑2 is low‑frequency bandwidth that extends down to 33Hz at ‑3dB combined with low distortion, impressive volume‑level capability and very well‑controlled time‑domain performance. 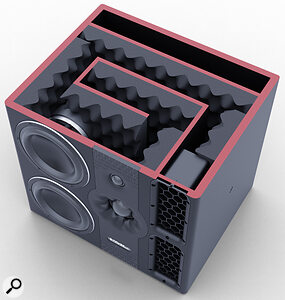 Diagram 1: Cross‑section of the PMC6‑2’s transmission lines.And with regard to time‑domain performance, while the purely resistive load presented by the transmission line in the fully absorbed portion of the low‑frequency band implies no additional time‑domain effects beyond those inherent to the drivers (ie. no extra group delay), the introduction of a low‑frequency quarter‑wave resonance sounds like it ought to be more of an issue in that respect. After all, the time‑domain effects inherent to the Helmholtz resonance of reflex‑loaded speakers are well known and often discussed. The transmission‑line difference is in the detail. In order to work effectively, the port resonance of a reflex speaker needs to have a high Q, which means its frequency response contribution is limited to a relatively narrow bandwidth and that its time‑domain effects can be significant. Peak group‑delay numbers well past 50ms are not unheard of. A skilfully designed transmission line, however, employs a low‑Q quarter‑wave resonance that contributes over a far wider bandwidth than a reflex Helmholtz resonance, and has significantly lower impact in the time domain in terms of group delay (which peaks in the 6‑2 at 15ms) or overshoot and ringing effects.

Evangelists for transmission‑line loading argue that the technique offers a superior solution to the low‑frequency problems of moving‑coil speakers than either reflex or closed boxes. If you look around the world of high‑performance speaker design, however, in either pro or hi‑fi sectors, you’ll see that transmission‑line designs are very much in the minority. The reason for this is not that transmission‑line evangelists don’t have a strong case — they do — it’s that the technique is expensive to implement and fiendishly tricky to optimise in practice (one PMC employee described it to me as “like juggling water”). The expense is significant due to the complexity of cabinet work that construction of an internal labyrinth demands, and the technical difficulty is due to the number of variables and degrees of freedom inherent to the technique. For example, balancing the labyrinth dimensions and internal damping so that upper‑bass rear radiation from the driver is absorbed while the quarter‑wave resonance isn’t over‑damped is not a trivial task. Take the ‘lid’ off a transmission‑line monitor like the PMC6‑2 and, as illustrated in Diagram 1, the internal components and layout look relatively simple, but they hide significant complexity and result from huge design effort and technical know‑how.