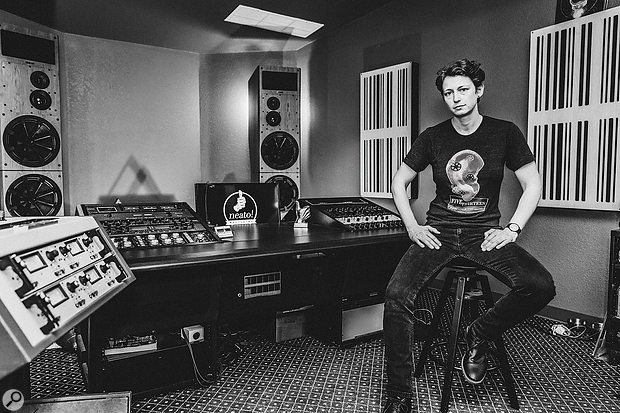 The move away from traditional studio production has opened up new opportunities for mastering engineers like Piper Payne — but it's also brought new challenges.

Piper Payne is not one of those mastering engineers who aims to impart a signature sound to the tracks she works on. When people do this, she feels, "it sounds choked off or held back". She prefers to let her clients "sound like themselves", striving to keep any contribution her work makes clean and open. "So maybe that's my sound!" she laughs.

To ensure that she gets the results the client wants, Piper likes to start getting involved during the mixing stage with projects she's going to master. "I want to get involved at the point where the mix engineer loves their mix but is open to suggestions that will make it easier to master. I want the engineer to love and own their mix. I don't want to finish the mix — although that happens a lot." To underscore this for her clients, Piper offers a line item consultation service called IncogNEATO: Remix, which connects clients with a "network of remixers, beat makers, and arrangers" for additional consultation before it's time to start mastering.

This is, in part, a response to changes in the way producers work; in the past, says Piper, there was more of a community built around the creative process. Producers and mixers worked together and provided feedback to one another, forming what she calls a "community filter". "That's one of the detriments to the industry: we work in a siloed environment now. But it can be fixed by taking a little more time to vet the mix. Instead, we have a bunch of people working in their bedrooms, and the artist is driving them to put stuff out really quickly."

For this reason, her advice to new producers and engineers is, "Just get out of your chair and go meet people. If you build a studio of your own, you don't get to check out other studios and you don't get to check your mixes. The best‑sounding records come from people who ask for feedback and perspective from other people. And that's about not having an ego: I ask opinions from people I trust and from my peers."

Piper Payne's own recommendations to mix engineers include not performing sample‑rate conversion on their masters — she has better tools for the job, if necessary — and to render their mixes in real time, while listening. This gives the engineer a final chance to notice clicks, distortion and other anomalies, and address them before the mastering stage. It might seem obvious, but things get missed all the time. "It's incredibly common," she says. "People are in such a hurry that they are not listening to how things are fitting in, or they forget to put the vocal in one mix but not the other. Listen to the capture!"

Once the project is ready to master, it makes its way into the system at her Neato Mastering studio in Oakland, California. Her ingest chain used to feature SADiE, but for the last three years Piper has been using Reaper to master everything. The first step is to make sure the client is done with the mix. (This might seem obvious, but it's an important step in the quality‑control process that shouldn't be taken for granted.) Piper or her assistant will listen through to each mix for clicks, pops, distortion and mix errors. She then uses Aurchitect's Myriad, a batch audio file processor, to verify that all is well from a technical point of view.

Analogue‑to‑digital conversion, and its reverse, is handled by her iZ RADAR Ultra Nyquist converters; these don't have the best specifications on paper, but as Payne points out, she's not listening on paper. "They're not the most accurate or linear, but it feels like I'm working in the digital domain while listening to something that approximates the experience of listening to analogue tape. That is undeniable about those converters. It's the most pleasing, correct sound.

"I need to listen critically over a long, long day on a system without feeling tired or fatigued. I have tried every converter you can think of in the never‑ending quest for the best sound I want in my studio. What kind of distortion am I not hearing? That's a question that keeps me up at night. And this set of converters with this system is something where I know I can hear what I need to hear. And that's the thing that an engineer should choose — what helps them work during the day."

Monitoring levels are part of the equation, and Piper begins work by listening at between 87 and 88 dB SPL (A‑weighted) for just five to 10 minutes, so she can see how the whole song goes together. "You have to get the room moving, you have to get the speakers activated, you have to get the 'unevenness' to shake itself out with some actual, proper level in the room." She will then turn the level down to around 78dB to work, and once she has dialled in the correct loudness for two to three songs, she sets her listening volume relative to those. She judges this using her body and how it reacts, even whether her trouser legs are moving, which she says tell hers a lot more than just relying on her meters and scopes.

Her target level depends on the genre. For louder hip‑hop records, she aims for ‑12 to ‑10 LUFS, for rock around ‑11 to ‑9, while singer‑songwriter material might end up between ‑14 and ‑12. Although loudness measurement in LUFS is now important, however, she still prefers to think in terms of RMS measurements instead. "RMS is an easier way of understanding how loud something is," she says. "In that case, it would be ‑5 to ‑6 RMS for very loud rock, ‑6 RMS for loud pop, or ‑9 to ‑8 dB RMS for a singer‑songwriter record."

To achieve these kind of loudness figures, Piper will push the gain staging, but not to the point of audible distortion. In order to hear what this sounds like, she recommends listening to the work she did on Madame Ghandi's Ghandi Blues or the upcoming album Release by ANML. Piper calls these perfect examples of a sound that is loud but not limited; ANML's song 'All The Beauty' is a good example of the strategic dynamic control strategies that Piper employs, with the transition between the verse and chorus being particularly crucial. "You don't want people to turn the volume knob down when the moment happens," she says. "There is such a thing as too much dynamic range, but what I'm doing is barely perceptible by listening to it — although technically it is the same energy and frequency content. It's about changing the feeling so it is perceived to be louder."

One of the reasons why Piper made the switch to Reaper is because it provides neat, glitch‑free ways of dividing a song into separate sections that can be processed individually. "You can break up the file in smaller pieces and the plug‑ins will play through without serious issues. It's not for every project, mostly pop songs that are way too smashed. In the old days, they would chop up and edit together different mastering chains for each verse and chorus. Now, Reaper lets me adjust the mix with a small adjustment on the EQ, for example, or a tiny different compression factor. It helps preserve the transition."

When I asked her why she doesn't just automate a plug‑in, she explains, "It's kind of like automation, but I don't want to feel a ramp of the attack time changing, for example. What I'm doing here is a lot different than having different instances of a plug‑in turn itself on and off. It's like automating with Lego!

"I use 1.25:1 or 1.3:1 ratios here or there, and later a final limiter on the output of the console. I use a lot of parallel compression so you can get the level up and up, but you're not choking anything or shaving the transients. That's the way I can achieve pretty loud records — but not sound overly compressed."

Loudspeakers are a vital tool for any mastering engineer, and Piper Payne is a confirmed advocate of PMC monitors. "They have this amazing ability to have an equal frequency and time response no matter how close you are to the speaker, whether you are listening at a low level or high level. Even up until you get very, very physically close to the speaker itself, it doesn't change. It doesn't require any DSP on the speaker or amplifier or on the front side."

She is equally effusive about the speakers' time‑domain performance, courtesy of their adjustable transmission‑line design. "The thing about transient response is that if you don't have all of the drivers doing what they are supposed to do at the same time, then you will have a smeared image. They have a crank in the back, like an articulated spine on the speaker, and turning the crank changes the timing. So there's a mechanical way that utilises physics rather than DSP that gives you the most impact."

Previous iterations of Payne's monitoring setup have employed tube amps, but the current version uses solid‑state amps commissioned by PMC's Maurice Patist. "Amplification matters so much," stresses Piper. "I was into fast tube amps like VTLs but once I heard these, I realised I could have the power and the quick and fast response that I need without getting tinny and crunchy. It's like torque. You get this power once you get up and running into the louder monitoring levels, a power that you never feel like you are going to run out of, but the same is true when you have quiet audio playing: you have support and detail and not a lot of distortion."

Piper Payne is a firm believer in the benefits of releasing records on vinyl, and to that end, she is co‑founder of and partner in a new vinyl pressing plant that is opening this year in Oakland, California. "I believe that tape is the best format that audio has every been released on, but it is not an easily consumed format. At one point, the vinyl industry was growing by 200 percent and now it's growing 20‑50 percent every year, with a combination of new and old vinyl sales and reissues. However, the number of pressing plants is down to 12 to 15 — total — in the world.

"If you have music you are trying to put a value on, it's difficult to do that with streamed files or digital downloads, but it is not difficult to put a value on a limited release, physical music product. It is still the best and only way for an artist to actually make a return on their investment if they want to make a physical product, and express themselves the way they want to with a high‑quality, analogue product."