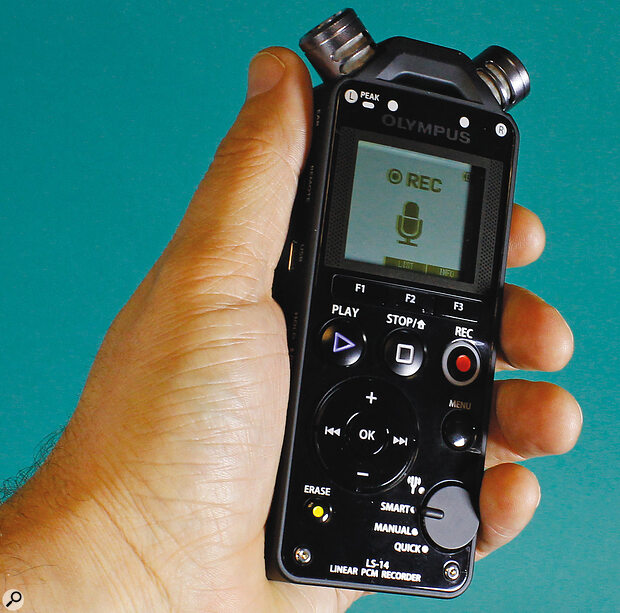 In the Tresmic array employed by this Olympus LS‑14 handheld recorder, a central omni mic is added to a directional L‑R stereo pair to extend the frequency response.

Is it common to combine an omni mic for LF extension with one or more directional mics for higher up? I’ve not given it much thought before, though I’ve seen something like that used in hardware recorders. Should I assume there are already established arrays for this sort of thing (ie. the inverse of a two‑way speaker, with a crossover separating the omni LF pickup from the more directional mids/HF of the other mic)? I realise directional polar patterns get more omni at lower frequencies, but I was thinking rather of the greater frequency extension of omnis.

SOS Technical Editor Hugh Robjohns replies: The short answer is yes, it is common. The longer answer is there are lots of ways of doing this, each with their own pros and cons. It is very common in classical recording circles, for example, to add ‘omni outriggers’ (spaced omni capsules) to the main coincident or near‑coincident stereo array. In general, the outriggers bring two useful gifts to the party: they add a spaciousness (particularly at low frequencies) that is often missing from coincident and near‑coincident arrays, which gives a better sense of space and depth to the recording. And secondly, they support the bottom octaves below 80Hz, where directional mics typically start rolling off and become progressively weak. Ask 10 recording engineers how to rig this kind of dual configuration, though, and you’ll get 11 different answers!

Ask 10 recording engineers how to rig this kind of dual configuration, and you’ll get 11 different answers!

The easy option is to rig an ORTF pair as the main array, with spaced omnis on the same plane but about 60‑90 cm (2‑3 feet) apart. However, since omnis inherently pick up more room sound the perspectives of the two arrays is quite different, and often I’ve found it better to rig the omnis separately around 2‑3 feet closer to the source, in front of the ORTF array, particularly with smaller ensembles. Some experimentation will be required with the actual separating distance and omni mic spacing to get a suitable match of stereo recording angle to avoid badly mismatched stereo imaging from the two arrays. In situations with large ensembles, or pipe organs, it might prove better to place the omnis well behind the main (directional pair) stereo array, to emphasise the spaciousness and room ambience.

In this kind of application, though, there is no requirement at all to introduce any specific filtering to ‘cross over’ between the two arrays; it’s just a question of panning the mics in each array hard left/right and mixing them together with an appropriate balance to create the required sound. In general, though, either the spaced omnis or the directional (ORTF, etc) pair will dominate the mix, with the other array supplementing at a lower level. If the two arrays contribute similar levels there is a risk of comb‑filtering effects.

However, where time and technology allows you could also introduce low‑ and high‑pass filtering to ‘cross over’ between spaced omni and coincident mics (or some other stereo array), respectively, if you really wanted — and it’s something Alan Blumlein experimented with in the 1930s. The idea would be to maximise the inter‑channel timing differences at low frequencies and inter‑channel amplitude differences at higher frequencies, on the basis that these are separate mechanisms employed by the human hearing system. A crossover frequency around 600‑700 Hz is usually preferred, but some juggling is required of the physical mic configurations and crossover frequency to match stereo recording angles between the two arrays across the full bandwidth, so that the stereo width is stable at all frequencies.