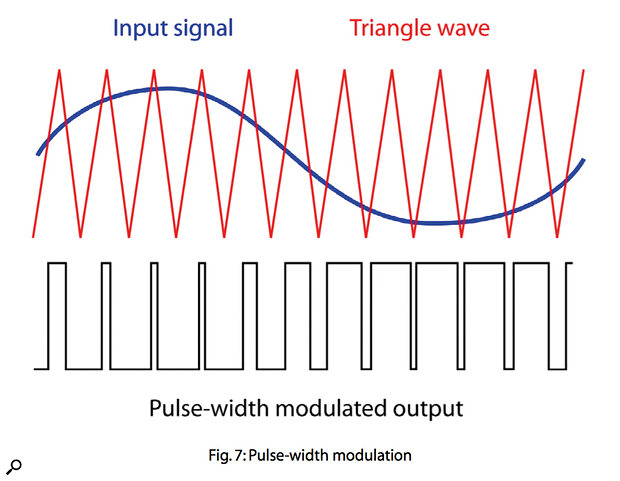 The ‘Figure 7’ diagram from our 2006 article on the different classes of amplification, as discussed in the main text.

I’m a long‑running technical electronics repair and design engineer working in music for film. In David Mellor’s article 'What Is Class‑D Amplification?' [SOS June 2006: https://sosm.ag/d-class-amplification], at Figure 7 I think he may have the waveform representation (colour blue) reversed in comparison to the PCM signal presented; if more square‑wave duty cycle pulses are high than low at a given time, the analogue waveform would also go high (polarity‑wise). I know it’s a petty thing but it might confuse some people. Also, at the end, he says in a class D you can’t find transistors because of large transformers, but this is actually the reverse comparatively to conventional amps.

SOS Technical Editor Hugh Robjohns replies: Hello Chaz, and thanks for getting in touch. I can see where you’re coming from, but I think you’re seeing the blue waveform as the (filtered) output of the PCM signal, which is not what the text describes — I suspect your experience in the topic might be causing you to read and see what you know, rather than what’s actually there and intended for novices. David is explaining how a PCM signal can be produced from the output of a simple comparator receiving the (blue) input signal and the (red) triangle wave.

What you say about the analogue waveform going high is true, but it’s not what David is trying to illustrate. To regenerate the same polarity of (input) waveform from the PCM signal as shown, it would be necessary to invert it, but that’s a complication that David has overlooked for simplicity in his explanation.

Regarding your point about transistors, I think what he’s trying to say is that the Class‑D amplifier circuitry is typically far more compact than a traditional Class‑AB design, and that its linear power supply and transformer might well be the largest physical section of the overall design (not that many Class‑D amps nowadays use linear power supplies, of course).