What Do You Get For Your Money?

Level Up By SOS Team

The world of music technology has undergone radical democratisation over the last three decades. So is there still a reason to choose high‑end over budget gear?

Today’s budget equipment offers specifications that professional engineers of days gone by would have killed for. Problems such as hiss and restricted frequency response are pretty much non‑issues today — so those new to recording might be wondering what advantage is to be gained by spending more than the bare minimum.

The answer is that it depends. It’s certainly possible to make good‑sounding tracks with highly affordable gear, but there are also good reasons why the pros choose the equipment they do. In this article, we look at five key product categories, asking what you can reasonably expect from budget options and looking at what you will gain as you move up to mid‑level and professional price brackets.

If you’re buying a studio microphone on a budget, you have more options today than ever before, and the good news is that many of these stand up very well, quality‑wise, against more expensive options. However, you’ll often find deals on unbranded or obscure models that look too good to be true, and these are best avoided. If you see a multipattern valve mic with all the trimmings on sale for a couple of hundred quid, it’s inevitable that corners will have been cut. Quality control will be poor or non‑existent, build quality questionable, and you’re unlikely to get support in the event that things go wrong.

Far preferable, and safer, to choose an entry‑level model from a respected manufacturer with a reputation to protect. If you’re buying your first studio mic on a limited budget, our advice would be to choose a fixed‑cardioid, solid‑state model. That way, you can ensure that your money is going where it really matters, and you’re not compromising on the basics in order to pay for bells and whistles you perhaps won’t use an awful lot.

The most obvious and versatile choice is probably a large‑diaphragm capacitor mic, and there are plenty of good options that won’t break the bank. These include the Audio‑Technica AT2020, Tascam TM80, MXL 990, Rode NT1A, sE Electronics X1A, X1S and SE2200, Lewitt LTC240, Avantone CK6, Samson CL7A, Sontronics STC‑2, Aston Origin, Lauten Audio LA‑220, Sennheiser MK4 and AKG C214. However, if your main applications are likely to be close‑miked vocals and/or electric guitar cabinets, it’s also worth bearing in mind good‑quality moving‑coil dynamic mics, while anyone doing exclusively acoustic instrumental recording might contemplate a stereo pair of small‑diaphragm ‘pencil’ mics. 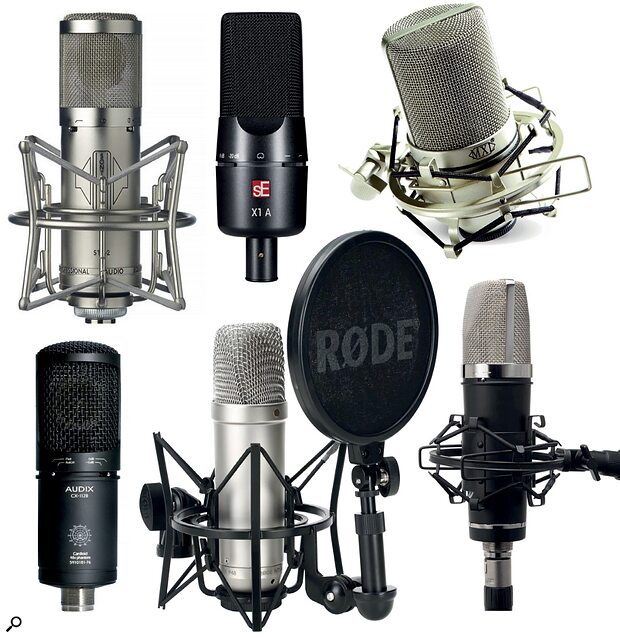 A cardioid large-diaphragm capacitor mic is the perfect starting point for any studio, and quality needn’t break the bank.

If these basic models are now so good, what advantage do you gain by spending more? In some cases, none. If, for example, you only ever use the mic for recording your own vocals, and an affordable model happens to suit your voice perfectly, there’s not much reason to upgrade. However, a bigger budget does open up additional options.

A more generous budget can also get you something more versatile. This typically means energising both sides of the capsule in order to generate other polar patterns such as omni and figure‑8. Multipattern counterparts to some of the mics mentioned above include the Rode NT1000, Golden Age Project FC3, AKG C314, sE Electronics 4400A, Audio‑Technica AT2050, AT4050 and AT4047MP, Sontronics Orpheus, Sennheiser MK8 and Lewitt LTC441 Flex. In this sort of price bracket you also begin to encounter recreations of vintage models, such as Warm Audio’s WA‑414 and WA‑87 R2, and Advanced Audio’s CM‑series mics. Valve‑based mics also start to be a realistic option, with established favourites including Rode’s NTK and K2, the Avantone CV‑12 and Lauten Audio’s LA‑320.

Nevertheless, there’s a reason why established studio classics such as the Neumann U87Ai, Beyerdynamic MC840, Milab VIP‑50 and Microtech Gefell UMT70S occupy yet another price bracket well above this ‘mid‑price’ band. That’s partly down to their status as classics, but it’s also because they are still made the old way, using expensive parts and a lot of skilled labour. The same is true of many modern ‘boutique’ mics — but be sure to do your research before buying, because there are also cases where ‘boutique’ cosmetics and pricing conceal generic Chinese capsules and electronics.

At the other end of the scale, meanwhile, a pro budget also makes available cutting‑edge new designs like Sony’s C100, Audio‑Technica’s AT5040, Josephson’s C705 and the Manley Reference Cardioid.

As long as you only need a couple of inputs and outputs, small USB interfaces can offer excellent audio quality at a very affordable price.f you make music with a computer, it’s rarely desirable to rely on the audio hardware built into that computer. Sound quality is often poor, especially on the input side, and you won’t have the necessary connections to hook up studio mics or loudspeakers. And on Windows, most audio software uses the ASIO driver protocol, which is not supported by many built‑in audio devices.

Fortunately, it’s possible to make a radical improvement in this situation at a modest price. The archetypal entry‑level audio interface for people who are serious about music would be a small USB audio device offering perhaps one or two mic/line inputs, a pair of line outputs for loudspeaker connection and a headphone socket. These are easy to use, can offer very impressive audio specifications and, with good driver support, will achieve low‑latency performance that is more than adequate for recording with soft synths, guitar amp simulators, and so on. 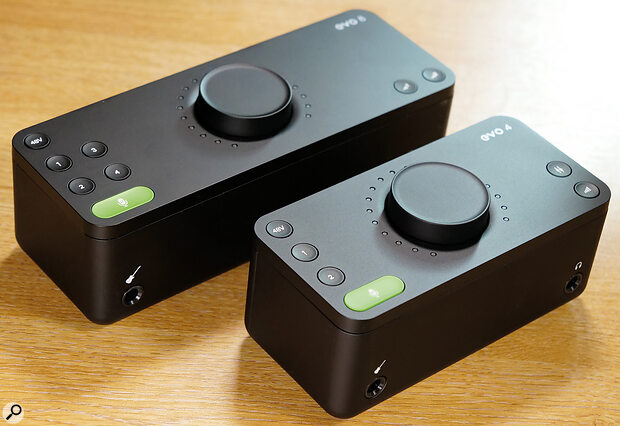 Once again, though, we’d caution against buying no‑name or unbranded interfaces, or budget models from manufacturers who don’t have a track record in this rather specialised field. There are all manner of frustrating and obscure problems that can crop up when you first dabble in computer recording, and it’s definitely worth paying a little extra to access the experience and technical support that an established manufacturer will have on tap.

If you only ever record one source at a time, or your music is based mainly around software instruments, an affordable USB interface may well be all you need. Once again, though, moving into what might be called the mid‑price bracket broadens your options. Most obviously, it gives you access to more simultaneous inputs and outputs, which is essential if you want to record multi‑miked drums, live bands and hardware synths, to integrate a modular system, or to provide headphone foldback to other musicians. With Steinberg’s UR‑C series, Focusrite’s third‑generation Scarlett range and PreSonus’s Studio interfaces, the affordable interfaces mentioned above represent the entry point to ranges containing several models with different I/O counts. 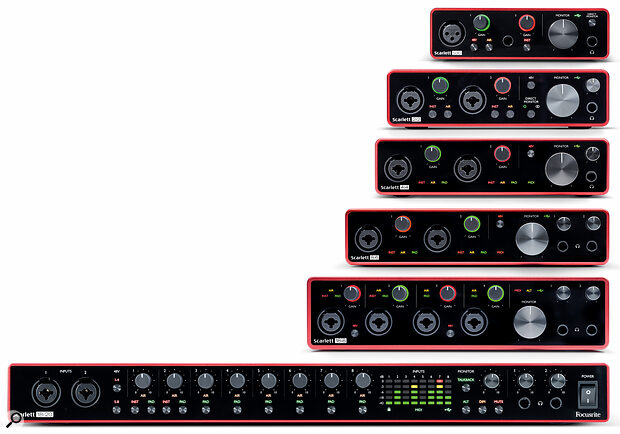 Focusrite’s Scarlett range contains a model to suit most needs.

Finally, a mid‑price budget also means you can consider Thunderbolt interfaces, which are typically more expensive than their USB brethren for the same I/O arrangements, but may offer better low‑latency performance and other practical advantages. You could also step up to an interface with even better audio specs and quality, such as Black Lion’s Revolution 2x2, Apogee’s Duet 3 or Focusrite’s Clarett range. 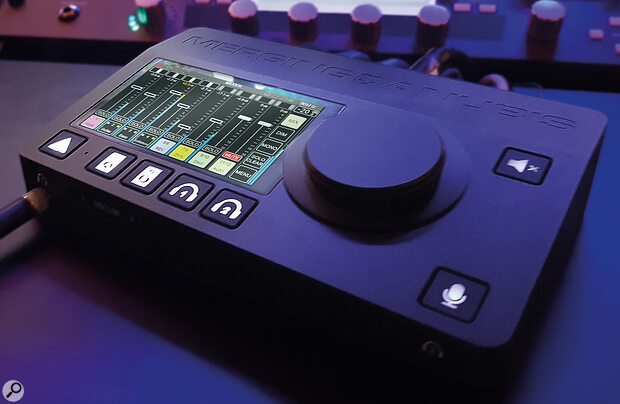 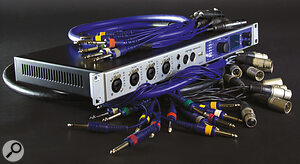 Masters of all trades: a pro budget can get you an interface like this Avid Pro Tools | Carbon, with enough flexibility to deal with most recording scenarios.Feature sets become much more diverse when you get into the pro price bracket. There are relatively few models that offer more than eight built‑in mic preamps, because the expectation at this level is that users will want to integrate their own preamps or mixer. So you can, for example, find interfaces such as the PreSonus Quantum 4848, MOTU 16A, UA Apollo 16x, Focusrite Red 16Line, Prism Sound ADA128, Apogee Symphony and Antelope Orion 32 that offer mainly line‑level analogue I/O, along with numerous models from RME and MOTU that focus on digital expansion formats such as MADI, Dante and AVB. 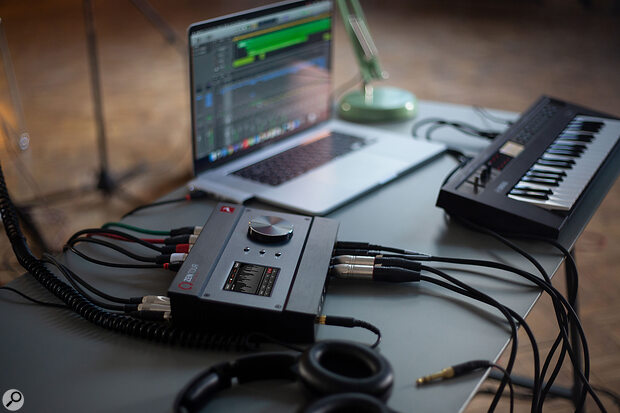 Your Questions Answered
6 days 22 hours ago.