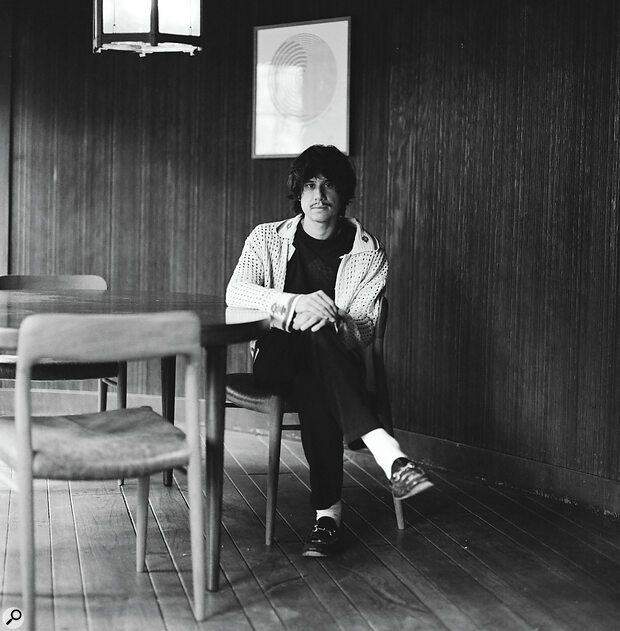 Having crafted some of the biggest hits in pop, Adam King Feeney, aka Frank Dukes, built an ambitious sample library to help others do the same.

Speaking is Adam King Feeney, better known as Frank Dukes, the name under which he has operated since the early ’00s. He has contributed to a swathe of major international hits by Drake, Eminem, Taylor Swift, Lorde, Kanye West, Camile Cabello, Post Malone, the Weeknd, the Jonas Brothers, and many, many more. Having cut his teeth in the hip‑hop genre, Feeney went on to become one of the world’s leading pop songwriters and producers. Since 2014, Feeney has won an astonishing 11 ASCAP Awards, 16 BMI Awards, three Grammy Awards, and 29 Grammy Award nominations.

Feeney says that his aim was “to be one of the best producers in the world and to work with the most exciting artists of our times,” and the above suggests that his is very much a case of mission accomplished. He also clearly is proud of the fact that many of the records he’s been involved in making have staying power.

“When I look at all my records, also my early hits, they were not meteoric, straight‑to‑number‑one songs. Instead they started slowly, and made their way up to the top 10 gradually. But once they get there, they stay in the top 10 longer than many other songs. I’m happy to be the guy who makes slow‑burning music that sticks around. I think there’s something authentic in the records that I produce that maybe makes them resonate on a deeper frequency than some of the songs that were designed to succeed.”

Feeney: I’m happy to be the guy who makes slow‑burning music that sticks around. I think there’s something authentic in the records that I produce that maybe makes them resonate...

Feeney has been invited countless times to share his secrets and process, but for some reason he has been reluctant. There are relatively few interviews with him online, and his appearance here is his first ever in a specialist music technology magazine.

Talking via Zoom from his home in Los Angeles, the Canadian traced his career so far. Feeney was born in Toronto, Canada, in 1983, received piano lessons when he was five, and went on to also play guitar and drums. In his teenage years he collected records, especially from the ’60s and ’70s, which got him interested in record production, and led him to buy an Akai MPC. He also got into skateboarding and via that into hip‑hop and DJ’ing.

In the early 2000s, Feeney took on the Frank Dukes name (based on a character called Frank Dux in the 1988 martial arts movie Bloodsport). He started working with rappers, doing remixes and getting placements, and he produced the track ‘Money’ for Drake. He also began a collaboration with producer Boi‑1da, and ended up working with many different artists, most notably 50 Cent, several Wu‑Tang members, and hip‑hop/jazz group BADBADNOTGOOD.

Frustrated by the practical and financial issues surrounding the clearing of samples, Feeney started to create his own, and in 2011 set up the Kingsway Music Library, which initially consisted of collections of his compositions that could be used as the foundation for samples. It has since become legendary, and has become a blueprint for how samples are made available and used, as well for the quality of samples in general. Countless artists and producers, amongst them Drake, Boi‑1da, Vinylz, Kanye, Mac Miller and Rihanna have used Feeney’s samples.

His next career move came in 2015, and followed a meeting with producer Louis Bell and Post Malone in 2015. It led Dukes to participate in the writing and producing of pop songs, with his name appearing on the credits of over 300 songs to date. Thirty of these have gone platinum.

“My career has taken many different forms over the years,” Feeney says, “because I was just following what I was most excited by at any given moment. In the beginning it was just the very idea of being able to make music. Sitting in my parents’ basement with my MPC making beats was amazing to me. Just the magic of starting with nothing and ending up with something. That was amazing.

“My next step was, ‘OK, it would be nice to work with other artists.’ So I get very excited about having rappers on my beats. Once I had done that, it was like, ‘OK, what’s next?’ I had made a beat for 50 Cent using a sample by the Menahan Street Band from New York, and they invited me to New York. When I went over I saw this process that was for me entirely new: real musicians playing instruments and recording themselves to tape, using vintage equipment. The results sounded texturally just like the records that I had grown to love and that I had been sampling. That was eye‑opening.

“When I get excited about something new, I just want to do it compulsively. So I got really into analogue gear and the process of recording on analogue. I maybe didn’t realise this at the time, but I was beginning to understand how my favourite records from the ’60s and ’70s and ’80s had been made, and the sounds I loved and had been sampling. Using analogue gear, I started making music that sounded similar, that I then used as samples.

“That was my obsession at the time. Eventually I was making more music to be used as samples than I was making beats, and I was sharing these samples with friends who were making beats. I set up the Kingsway Library to share these samples with everyone who was interested. This is how I got my first big hit record, when Boi‑1da sampled a piece of music by me for the Drake song ‘0 to 100’ [2014]. It led to a publishing deal and was the first time I made real money from music.”

Feeney regards his contribution to the world of sampling as one of his greatest achievements. “Many producers said to me, ‘You are known for your sounds, why give them to everybody?’ But I love the idea of sharing. I just like to make things I am excited about, whether I make money from it or not. There’s something unique to my experience that affects how I do things, and other people will use my sounds in different ways than I.

“I love the idea of making things that sound great and that ultimately contribute to the canon of music and makes music sound a little better. So I’m proud that what I have done with samples has contributed to evolving the musicality of hip‑hop. Non‑sample‑based hip‑hop music from before 2010 was much simpler and much less musical. The idea of making your own samples was new at the time. But today it’s all over.

“There are these kids everywhere who are just loop or sample makers who send their stuff to producers. That did not exist. I see kids making great samples of things like full string sections and you almost cannot tell the difference between something sampled from old records and what’s in the new music libraries. It’s amazing.

“While the archetype of that kind of...