Page 2: What Do You Get For Your Money?

Level Up By SOS Team 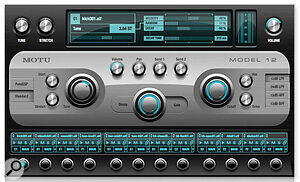 Not bad for free! Most DAWs now come with capable drum instruments, such as MOTU’s Model 12.Whether you’re using them to provide songwriting inspiration, as a placeholder for a real drum performance yet to be recorded, or to create finished drum tracks, software drum kit instruments are a key part of music production today. For this reason, most DAW software comes with pretty capable digital tub‑thumping options at no extra cost. Apple’s Logic and Steinberg’s Cubase have intelligent ‘virtual drummer’ instruments in the shape of Drummer and Groove Agent SE respectively, while PreSonus’s Studio One and Ableton Live come with more universal sampler instruments that are also highly capable sources of drum sounds. MOTU’s Digital Performer has the powerful Model 12 drum sampler, while the Avid Complete Plugin Bundle available with Pro Tools subscriptions includes the AIR Boom instrument. There are also innumerable freeware or shareware VST plug‑ins, samples and soundbanks around.

These bundled plug‑ins are all very capable, but even a modest budget targeted specifically towards drum software will open up other possibilities. Depending on how you spend it, you could target flexibility of sound at the mix, a wider variety of sounds or MIDI patterns, or perhaps sounds and styles appropriate to niche genres. 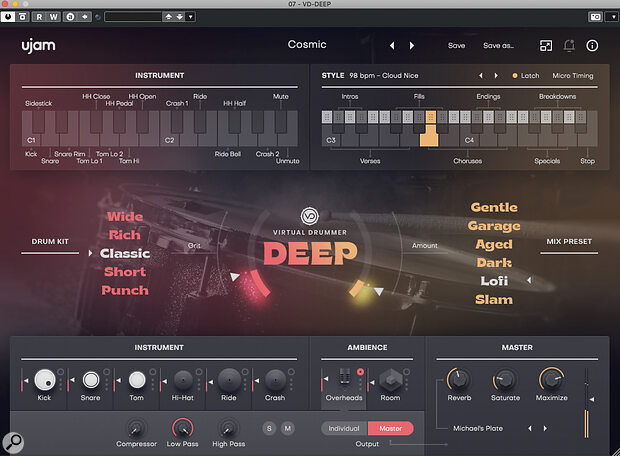 Many modern drum instruments include not only great drum samples, but also a virtual player to perform them.

For example, UJAM offer a great variety of ‘virtual drummer’ plug‑ins which are oriented towards specific musical contexts such as funk, soul, hard rock and so on, while Native Instruments’ range includes the likes of Butch Vig Drums and multiple Abbey Road Drummer libraries. Steinberg likewise offer an extensive catalogue of affordable expansion packs for Groove Agent SE — which is compatible with any VST‑supporting DAW — that dive deep into the sound and feel of particular genres.

Up your budget to three figures and the world of sampled drums is your oyster! 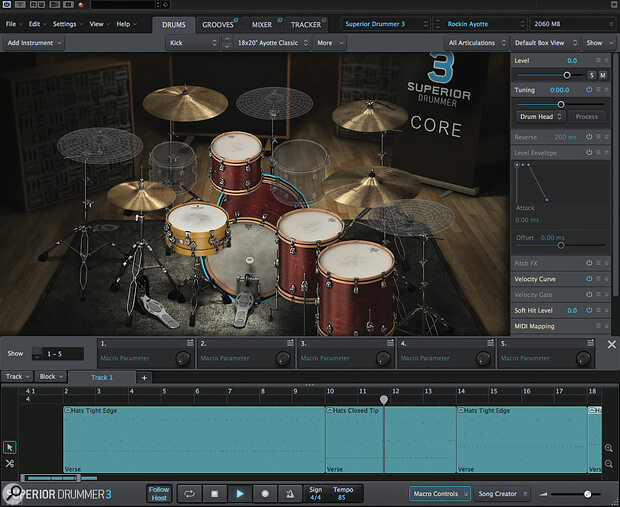 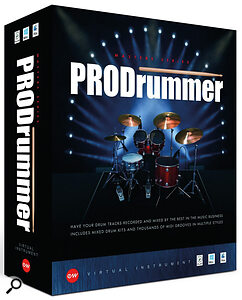 Options such as Toontrack’s EZ Drummer, NI’s Studio Drummer and XLN Audio’s Addictive Drums prioritise ease of use, letting you get a great sound fast, while engineers who demand the ultimate in control can explore the likes of Toontrack’s Superior Drummer 3, FXpansion’s BFD and Slate Digital’s Steven Slate Drums 5.

You’ll also find instruments that have a particular USP of their own, such as Spitfire Audio’s The Grange, Platinum Samples’ Ocean Way Drums and EastWest’s Pro Drummer. Companies such as UJAM and NI also offer collections of their mid‑priced libraries at very cost‑effective prices within this bracket.

Perhaps the best value of all, though, is to be had through subscription packages and bundles. PreSonus’s Sphere, for example, is much more than an affordable way to own Studio One and includes a huge amount of sample‑based content. Likewise, EastWest’s Composer Cloud and Slate Digital’s All Access Pass open the door to enormous riches for an affordable monthly fee.

With many tech purchases, there’s a strong argument to adhere to the old ‘buy right, buy once’ maxim, but as with microphones, once you start getting heavily involved with live sound you can’t have too many PA speakers! The budget PA you buy when you’re just starting out will always come in handy, even if you upgrade your main system, as you’ll often encounter situations where you need an extra stage monitor, side fill or drum wedge.

Budget PA systems have come a long way in the last 10 years or so, with most of the big names — Mackie, Yamaha, JBL and so on — offering good‑quality, lightweight active speakers with ample power for small gigs that won’t break the bank. Even the most affordable active system, such as those from DV’s Fame range, will be more than capable of elevating keyboards and vocals above the sound of a full drum kit.

Of course, your options open up as your wallet fattens. If sound quality is your biggest concern, then a little more money may net you a speaker with better (or more) drivers, or a wooden cabinet, which will tend to sound better than an equivalent plastic‑box speaker. Brands like Martin Audio, PreSonus, RCF, QSC and Electro‑Voice are popular choices for people looking for a step up in quality. LevelUp_Electrovoice_EV50M

Around the £1000 mark, compact line‑array‑type systems, such as Electro‑Voice’s EV50M, HK Audio’s Polar series, Yamaha’s Stagepas 1K, the Fishman SA330x and the Mackie SRM‑Flex become available. These sorts of rigs are extremely portable, and also tend to incorporate built‑in mixers, which saves you having to lug a separate one around. As a bonus, they’re also very resistant to feedback, which has made them popular in the pub/café open‑mic‑night scene. The LR Baggs Synapse portable PA speaker doesn’t quite operate in the same way as a line array, but offers very similar benefits thanks to its extra‑wide dispersion. 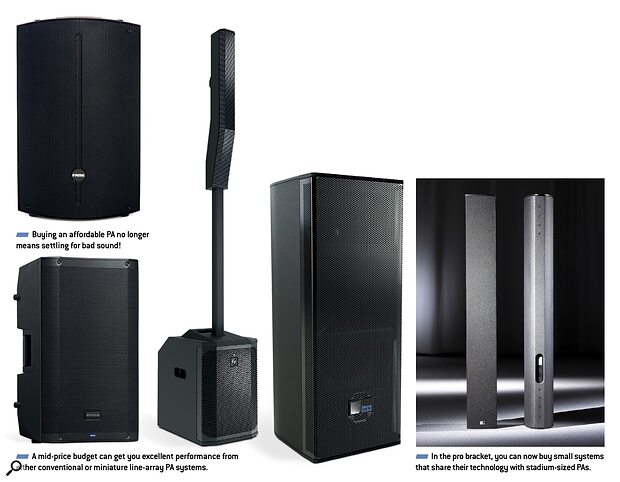 The really posh stuff tends to be intended for use in larger multi‑speaker arrays, though there’s nothing stopping you from assembling a small, compact, high‑quality rig from premium brands such as d&b audiotechnik, Meyer Sound and the like. High‑end column arrays are also available, and if you want to combine top quality with the convenience of a portable line array, then brands like Fohhn and FBT are the ones to watch. 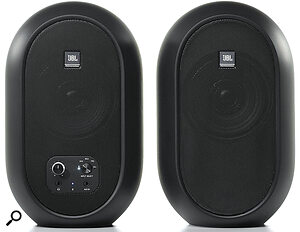 Value‑oriented ‘multimedia’ speakers can make effective studio tools, and frequently offer additional features.The affordable end of the monitor market caters to a wide range of people, from amateur podcasters to gamers who dabble in the dark arts of the DAW. These so‑called ‘multimedia’ speakers tend to be active (thus not requiring a separate amp), keenly priced, and compact enough to sit on a typical home office desk. They may not be the most accurate speakers around (for that you’ll have to pay more), but their manufacturers understand the need for convenience and ease of use. For example, the smaller PreSonus Eris models, JBL’s 1 Series, and Mackie’s CR‑X series of desktop speakers are available with Bluetooth connectivity, so you can stream music from your phone, tablet or laptop; while the Alesis M1Active 330 USB even incorporates an audio interface.

Many of these multimedia speakers also include a headphone output, and they also tend to have front‑panel volume controls, meaning you won’t need to buy a separate monitor controller. If you’re just getting started with music‑making then a pair of affordable desktop media speakers should see you right for some time with a minimum of fuss and cost.

When you’ve got a little more to spend on monitors, however, you’re expected to already have things like monitor controllers and audio interfaces. So, more expensive models may lack some of the conveniences of multimedia speakers, but they tend to be better engineered, made of more expensive materials, and be better at reproducing sound accurately. 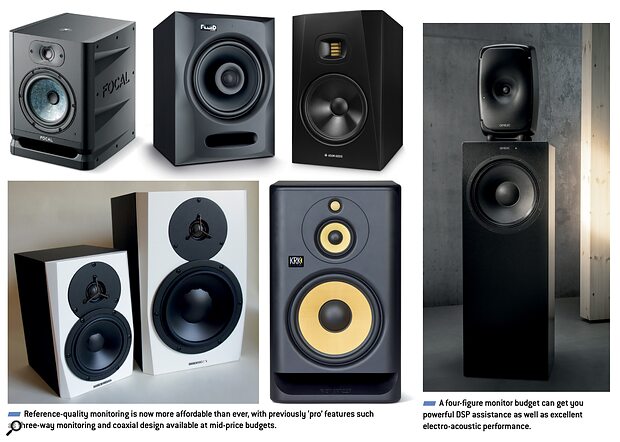 Between, say, £400 and £1500 per pair, there’s a huge choice of monitor formats available. There are some excellent traditional two‑way, ported designs, like the Avantone CLA‑10A, Dynaudio Lyd series, Focal Alpha Evo range and ADAM AX series, as well as coaxial models from the likes of Fluid Audio, KEF and Output. Passive radiators become an option at this sort of price range too, thanks to the Reproducer Epic 5 and Mackie HR MkII series. Even three‑way monitors have started to become affordable now, thanks to models like the Kali Audio IN‑5 and KRK Rokit 10‑3 G4. For more info on what sort of monitor would suit you best, see our recent feature about buying studio monitors at www.soundonsound.com/sound-advice/how-choose-studio-monitors

The rarefied end of the market can broadly be split into two. On the one side, you’ve got entirely passive loudspeakers from manufacturers such as B&W, SP Acoustics, Amphion and ATC, designed to be paired with the power amp of your choice. Those brands and their peers focus on the electro‑acoustic design of their speakers, with the cost justified mainly by their use of world‑class drivers made from expensive materials.

The other side of the high‑end market represents a marriage of this electro‑acoustic expertise with modern digital technology. Genelec, for example, employ extensive computer modelling in the manufacture of their speakers; and their monitors also incorporate advanced room‑correction DSP, as does ADAM’s S‑series and models from Barefoot, Kii Audio and Jones‑Scanlon.